“The mon-keigh need to be eradicated. They have been excavating for days, it cannot be a coincidence, it is only a matter of time before they find the artifact and the burial grounds. We must immediately launch an attack and secure the artifact and the lost stones.”
The other seers of the council pondered the words of farseer Mentelar. The Aeldari had been absent from the planet that the mon-keigh called Khai-Zhann for thousands of years, but they all felt the psychic feedback of that which was left behind.
“We cannot afford to get involved in the war of the mon-keigh, your request for a force of eradication is denied.” Farseer Ylmere answered.
“But we can also not afford to leave our ancestors to whatever the mon-keigh plan. You will lead the strike to secure the artifact and the stones.”

In the southern badlands of Khai-Zhann, an abandoned city has suddenly seen a lot of activity, as an insurgent force moved in and secured the area. With the area secured, excavators were set in action in the old city, ripping up streets and demolishing buildings, guided by rogue psykers. With Von Guyen himself in transit to the excavation site, the local commanders are keen to uncover the alien artifacts hidden below. Guided by the psychic feedback of the alien artifacts, several alien chests have been uncovered when suddenly, alien space craft blast into the city in a lightning strike, disgorging elite warriors who cut down the lightly armed excavation force.

As the eldar strike force make their way to secure their artifacts, a mob of renegades, desperate to not lose their price, launch a counter attack.

There were three objectives, one on the ground floor of the blue building top left, one on the scaffolding on the tall building in the middle, and one on the altar to the far right. The objectives signify uncovered artifacts and soul stone caches left behind by the excavators that scattered when eldar ships suddenly appeared. Units controlling the objective at the end of a round can pick it up and move with it.

The nimble eldar force strikes first, the wave serpent catching a unit of cultists in the open. Scatter lasers and shuriken cannons remove half of the cultists.

The war walker adds to the fusillade, killing all the remaining cultists in the unit on the right, leaving just the commander and ogryn pinned, but alive. In return, the technical drives up the hill, grabbing the objective and launching a barrage of rockets into the wave serpent, getting a lucky hit through the holo-fields, damaging the skimmer.

The fire dragons deploy into the forest and engage the technical, trying to stop it from driving off with the objective. Only two get in range however, and with the cover from the hill, the shots both missed the vehicle.

On the left flank, the renegades charge forward, the spawn getting in range to threaten the dire avengers. The eldar forces in the middle and left concentrate fire on the spawn, but two remain standing, and the dire avengers have to leave the objective behind to stay out of reach of the spawn.

At the start of the second round, a group of cultists use hidden tunnels to appear in the middle of the eldar forces. Combined with the mad headlong rush of the main line, the eldar forces are suddenly in a high pressure situation. They cannot end all threats before the renegades strike.

The eldar focus first on stopping the technical, the fire dragons moving up and turning five fusion guns on the lightly armored vehicle. Not surprisingly, the technical is blown sky high, leaving the objective on the right unclaimed again. 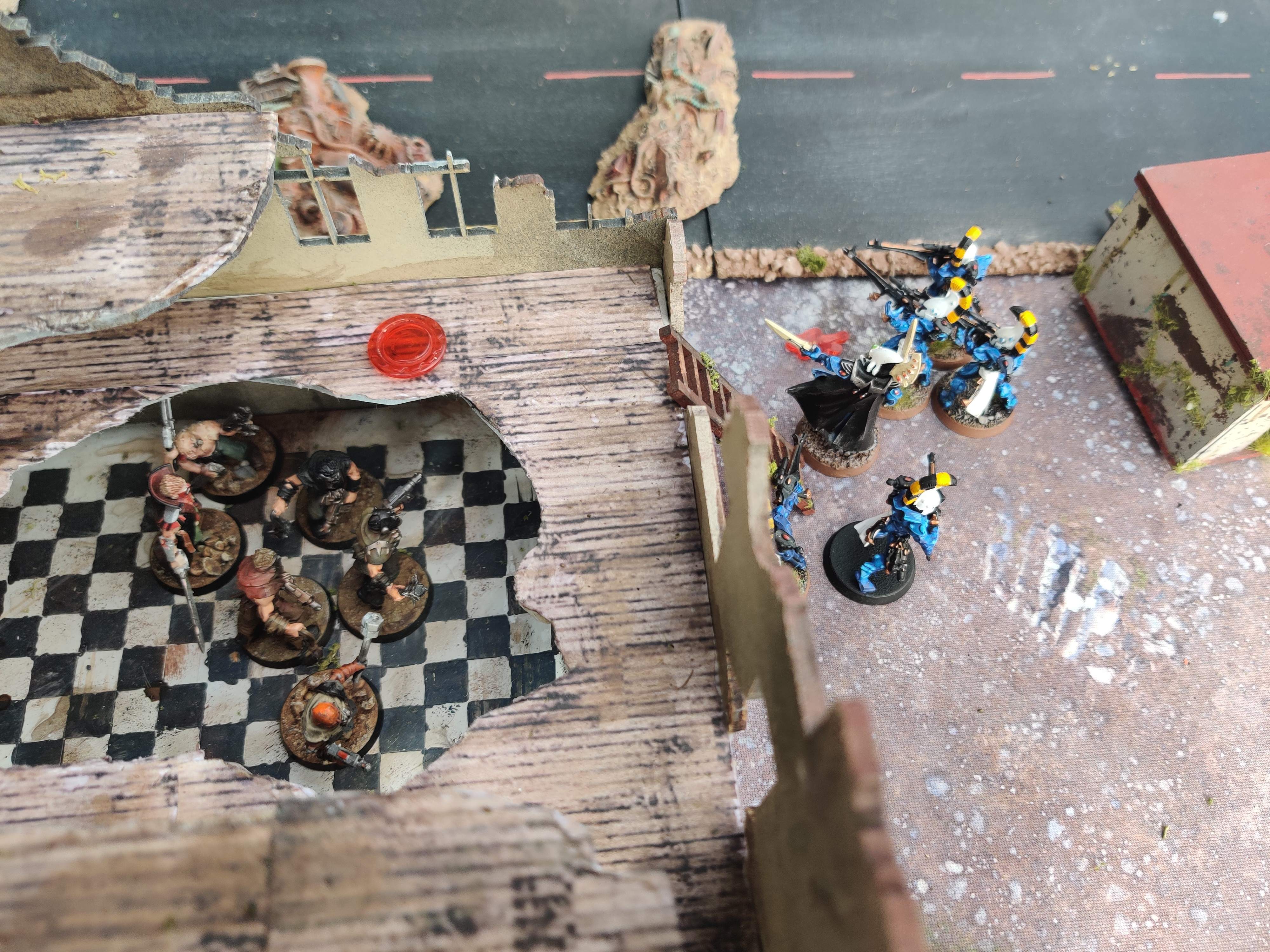 In the center, a group of cultists has snuck up on farseer Mentelar and his avenger body guards.

The cultists have been halved in strength, but the savage assault still takes the avengers by total surprise and only Mentelar remains standing. In return, he cuts down one of the attackers and drive them back with a psychic push. 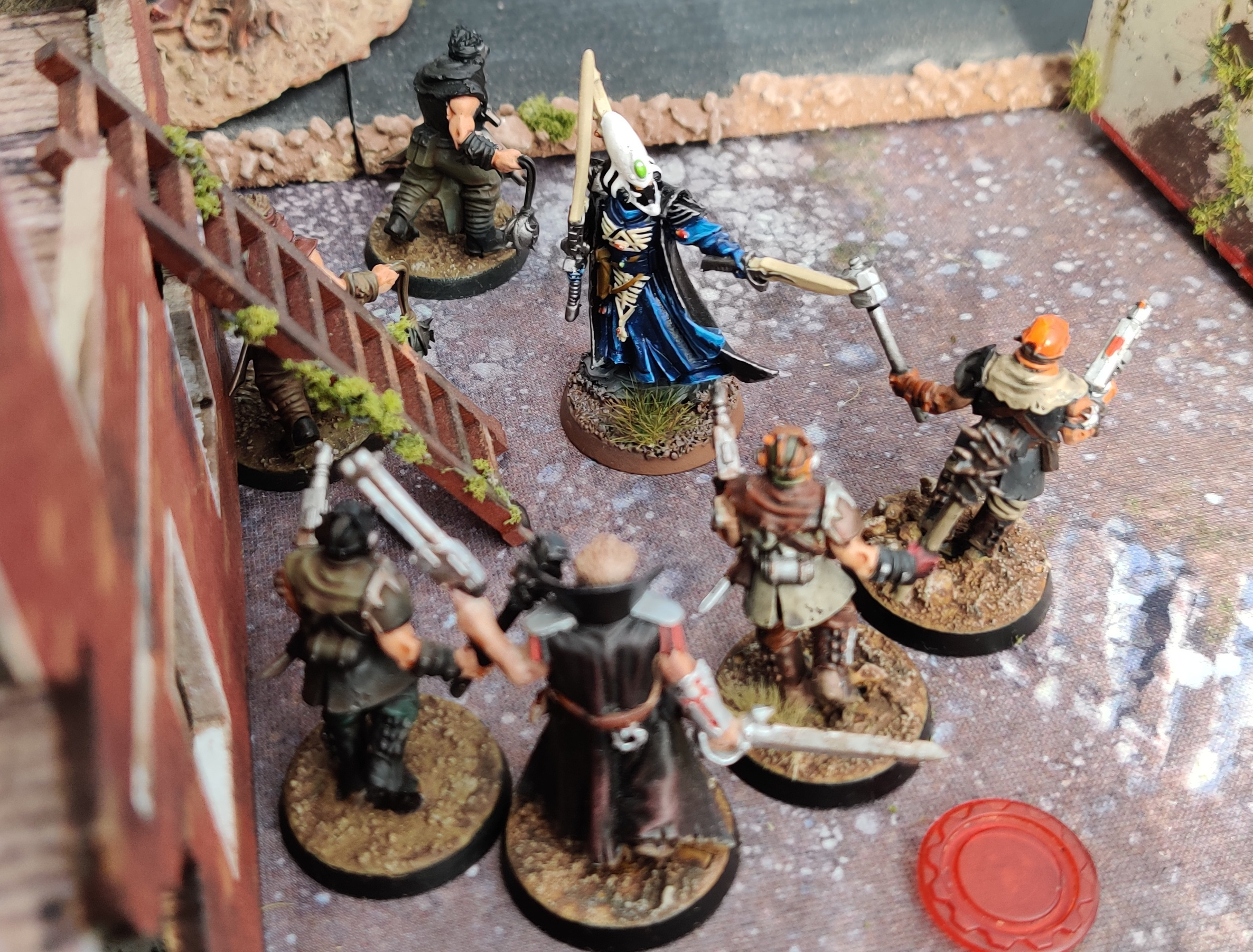 Mentelar sent a shockwave of psychic power that blasted his attackers backwards. They still surrounded him, but their assault was broken. He pulled at the powers of the warp, drawing runes of power in the air. The enemies around him turned and started to run. It would be of no use, he felt the fear in their feeble minds as he drew the rune that would pulverize their simple minds.

Mentelar never finished the last rune. What his opponents had noticed, and feared, came streaking in from behind. Of the seven hundred year old psyker, there was nothing but the crater of two anti-tank krak missiles left behind.

The renegade fire support squad split fire, sending two missiles towards the farseer while the rest focus fire on the jet bikes. In an astonishing display of accuracy, both targets are eliminated, robbing the eldar of two activations in turn 2.

The wave serpent turned on the ambushers, lasers and shurikens cutting down half of the cultists. The remaining kept their morale and charged out of the forest, engaging the softest target, the vyper. They got two hits in on the agile machine before it disengaged and jumped away, gunning down a commander on the right flank. The insurgents quickly countered however, a small group with three flamers hosing down the badly damaged vyper, incinerating the crew.

The war walker turned on the ambushers, and blasted them down to only two men left, practically taking them out as a threat.

On the left flank, the spawn charge forward, contesting the objective in the blue building. The middle objective gets secured by a small squad of cultists that then hides as best they can from the eldar fire power.

The eldar force is under pressure now, the loss of four units in turn 2 leaving them with precious little remaining to claim the objectives. They decide to focus on the left unclaimed objective, avengers gunning down one spawn, leaving just the exalted spawn. In return, the exalted spawn charge the avengers, ripping two of them to shreds. The remaining three stand their ground, pushing the beast back. Calling on support, the exalted spawn is blasted to bits as the war walker answer the call, scatter lasers bursting.

The remaining three dire avengers are now in control of the objective.

A few remaining cultists, worn down by eldar fire, but still holding their nerve, charge the war walker and get several telling hits on the light eldar walker.

The surviving technical moves up from behind, sending a volley of rockets towards the walker, one of them impacting, making the war walker belch smoke and sparks. However, the eldar pilot is still able to control the damaged engine.

The fire support squad, being the only ones able to now threaten the left objective, storm down from their vantage point, double timing through the streets to threaten the avengers. 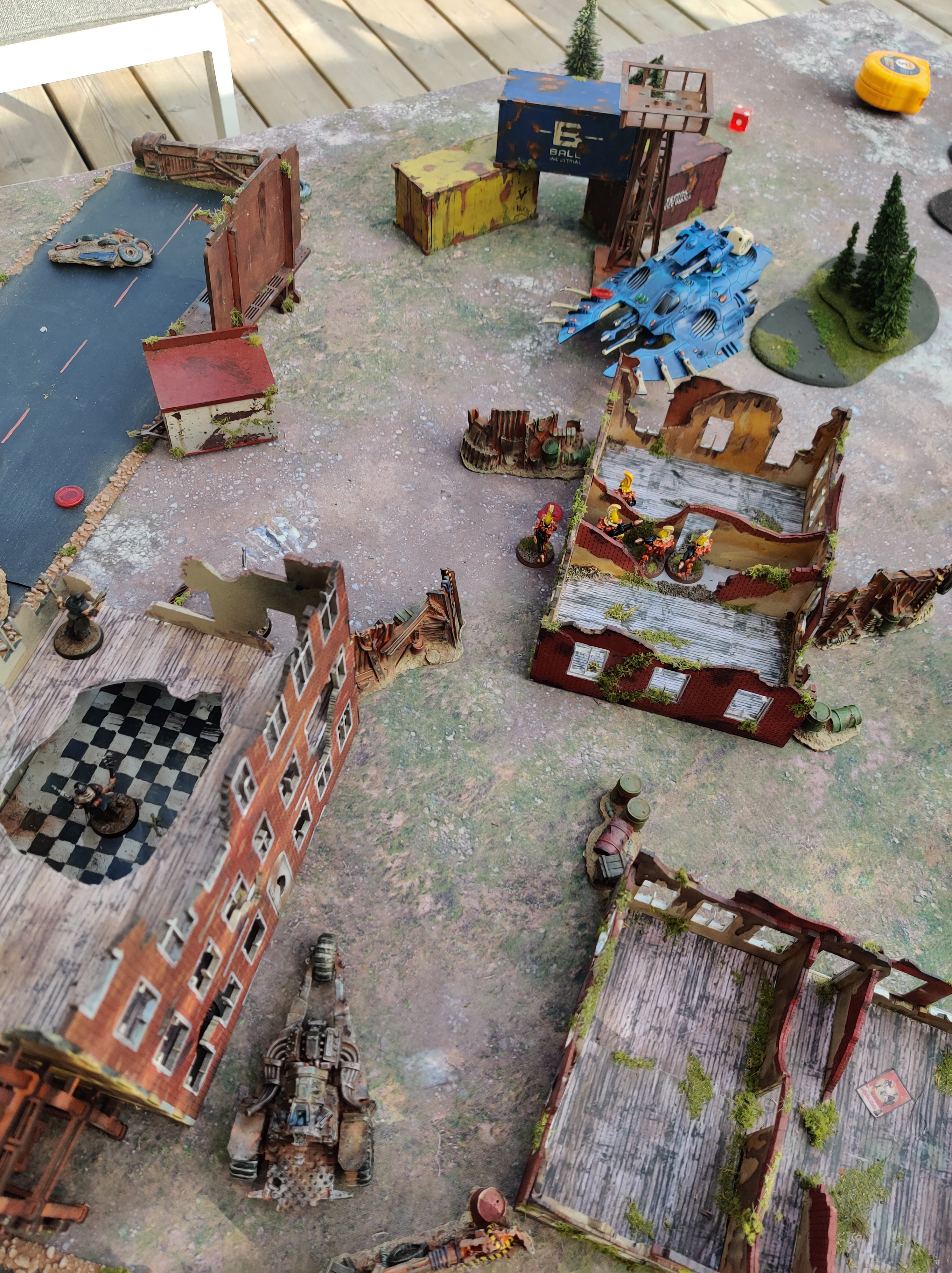 The wave serpent and fire dragons move up as fast as they can. Both the fire dragon and the war walker lay into the fire support squad, shredding over half of their number. The cultists hold their nerve however, intent on securing the alien artifacts. The fire dragons struggle with range, and only a few get in range of the technical, failing to destroy it.

The war walker get’s ambushed from behind, three flamers dousing it down. It is too much for the heavily damaged machine, and it explodes in flames.

The few survivors of the fire support squad move into the blue building, firing lmg’s from the hip, they down two of the three remaining avengers. The last aspect warrior stays his ground, contesting the objective.

This was my first game of the campaign against a human opponent (played outside on the porch with anti-bac and social distancing =) ) . While the AI work well, it is certainly more dynamic to play for real.

The eldar force was a totally new type of opponent, high quality, a ton of shots, extremely mobile, but also very fragile for their cost. The first turn, I just removed miniatures by the handful as eldar firepower plowed them down. I really felt like a brutal renegade commander just pushing my men to the death, hoping that enough would be left alive to retaliate later.

That ended up working this time, and especially the ambushing unit caused a ton of headache for the eldar. Turn 2 ended up being the critical turn, as I managed to remove two units before they got a chance to act, reducing the amount of casualties I took by a ton. That farseer was getting ready to explode the minds of the unit surrounding him on a 3+ when the krak missiles ruined his day =)

We will see if the eldar will return to exact revenge before the renegades are able to use the soul stones and artifact to their own nefarious purposes.

Von Guyen surveyed the excavation site. Builings were pock-marked with the impact of lasers, shurikens, rockets and bullets, the roadways turn up by blasted craters. Bodies lay strewn everywhere, mostly humans, but also a few alien warriors in blue armor. Looking at the shredded and blasted corpses being thrown into the corpse pyres, he was very happy that his flight had not arrived a few hours earlier.

He turned to the local commander, who was in the middle of recounting the heroic effort his force has made in driving off the aliens, silencing him with a flick of the hand.
“The stones?”
The man gingerly pointed to three alien looking chests piled on pallets. One of them, the workers had been unable to open. The other two contained what appeared to be pearl-like stones, neatly arranged in individual compartments. As he picked one up and studied it, he saw that the colors and shapes inside the pearl moved on their own. The stone was warm to the touch, he could almost feel the psychic energy of the stone, the energy of the trapped soul inside.

“So this is the secret weapon that will win this war?” He pondered as the chests were carried into the waiting aquila lander.