I got a couple of Tomb Kings job lots recently for a cheap price, and ended up with 21 chariots and a bunch of other stuff. With the boost chariots got in CoK18, I have been playing with the idea of building a Tomb Kings / Empire of Dust chariot army, and 2019 will hopefully be the year I build it.

I got some points to spare for items, and the list might change a bit when I actually get to play it, but the core will stay the same for now, as the goal is to have a list with a ton of chariots.

The basic game-plan is that the chariot line has enough nerve, speed and hitting power to delay, threaten and damage the enemy enough for my monsters to get surged into flanks and rears to clean up. Chariot regiments with -/15 nerve for only 115pts seem like a pretty good deal. The soul snare just looks too good now to not try it out.

I made my first chariot regiment to try out the basing and paint scheme. I decided to go for a clean look with dark marble-like stone features and bronze. The bases will get some tufts, but are otherwise done. The chariots might get some weathering, but I think I will wait with weathering more until I have the basic army up and running. 2/14 chariots done! 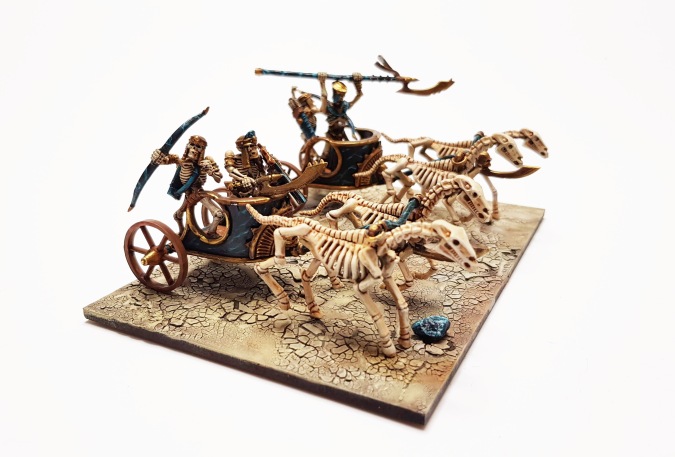 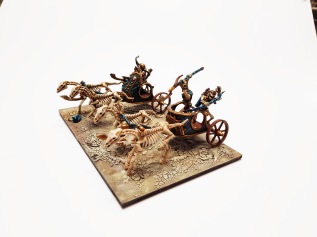 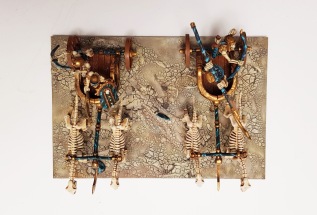