Kislev is a land of long, freezing winters and short, harsh summers. Because of this unfriendly atmosphere, the use of gunpowder weapons has always been rather limited. The Urugan Cannon or “Alexandr’s Organ” as Kislevites call it, is a notable exception.

The Urugan Cannon, named for the sharp, screeching sound that it makes when fired, is a lightweight cannon that works on the same principal as the Repeater Weapons of the Empire. It consists of several light, small barrels and a light wheeled carriage that enable the crew to move it from place to place quickly.

The Urugan Cannon shoots a virtual hail of lead shot, filling the air with whistling death. While much of the gun’s ammunition is wasted and the power of the Urugan Cannon is less than that of a regular cannon, it is almost impossible for the target to avoid being hit.

Because the Urugan Cannon can accompany the main units as they advance upon the enemy, it is much favoured by Kislevite Generals who are famous for their aggressive tactics.
– Urugan Cannon description from Kislev Armybook

My Kislevites finally got some real fire-support in the form of two Urugan Cannons. They are made from the old dwarf organ gun with carriage and crew from Bronzino´s galloper guns. The crew were Kislevified (totally a real word) and got proper mustaches and furry hats. They have slight puffy clothes, being city-folk southerners from the Kislev Guild of Engineers, they are more sophisticated than the average Kislev warrior.

In KoW, these are volley guns, firing 15 shots each with piercing 2, they will form a nice anchor that can make enemy units maneuvering for advantage against my cavalry pay. 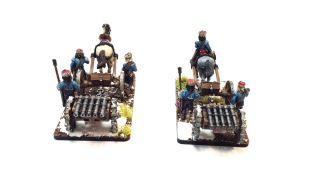 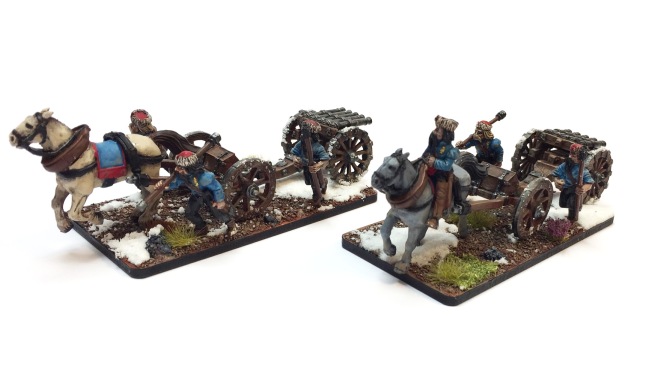