After 1 major loss, 1 minor win and 2 major wins, I ended up with 4th best general.
I also won best painted for the first time in my life, which I was extremely happy with 🙂
I ended up 2nd overall after paint and sports scores.

So with that result, I think my army played better than I had expected, showing that cavalry heavy armies can do well in KoW.
The army worked because I didn´t do too many mistakes. My two intro games I had before the tourney gave me one very important lesson;
DON´T CHARGE JUST BECAUSE YOU CAN!

Carefully sizing up every charge opportunity, often manouvering for advantage instead of just taking charges, was what allowed me to get the results I got. I also had a basic plan for the deployment of my army, so I never was totally out-deployed.

I also made a basic plan for most scenarios, and then I played conservatively, waiting for my chance to strike without taking too much damage in return. I liked the options my list gave me with this tactic, my shooting being essential to allow me to punish the opponent while playing the waiting game.

As I expected, my army performed to it´s very best when the enemy was low on chaff and when I was not outmatched speed-wise.

In my two other games, I was not able to remove the enemy chaff fast enough, and again, as expected, that sucks for the army. Although it was not as bad as I had thought. In hindsight, better use of my own chaff and my Boyar could have helped the issue. 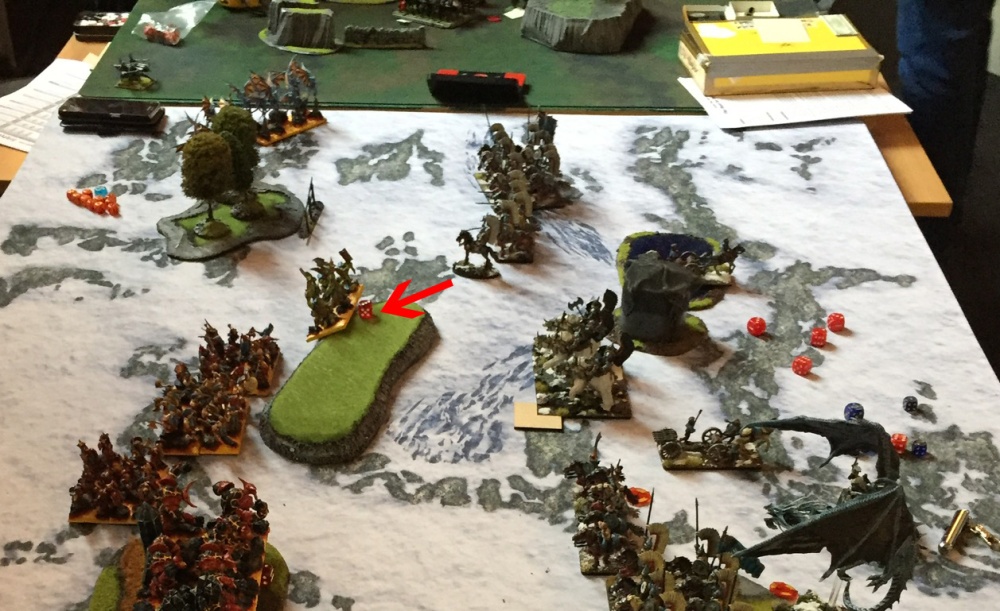 Take the above situation as an example, the Boyar I had on my top flank could easily have moved up to block the slave orks that practically took my Sons of Ursun out of the game. That would have brought the initiative back to me again, holding the slave orks up so I could trivially remove them with shooting or my Boyar next round, and allowing the Sons to go hunt some dwarfs. Similarily, in game 2, the Boyar could have moved up aggressively to block werewolfs, baiting them to charge him and cop a charge from lancers in return, or face being slowed down. The arrow shows where I should have placed him. In the game, it was pure luck that he kept the werewolfs busy for a round.

My Boyar was generally not played as tactically as he could have been. There seems to be a lot of nuance and tactical potential in individuals, which I am looking forward to getting better at using.

Tzarina Katarin, diadem of dragonkind (ancient aralez) – The Tzarina really lives up to her impressive stature. She was one of the most important pieces in every battle. I can really see why fliers are so popular, they very easily dominate games with their power and great tactical options. The diadem I took for fluff reasons actually worked better than expected, fitting well with my tactic of playing conservatively, allowing her to help clean out chaff and hurt the enemy while waiting for her chance to shine. A flyer is also practically an extra pathfinder unit in an army that has little access to pathfinder, which is worth a lot! She hung around happy in forests, charging out when needed without issue. Heal however is still basically useless on her. A
Winged Lancers Regiment, catterpillar (household knights) – The winged lancers are not the shiny overachievers of the list, but they are generally solid, projecting lots of threat, doing consistent damage and overall functioning well as the core of the list. I did actually forget that they have fury though, so several times they were wavered, and I just let them not counter-charge like a moron 😛
Catterpillar is very nice to have on these guys, giving them much more tactical options. They love hanging around in woods with Tzarina, waiting for a charge opportunity. B+
Winged Lancers Regiment, fire oil (household knights) – I only got to use fire oil once, but then it was worth it´s weight in gold, allowing me to waver the Troll King with defense 6 on a single frontal charge. If I had not stuffed up my deployment in game 2, they could also have gotten to use it against mummies. Otherwise much the same as the above, but with slightly less tactical options. B
Winged Lancers Troop (household knights) – I was unsure about these guys or more horse archers, but in hindsight, these were the right choice. They are punchy enough to take on small annoying units, cheap enough to be chaff if needed, and dangerous on flanks. B
Sons of Ursun horde (Honor guard) – It is very nice to have a unit that just throws in lots of attacks, and CS1 ensures they can always punch back decently. When they got to charge in unhindered, they were a sight to behold, cleaving through enemy elites like butter. They functioned as a great anchor unit in the center. The haste potion was awesome, in my opinion, it is the decisively best magic item choice for this unit. Total tally for this unit was: slave orks, mummies, zombies, king on chimera, sons of koorgan, ogre warrior horde, giant. A
2x Ungol Horse Archer Troops (halfling ranger cavalry) – While a bit expensive to be used as chaff, their high speed + nimble is great for tactical chaff options. During the tourney, I ended up misplacing these guys several times. They seldom got to support each other firing at the same target, and as such, their fire was often not very useful. The exception was when they aided the urugan cannons. With only two units, I did feel that they didn´t contribute as much as in the two intro games.
Surprisingly for my opponents, they also got to charge several times in the tourney. The 14 attacks in a flank are not to be scoffed at, they put 2-3 wounds on tough units like the golems and werewolfs with those flank charges. While not decisive in these two cases, it quickly can be. Good tactical pieces for scenario play as well. B
2x Urgan Cannons (halfling volley gun) – Man these guys are awesome. They ended up doing exactly what I wanted when I put them in my list. They put pressure on the enemy, giving me local shooting supremacy in all four games. They punished enemy units while they manovered for advantage, several times removing the offending unit totally, shifting the balance heavily in my favor. Killing the vampire and the direfang riders in particular was a thing of beauty. It was also fitting that they are modelled as gallopper guns, as I moved them surprisingly much around. For max efficiency, I would add another of these guys to my 2k list, but I don´t think I will prioritize that conversion now. A+
Boyar on horse, spark stone (Baron on horse) – As mentioned in the overview, I did not use this guy as well as I could have. I also threw him away against the ogres, trying to be smart with him and threaten the Boomers, but just giving him away instead. Spark stone was only used once, which saved me from a breath attack from the Troll King. Decent enough, but for 20pts and 50/50 chance, I am sure it is not the best use of the points. The lute of darkness stares at me in disbelief that I would take the spark stone over it. Although the gargoyle FAIL showed that the striking sword is a very high priority item for a combat hero with only 4 attacks. Him not inspiring halflings also removed some freedom in deployment, as I generally then didn´t want more than max one unit of halflings on his side of the board. I think that having a bane chant option would have gotten me a lot more than this guy did. C-

With 200% more experience, I have gotten some ideas for what I should prioritize converting and painting up to get my army to 2k.

Flyers are awesome – If I didn´t care about fluff or looks, I would get myself a unit of flyer allies + a flyer hero. Drakons, Elohi etc. They don´t really fit my army at the moment however, so in their place, I will add the Gryphon Legion Commander, Tordimir Lubovasyn on his Gryphon. He will tag in for the Boyar, as the Boyar will be put up against other individuals for review.

Bane chant is as good as they say, and fast individuals give lots of tactical options –
It was painful when my opponents got off bane chant and smashed my defense 5 units. I want to do the same when my lancers lose TC. That means that the individual joining my 2k list will have bane chant. There are currently 3 likely options, all mounted to allow them to get where they need to be for bane chanting or running interference;
1: Ice sorceress (wizard) with inspiring item and bane chant @100pts
2: Boyar with lute of darkness @105pts
3: Army standard with lute of darkness @85pts
The choice will depend on if the pts difference is important. The sorceress has the benefit of adding shooting to the list as well, while the Boyar can fight, although that does make his role a bit ambigious. The army banner is the cheap option, providing just bane chant, inspiring and an individual to foil enemy plans with.