“Shit, they are everywhere!” Gunfire richocet off the brickwork Janus was hiding behind. He quickly hit the floor, returning fire blindly with his 10mm handgun.

“Damn raiders! Can´t an honest merchant be allowed to make a living in this blasted wasteland?”
Yvette crawled over to his position.
“All the others are dead! It´s just the two of us left!” Her voice was quivering. Janus knew the two of them had no chance against the raiders.
“Throw away your weapons and we will let you live!” One of the raiders shouted.

Janus sat up against the wall. Maybe he should just end it now so he at least would not be captured alive. Just as he stared into the black hole at the end of the barrel, his finger resting on the trigger, the world exploded with the sound of lasers and automatic weapons. Shouts of wounded, dying and fighting people enveloped their position.
Invigoured by the change of fortunes, he peaked out of cover. All around the raiders were falling. Red laser beams criss-crossed above them, and precise bursts of automatic fire cut down the disorganized raider bums. In just a few minutes, the raiders were all dead, and their unknown saviors stepped into view.

There were men clad in fully enclosed radiation suits, armed with assault rifles. Military issue robots walked alongside them, and in the middle, a giant of a man, clad in power armor commanded the group.

Janus grabbed Yvette by her shoulders.
“We´re saved! This is a fucking intervention by God!”
“Are you sure?”
Janus ignored her, raising to his feet, he waved his arms and shouted to the group.
“Hey, thanks for saving us! We are forever in your debt!”
Yvette also stood up beside him.

One of the robots turned against them.
“Threat spotted. Level 3 aggression. Initiating termination protocols.”
A bright red beam shot out from the robot, piercing Yvette´s chest.
“No!” Janus screamed as his loyal lieutenant dropped to the ground. He threw away his 10mm.
“We are friends! Honest traders!”
Two of the men in radiation suits advanced upon him. Janus smiled at them to calm them down. He took a step forwards and stuck out a hand to greet the man closest to him.
“Thank you for saving me!”
The man stopped a meter in front of him. Janus stared into the blank black glass face of the suit. He saw his own reflection. Even before his reflection was covered by blood, he knew.

“I think this was the one.” Corporal Anderson bent down over the dead merchant, pulling back the trench coat on his right arm.
“Yep, we got a Pip-Boy, mission complete.”

These guys are my Preservers force for This is Not a Test. They are the “University” faction. A tech-heavy group holed up in a secret bunker under the university. They send out Extraction teams to locate and scavenge for advanced pre-war tech.

With fully functional hazmat suits and modern assault rifles, these guys can search and scavenge areas where normal wastelanders can`t go for old world relics. The group operates with a shoot first, shoot after policy towards the barbarians of the wastelands (everyone not in their group).

The rank and file are the hazmat suited seekers armed with well maintained H&K G36 assault rifles. They are all Hasslefree hazmat troopers straight out of the blister. Great quality miniatures. 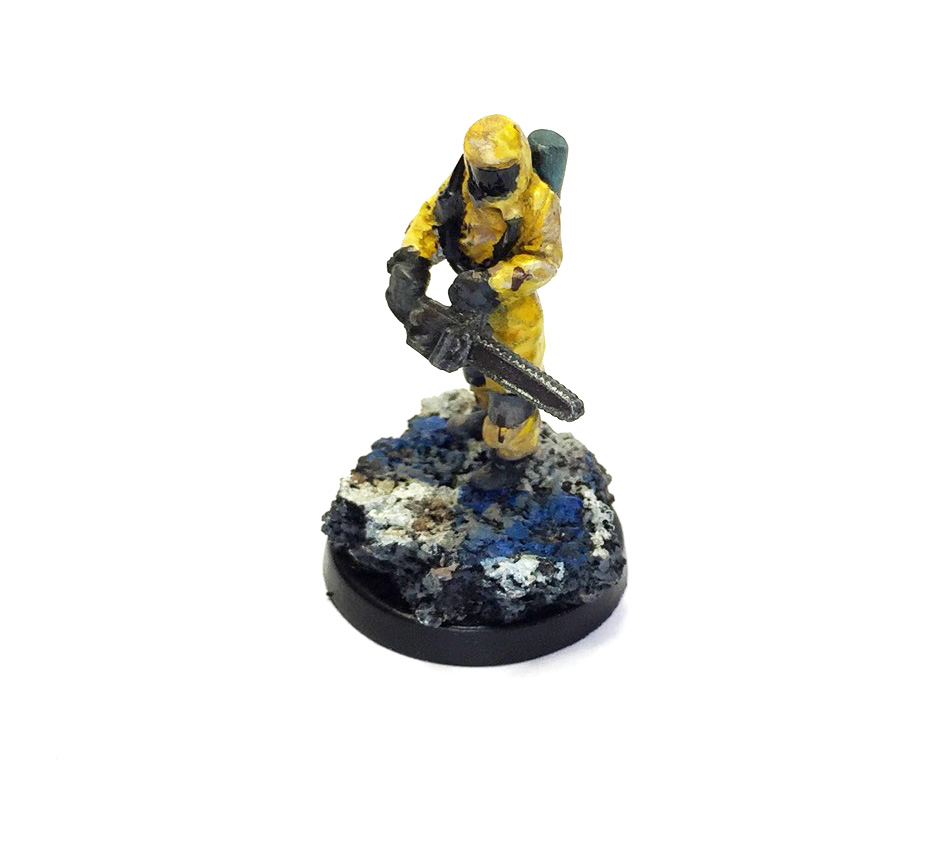 The group prefers ranged combat, which is where they dominate, but they also have a close combat specialist for those cases where you have to get close and personal. Armed with a chainsaw, the breacher takes on the dirty work of sawing through reinforced doors and fleshy creatures. He is a converted Hasslefree hazmat trooper. 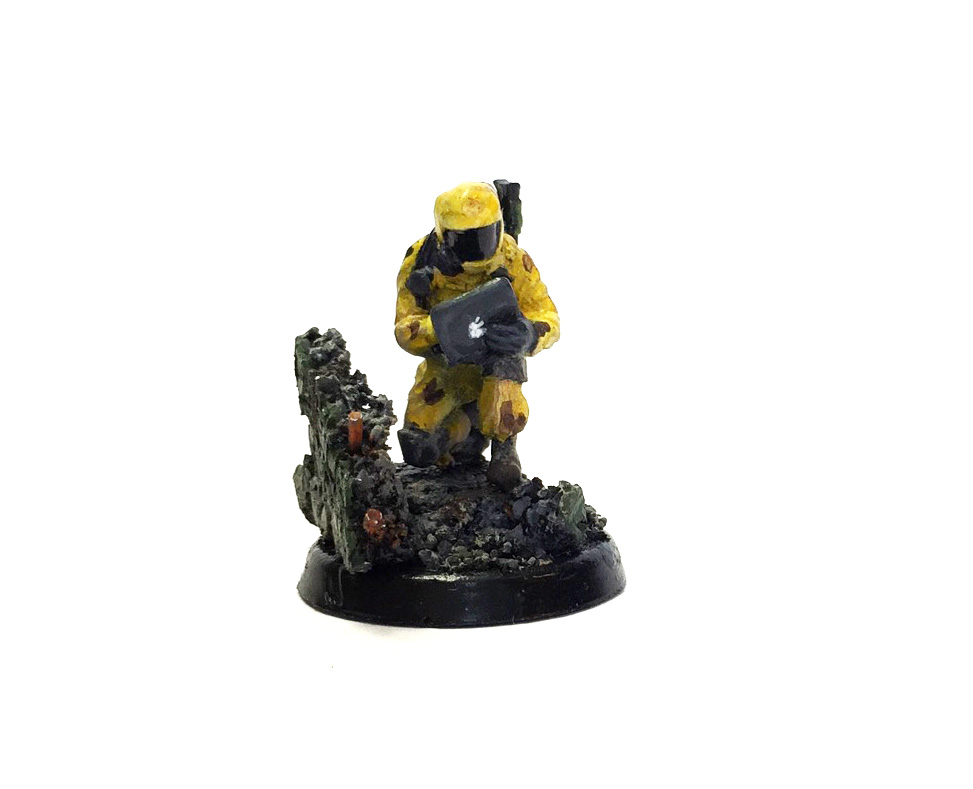 The tech-bearer ensures the robots are well maintained. He is also the link to the University bunker. Here he is seen communicating on the most advanced hardware in the wasteland. A true tech connoisseur 😀

He is armed with an SA80 assault rifle. Inferior to the rifles carried by the mainline seekers, but still plenty more than the average wastelander. The figure is another hasslefree.

The University has a large stable of salvaged pre-war robots. An elite society, they much prefer throwing robots into battle instead of valuable humans. The robots are a Protectron, and Eye-Bot and a Mr Gutsy. The Eye-Bot is the team healer. All three figures are from Brother Vinnie. 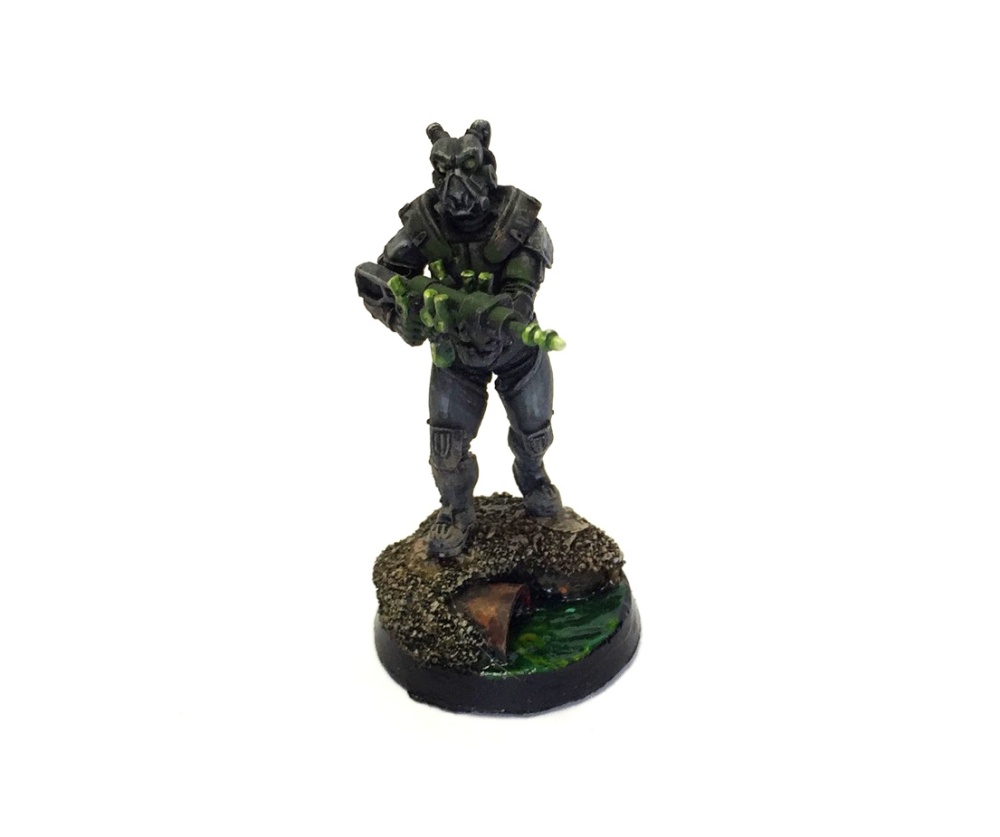 The University Captain is another Brother Vinnie figure. Clad in advanced power armor and armed with a plasma rifle, he has a powerful impact on the battlefield.