These guys have been almost finished for a long  time, having even seen battle already. Especially the banner was a victim of procrastination, taking me a week to work up the motivation to start 😛

In the end they turned out well though. The unit is mostly the original Kislev kossars, with some additions to break it up. In the front rank, a Mordheim Middenheimer has been included as a “berserker” type. Another Middenheimer is in the middle of the unit. The front rank also has upped their sexy by including a miniature I found on ebay as “kislev ice queen”. Unfortunately, her face was either miscast or just has very flat features, so it was very hard to paint. Her boobs were very well-sculpted though, so I guess nobody will look at er face anyways 😀

The unit also includes a couple Westfalia miniatures, the Ogre and the cape-wearing gal at the rear. I was dissapointed by the quality of the Westfalia miniatures as there was extreme amounts of flash and the details were soft and shallow. The Ogre was the exception, coming in resin with very paintable details and a great look. 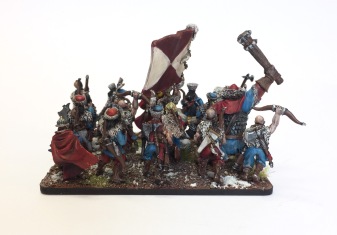