For game four, I was again up against Orcs in the invade scenario, which is a scenario that fits orcs fairly well.

A more offensive orc list than the first one I met. While orc lists often look very simple, they do get a lot of nerve and offense for their points, so they should not be taken lightly. My plan was to remove as much of his hitting power as possible with ranged attacks before the melee grind begins. Again the list has a ton of fast individuals that can make my life “interesting”. 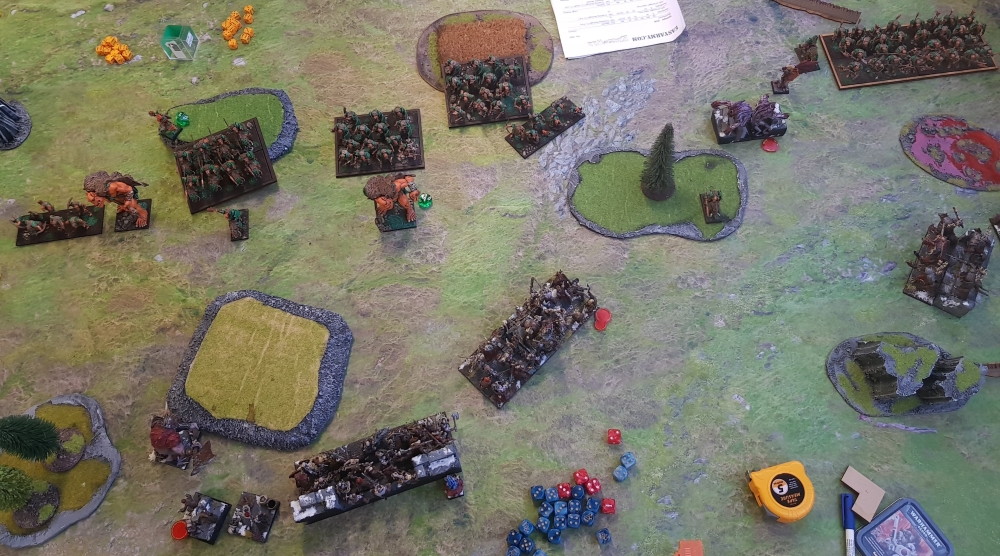 Unfortunately, I did not remember to take a picture of deployment. For me, it was the same as usual, with my left flank anchored by the Troll king, the center held by the bloodsworn and the rest loading up the right flank. I won initiative and my right flank quickly got to work, taking a unit of gore riders out of the game, creating a gap in his lines that the devourers and Magnhilde poured into. The fallen and cave dweller threatened the greatax from the front, while one devourer eyed their flank.

In the center, my bloodsworn hordes and troll king baited the giants in, with the plan being that they would give up a flank to the middle bloodsworn horde if they went for either. 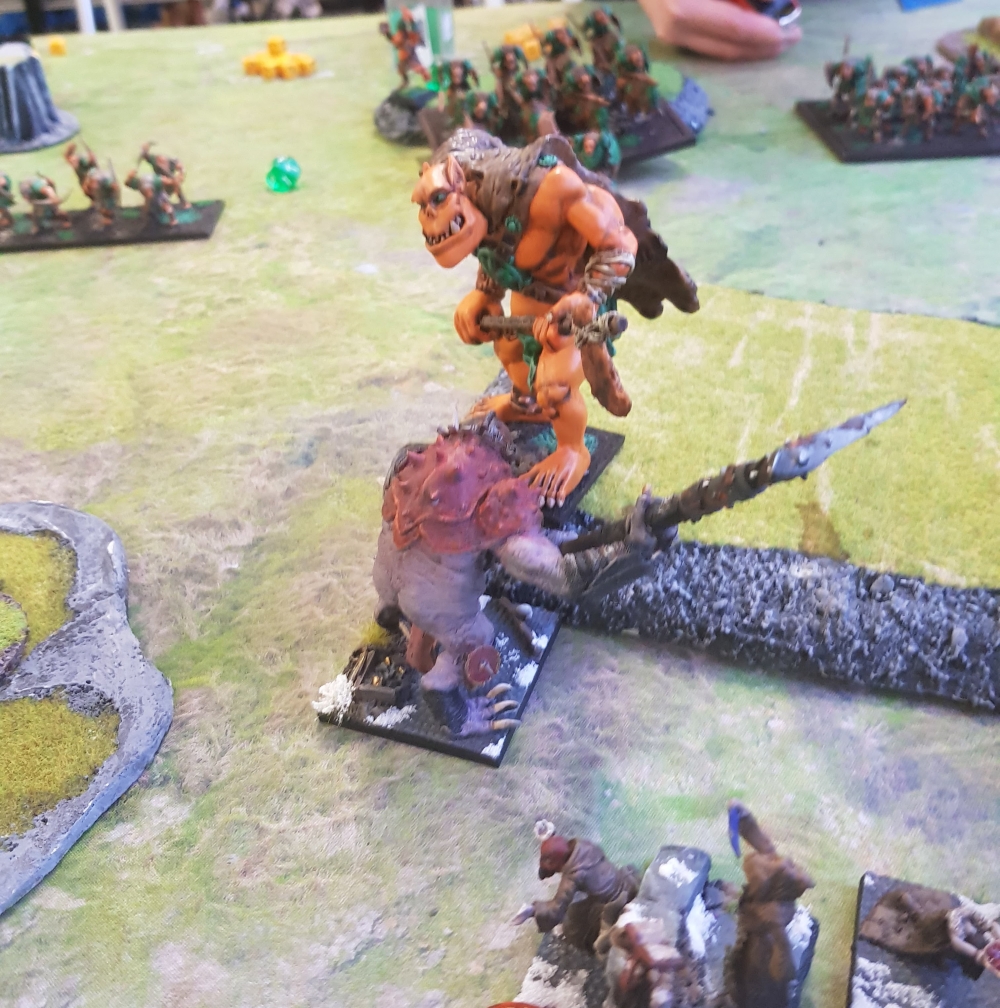 The giants complied and took my bait. One giant charged the troll king, but fluffed and did no wounds.

The other giant took advantage in a flaw in my plan and charged the would-be flankers in the middle, while a Krusher charged the last bloodsworn horde and managed to keep them busy for 3! rounds. It took 75 attacks to kill the 10/12 nerve bastard off. I hate individuals 😦 The unit of gore riders followed up into the gap between the giants, intent on joining in next round.
Other places, my forces were also engaged. One devourer was charged by Skulks, the other by a Krusher. My cunning plans were thrown into disarray for a while as I had to get rid of the wave of chargers before the dangerous next wave arrived. 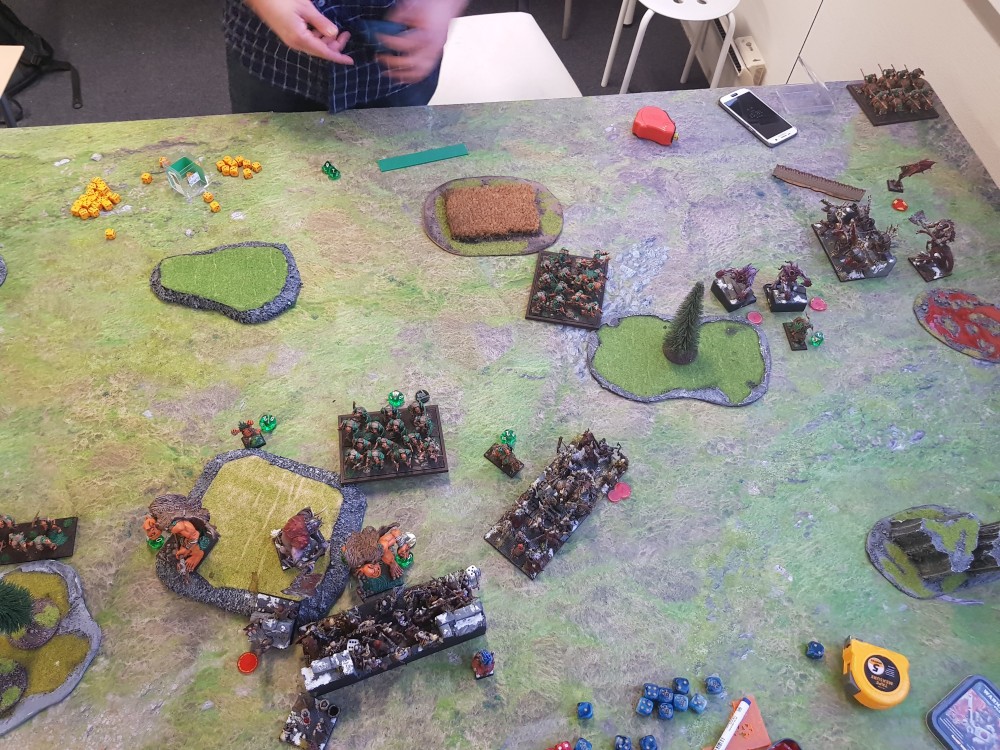 Luckily, the placement of the gore riders on the hill was in line of sight of my Troll king, and he promptly left the giant alone and charged their flank, wiping them out and getting into a very dangerous position for the orcs. The left giant was then left with no targets the following turn.

On the right flank, things also went my way, when my fallen charged the Krudger, who was unfortunately for the orcs standing in a way which gave me an overrun into the greatax. The greatax were already charged by Magnhilde and the cave dweller, and that was too much to handle. The devourers in the meantime flailed about, destroying the skulks, but not the Krusher.

In return, the moreax killed off a devourer. 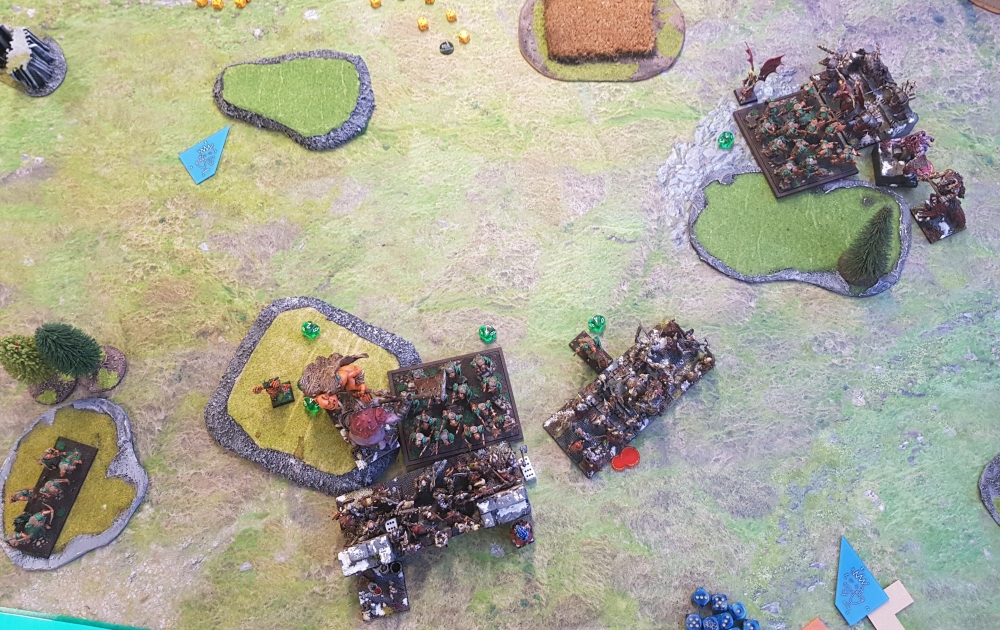 Into the late turns of the game, my right flank all charged the moreax and the Krusher, predictably killing them both, leaving me with 4 unit strength in the enemy half. They had taken their time to do it though, and my opponent had 4 US in my half as well. I had killed one of his giants, but because of the immense uselessness of the right bloodsworn, the moreax and second giant had gotten into the game again, and where threatening to win the grind. In the end however, the Krusher holding up my flank bit the dust, Magnhilde got in to help out, and the wounded giant and moreax could not hold against the attacks and both folded, leaving me the winner in the end.

This game was at times closer than I liked. My plan to hold back and shoot him away for some turns failed, as his giants and individuals managed to get into pretty much my entire line in turn 2. This bought time for his infantry to get into the action as well, and if not for some mistakes by my opponent that I profited greatly from, this could have easily swung the other way.

MVP: Troll king for keeping the flank safe, taking several rounds of giant to face and wiping out a giant, a regiment of gore riders and a regiment of moreax.