In game two, I was up against an opponent that I traditionally have very close games against. I have managed to squeeze out victories in our previous tourney meets, but it has often been by a very thin margin. This time however, I have a new army, and he had done a lot of changes to his line-up, and now had a MSU type undead list.

His list has a ton of unit strength, 21 to my 12. He out-drops me a lot as well, so he has the advantage in deployment. However, his list is lacking a bit in hitting power and is fairly slow, so I felt fairly confident that I should be able to grind him down in the middle with my shooting followed by high nerve hordes, taking the middle loot token, while getting my loot token over the board. I expected him to get his over the board as well. 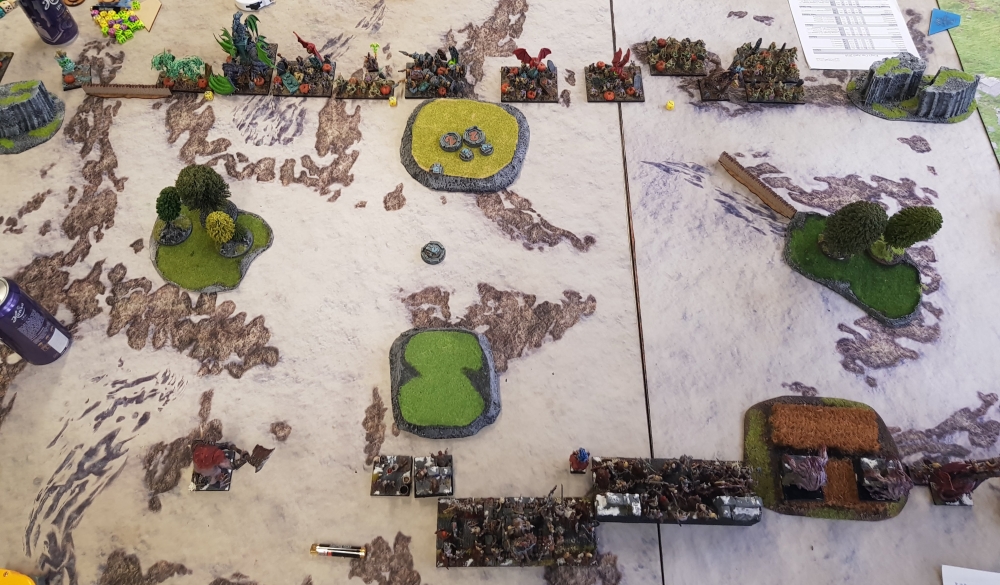 I followed my standard deployment strategy, not really caring too much about his as he just dropped down cheap drops along the entire front. His hard hitters ended up on my left flank, facing down just my troll king. His center and right flank were seriously outmatched by mine however. On the right flank, his king on wurm was the biggest threat, but he only had height 1 units to hide behind and no heal support, so he was exposed to my shooting. He did something weird with his loot token and didn´t put it on any unit. I was left behind the wall in the upper left corner. 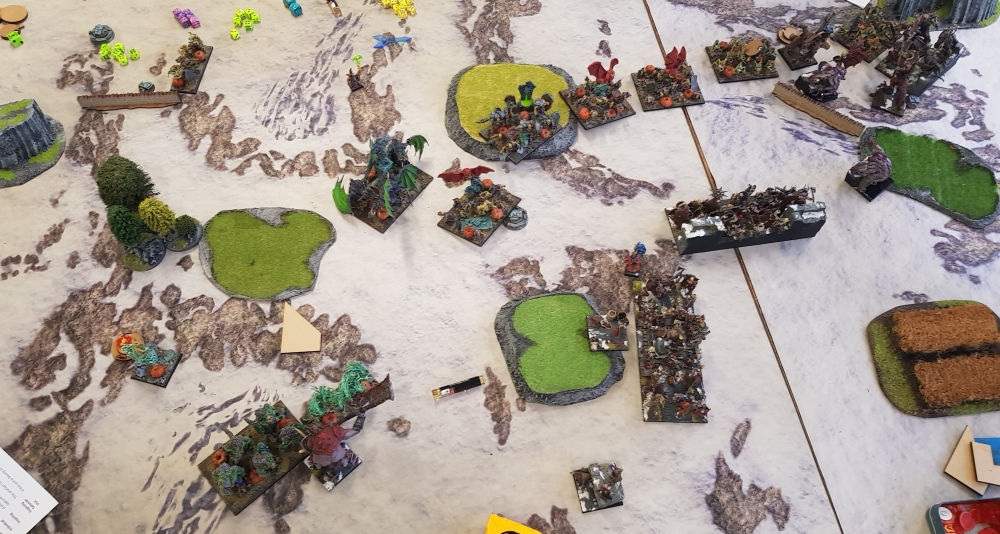 Seeing his weak right flank, I went to work, surging forward, staying just outside the wurms charge range, but threatening his chaff line. My shooting took a hefty chunk out of the king on wurm and remove a unit of ghouls. My opponent´s left flank moved up fast, while the center slowly tried to adjust to my right hook.

The next round, my hook connected. Magnhilde charged the king on wurm, keeping him occupied, while my devourers and cave dweller started smashing apart ghouls. One unit of bloodsworn pivoted to face his left flank, while the other trudged ahead. My troll king braced for impact.

Over the next turns, Magnhilde and the cave dweller killed off the king, while the devourers and bloodsworn wiped out more ghouls and zombies. The Troll king held his own against werewolfs and wraiths. My opponent was desperately trying to delay my flank attack while his own struggled to gain traction. My shooting managed to waiver the vampire lord twice and then taking him out, while the Troll king wiped out the wraiths before succumbing to a surge flank attack from the barrow wights.

With one loot token safely over on his table edge, Magnhilde went to kill the ghouls in the top left, who had now picked up a loot token and started the walk towards the center line. The rest of my army pushed for the center, eating the units thrown in the way turn by turn. 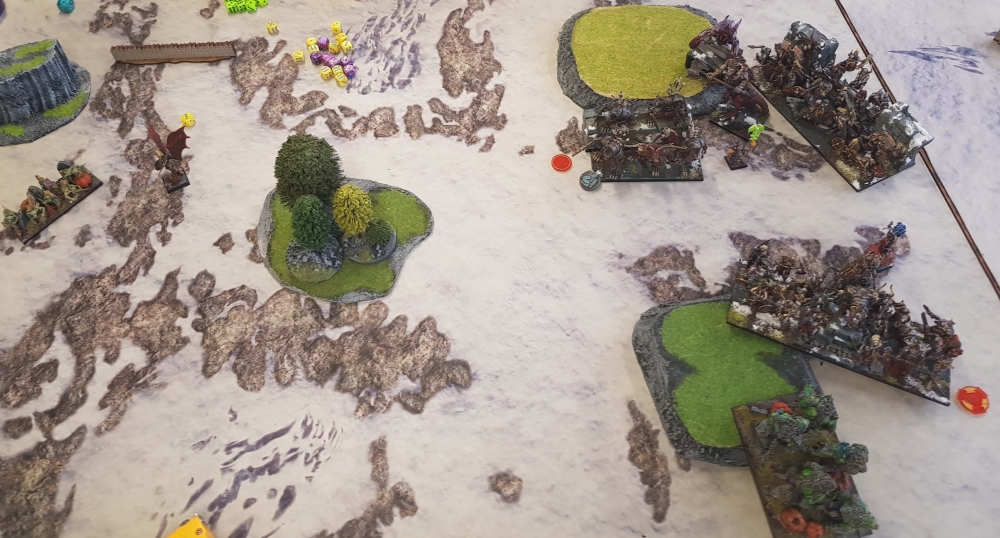 In the end, the ghouls survived a charge from Magnhilde and managed to get just across the center line with the loot token. I however was in full control of the center one as well, and everything except the werewolfs, lich king and one troop of ghouls were dead, with most of my army still on the board.

MVP: Magus conclaves. It was a close match between the Troll king and these guys for MVP in this game. The Troll king held his own for a long time, blocking the strong enemy left flank push until it was just too late. However, the magus conclaves softened up the king on wurm so he was an easy match for Magnhilde and the cave dweller, and they took the vampire on pegasus out of the game totally. This was important, as he could have easily flanked my Troll king, adding much pressure on the flank, and he has the mobility to redeploy later.

My next opponent had a very interesting ogre list, consisting of all defense 4+ units. The braves hordes are choppy enough to maul even my big hordes. If two of them can gang up against one of mine, they will probably mince it. As they have better speed, that is fairly likely to happen as well. The boomers are also not a pleasant enemy for a fairly slow army like mine.

I again went with my standard deployment, my Troll king out on the left flank, ready to stand in that crop field and breath away on anything wanting the left objective. I also planned to get my infantry and strider units into the middle forest to lock up his advance there, while the fallen and Magnhilde could swing around behind it. I realized that I had chosen the wrong side for that plan however, as the forest was closer to him. Luckily, he deployed heavy on the left and I got first turn, so my little failure of planning did not hurt me. I took the initiative and plowed ahead as fast as I could towards the wood. With only a regiment of red goblins opposing 1100pts of angry Varangur, and with all the enemy shooting on the far left, I was already feeling confident.

The red goblins on the right flank wisely withdrew, and the ogre line advanced, the boomers staying just outside my Troll king´s charge range. One unit of braves turned to face my flankers, but they took heavy damage from breath and were then routed easily. As my infantry threatened the ogres from the front, they were not able to turn to face my flankers, so the ogre heroes threw themselves in the way, slowing down the Varangur tide. On the left flank, my troll king put a bunch of wounds on one unit of boomers, but got the other group in his flank with fire oil, so he bit the dust.

He had kept the boomers busy though, so they had not done much shooting. The wounded ones were finished off by shooting, while the braves could not push through my bloodsworn in a round, and were subsequently wiped out as there were enemies coming from too many angles at once. The ogre lines were disappearing quickly, although they did manage to take out one of the devourers on the way down.

A last hail-mary charge by the boomers did take out a horde of bloodsworn, but then they found themselves in a tactical position known as FUBAR. 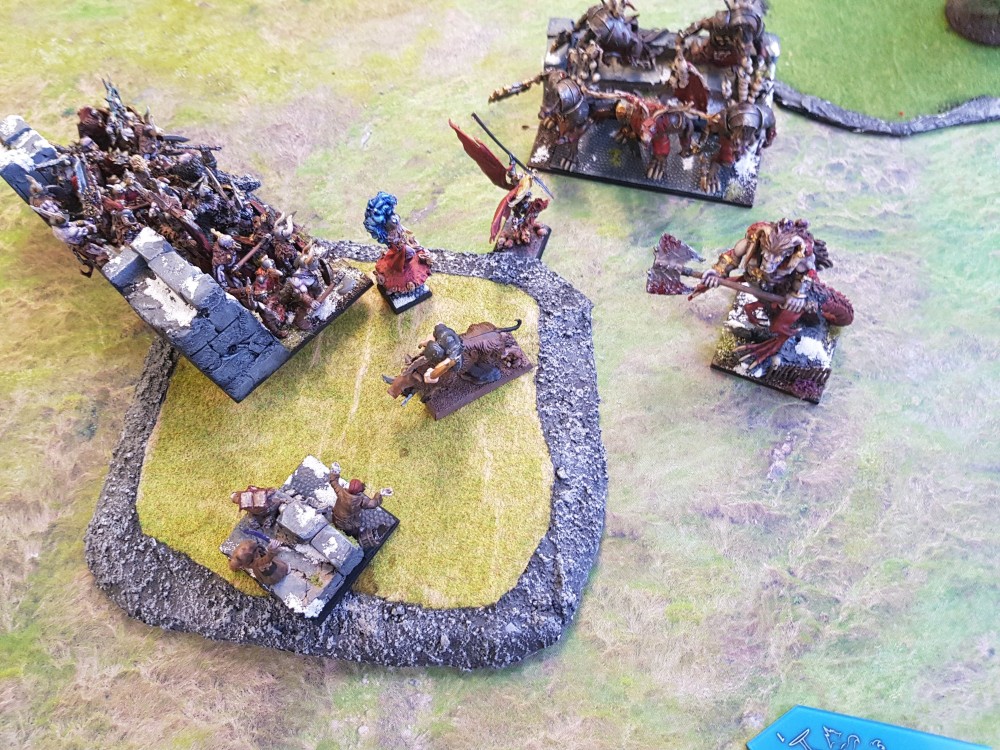 The sole survivor of the ogre army was the red goblin biggit, who survived 5 wounds of shooting, getting wavered, but keeping a slight moral victory for the ogres who avoided being tabled.

This battle was made much easier for me because of how my opponent deployed. With nothing of substance opposing my flankers, my opponent´s army was caught between a rock and a hard place already from the second turn. As there was only a single objective on the left flank, the ogre heavy left flank was in the wrong place. They had little important to shoot, and they got into the real game too late. I could in theory have stopped my army on turn 3 and I would have had the game on scenario. However, blood lust is important, so I decided to push my advantage and just kill off most of the enemy army.

MVP: Cave dweller. He killed the ogre boomer sergeant, getting himself in the way of a horde of braves. Then he survived those braves, as they were hindered, and combined with the blood sworn to kill them off. He regenerated a ton of wounds, getting into safe territory again, and then ate the last boomers just to finish it off.