With the new teleport spell, some infantry heroes have finally gotten a new lease on life. Orlaf the barbarian is certainly one of them. Where he used to be an extremely niche choice before, with teleport support, he can get where he needs to be in turn 1 and be ready to rock behind enemy lines from turn 2. As he is both fun to play with, a good tactical tool and a heroic single model that I can do cool modelling stuff with, I decided I needed an Orlaf for both my Kislev and my Norscans. 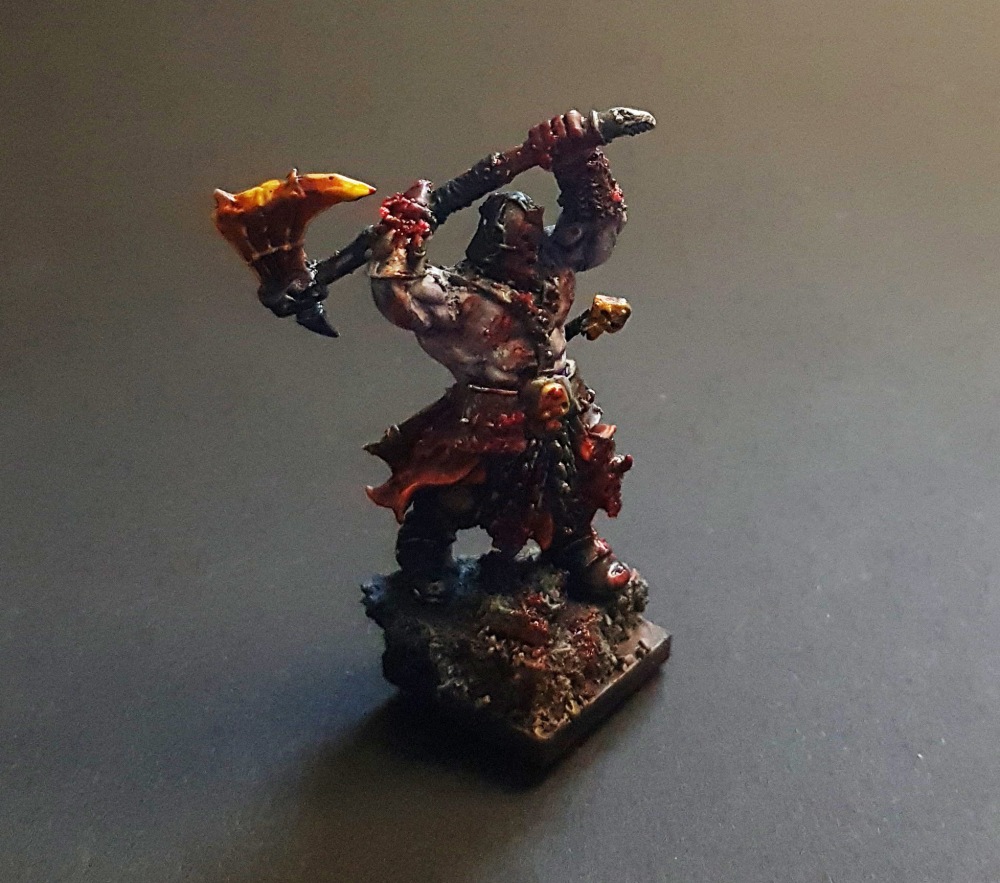 Karl Reiner Vollen was once a medium cavalryman of the empire, captured by the chaos forces in a disasterous battle in Kislev. As he had fought bravely, a warband leader decided to grant him the gift of becoming a gladiator. Reluctantly, Karl was forced to battle his former comrades for the entertainment of the Norsemen. As he was dragged along the victorious hordes into his old homelands of the Empire, he killed more and more of his former landsmen, with less and less reluctance. As he saw how strong and powerful the men of chaos were, he understood that their Gods were the real Gods of this world.

A shaman of the northern tribes saw the presence of Tzaar in Karl. Gifting him with a massive deamonic axe of Tzaar, and inscribing runes of power into his flesh, he helped turn the weak Karl Reiner Vollen into something much more powerful.

From out of the fighting pits of the Norse emerged the powerful Azytzeen, chosen of Tzaar. Growing in power and stature for each kill dedicated to his new patreon, Azytzeen led the charge against his former countrymen, winning greater honour with each battle. Seeing the gifts of Tzaar in his massive stature, the men started to look to him for leadership, and Azytzeen challenged his former master, the Jarl, or Zar of the warband. Wielding his massive deamon-axe, and with the power of Tzaar running in his veins, Azytzeen killed his former master, taking over leadership of the warband.

Karl Reiner Voller is no more – now he is so much more, he is Azytzeen, Norscan Zar and chosen of Tzaar. 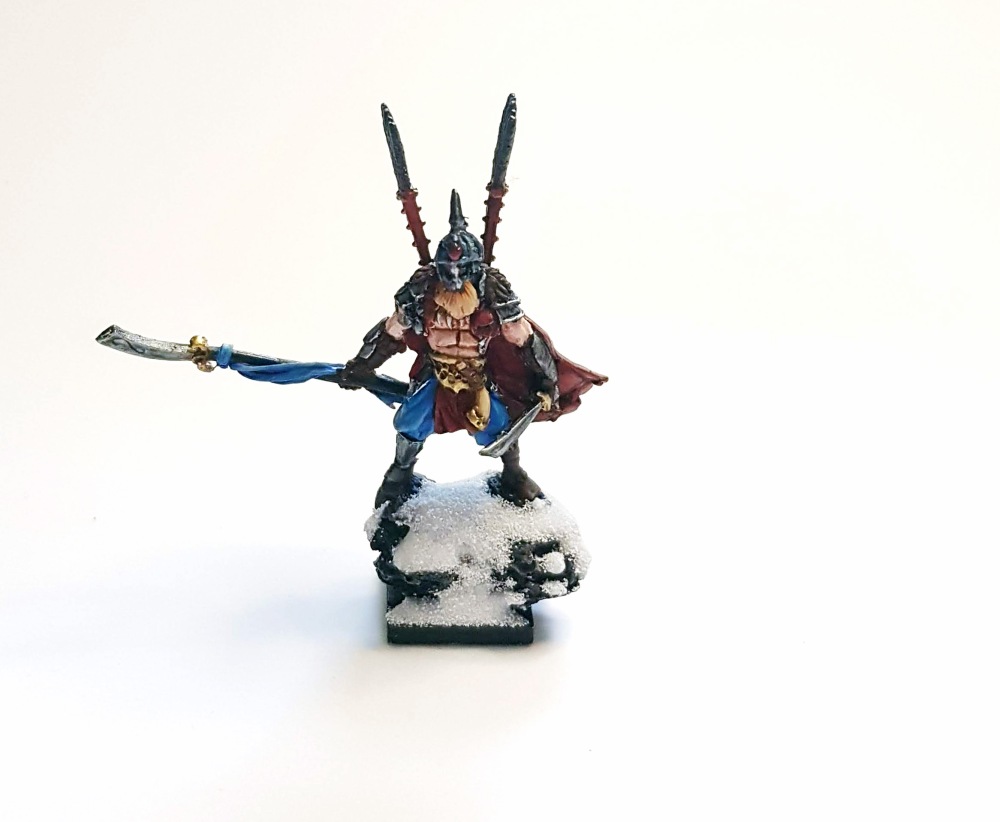 Sasha Kajetan is the current undisputed Droyaska – blade master, of Kislev and a commander in the Gryphon Legion. He resides in the Frozen Palace in Kislev, a part of Tzarina Katarin´s honour guard.

Sasha was once the heir of a Boyar commanding lands to the north of Kislev, where the river Tobol merges. His father was mysteriously murdered however, and the lands were lost to scheming boyarin. Sasha´s mother was murdered before his eyes, and it was just barely that he managed to escape the killers himself.

With his entire world in ruins, Sasha journeyed north to Praag and crossed the Worlds Edge Mountains over the high pass along the Road of Skulls. He moved ever onward till he reached the fabled lands of the east, driven by a need to see things no Kislevite could claim to have seen. Here, he learned the ways of war from the hidden lords of the islands, channeling every aspect of his being into becoming a master of blades. In Kislev, the word Droyaska means ‘blade master’, but on the islands, he had transcended such a state, and entered a realm of skill going beyond such a poor description.

Envious voices question how a mere human can hold such skill with the blade. Some point to his eyes, pure violet, as a sign that something is not right with Sasha Kajetan. However, his valour in battle is beyond all doubt, countless men and beasts of chaos have fallen to his blades, so his enemy find little ground for their rumours as both the common men and highborn look up to their hero.

Both characters are based on very central characters from Warhammer novels. Sasha is from the Ambassador series, where he is both a hero and a horrible villain. He is an unnaturally good swordsman, in a smaller battle, he takes down around ten chaos knights by himself, and it is all done shirtless like Putin. There turns out to be some darker reasons for his swordsmanship, maybe he is the chosen of someone?

Azytzeen is from “Riders of the dead”, where two empire citizens end up on very different paths from their common beginning. One ends up with the Kislevites while poor Karl is captured by the marauders and ends up as the chosen of the God of change.

Both are men that end up on dark paths, both end up seeking death, and both can kill unnatural amounts of enemies, just like Orlaf can.

Azytzeen is a Avatars of War miniature, while Sasha is a heavily converted Reaper barbarian. 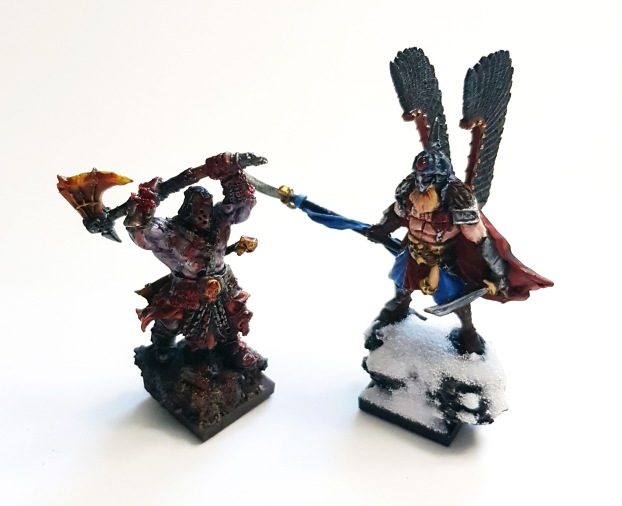 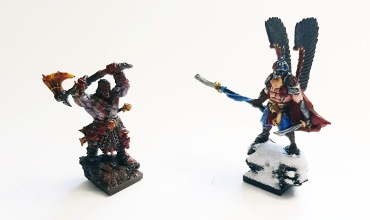 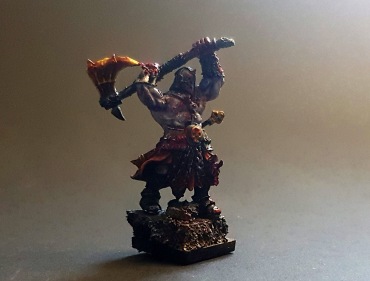 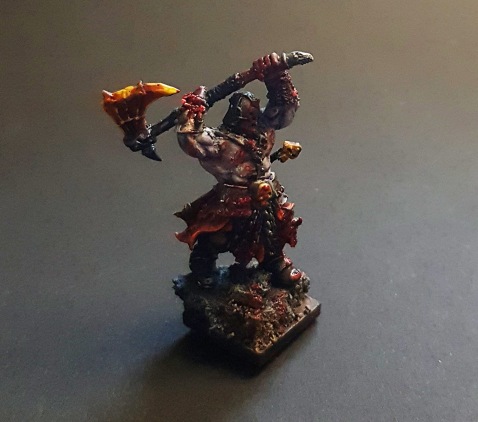