Kings of Outland was a small 1500pts Kings of War Tourney I recently played in. For my first game, I was up against the winner from the last tourney I played in.

The scenario was D3+4 objectives, which ended at 5 objectives. My opponent won the roll to place objectives, giving him an important strategic advantage as he could group his three objectives in a corner. I placed my two on the very opposite edge of the field.

My league of rhordia army was practically the same as the one I played in The Hunt for the Artifact KoW Tourney – Army List / Pre-tourney thoughts, just with 100pts shaved off. Tzarina was degraded down to a normal winged aralez and lost breath, and the Boyar was swapped for a Sorceress.

My first thought was that this looked very annoying to fight. Three punchy, fast and extremely resilient characters. Then a regenerating hard hitting revenant horde backed by mummies. No chaff, but the individuals can do chaff duty and more. With such high speed, defense and nerve, they can easily mess up my TC based army. The army list coupled with the fact that my opponent got to place 3 of the 5 objectives in a cluster on one flank made it feel like an uphill struggle. My list has practically no way to stop the insane individuals in this list.

I improvised a plan that in hindsight was not very good. I was thinking that I had to fight over the clustered three objectives to have any chance of winning, two of which were close to his side. To be able to fight on the bottom, I would need my entire army to have a chance, so I could not put two units out of the fight to hold the two objectives at the top. I kept one unit there so I had some leverage, and planned to turn back with some Ungols depending on how things were going. This plan was not very good because it forced less than all of my force to fight all of his on a very limited frontage with little room for flanking. I move up in turn 1, threatening a flanking maneuver and pushing into threat range with my bottom flank.

As Ilona didn´t look like she was so fast, I managed to get my Ungols charged by her in turn 1. Luckily, the hindered charge actually didn´t kill the Ungols. It did put pressure on me though, as I started to realize just how badass the little lady was. 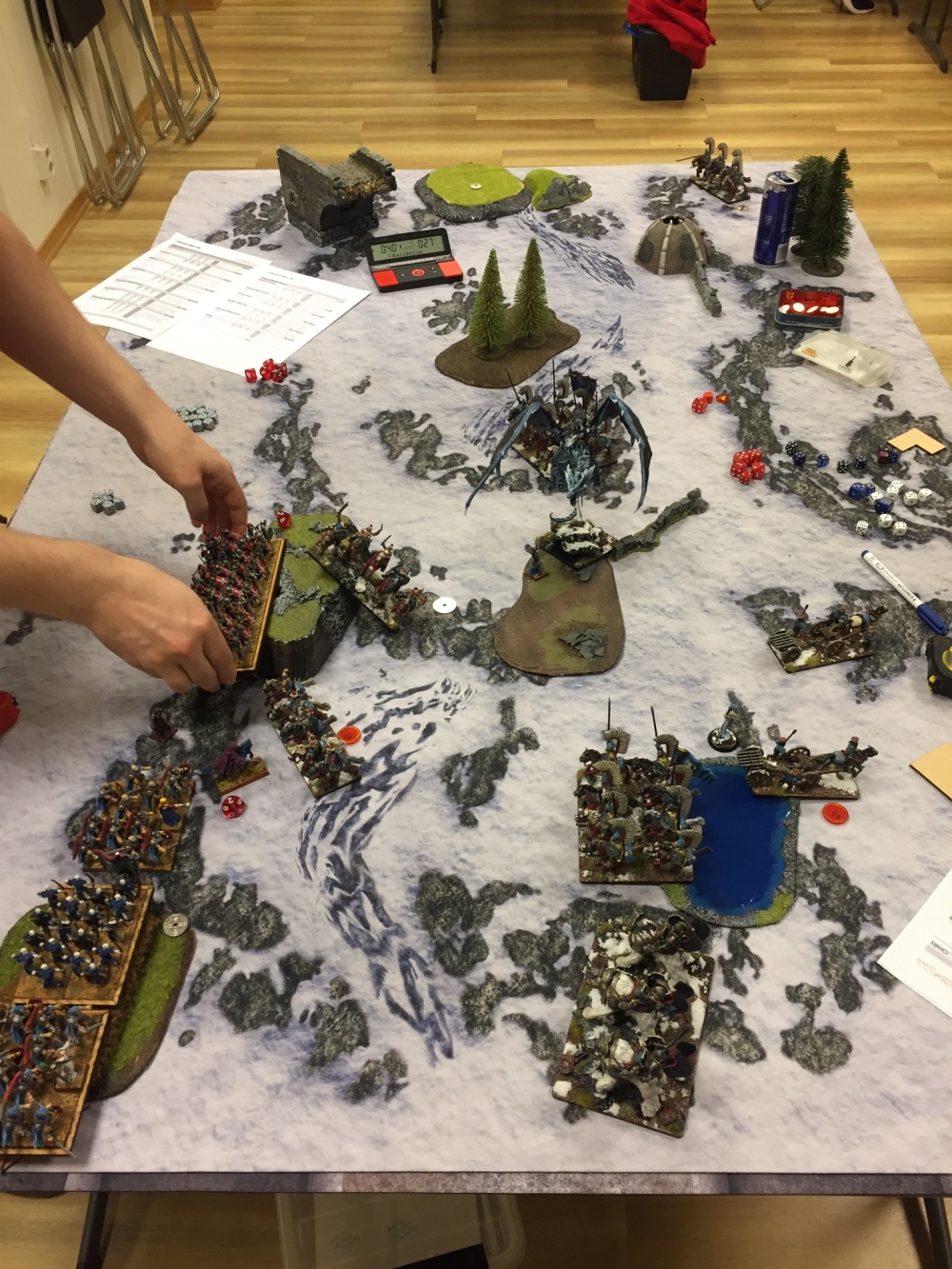 Turn 2, I try to block the revenant king from charging my bears by charging him with Ungols. If successful, my Sons would get to murderize some mummies next turn. The other Ungols go to block the revenants. I am not actually sure why when I look at the image. Maybe Tzarina was in range of them with a shortish surge.

Tzarina try to attack Ilona, but hindered, with only 5 attacks and an additional -1 from Ilona´s special rules, I can´t touch the stupid vampire thing. 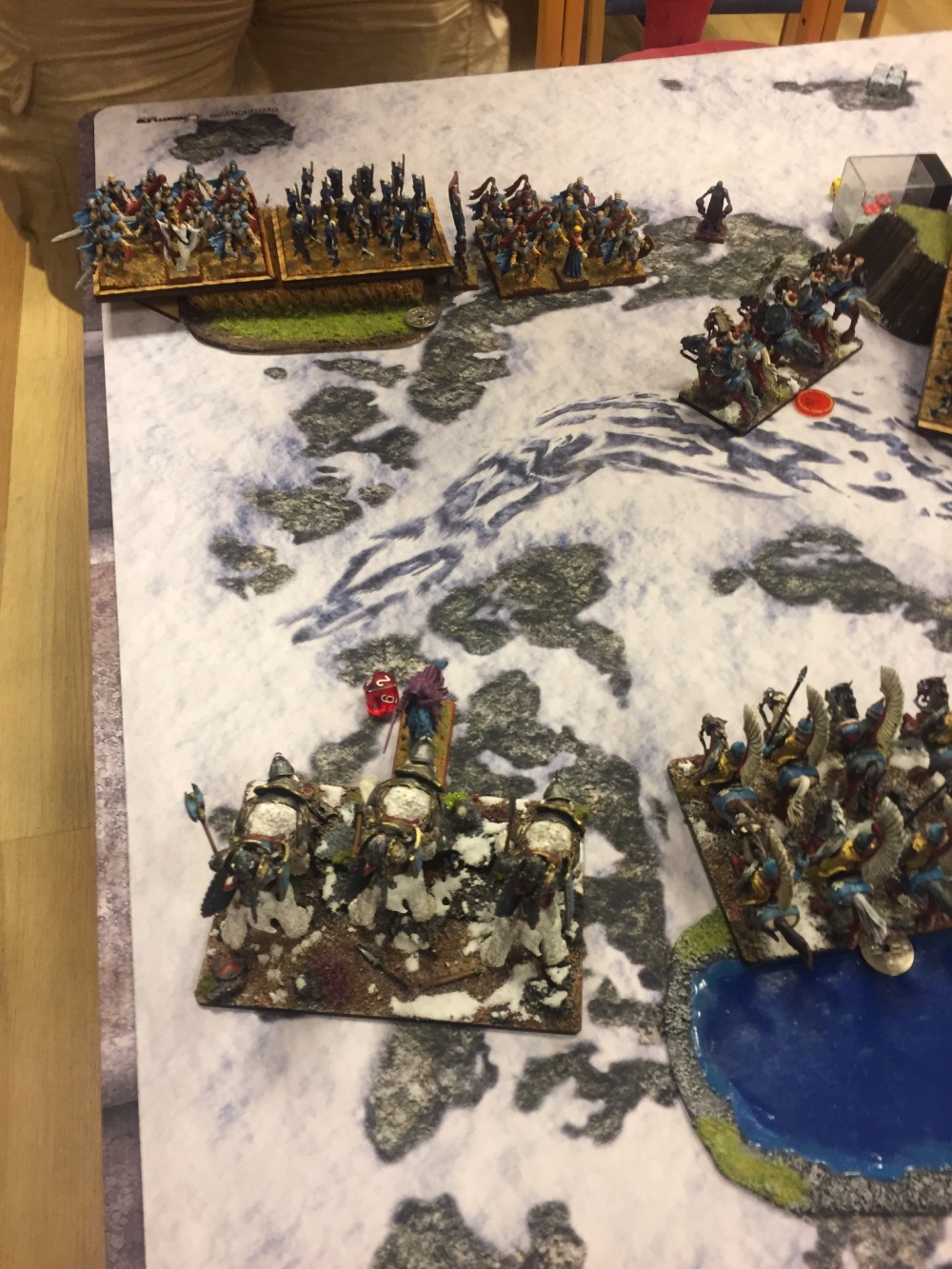 Unfortunately, the slippery Revenant King managed to pass by the Ungols and charge the Sons, holding them up. 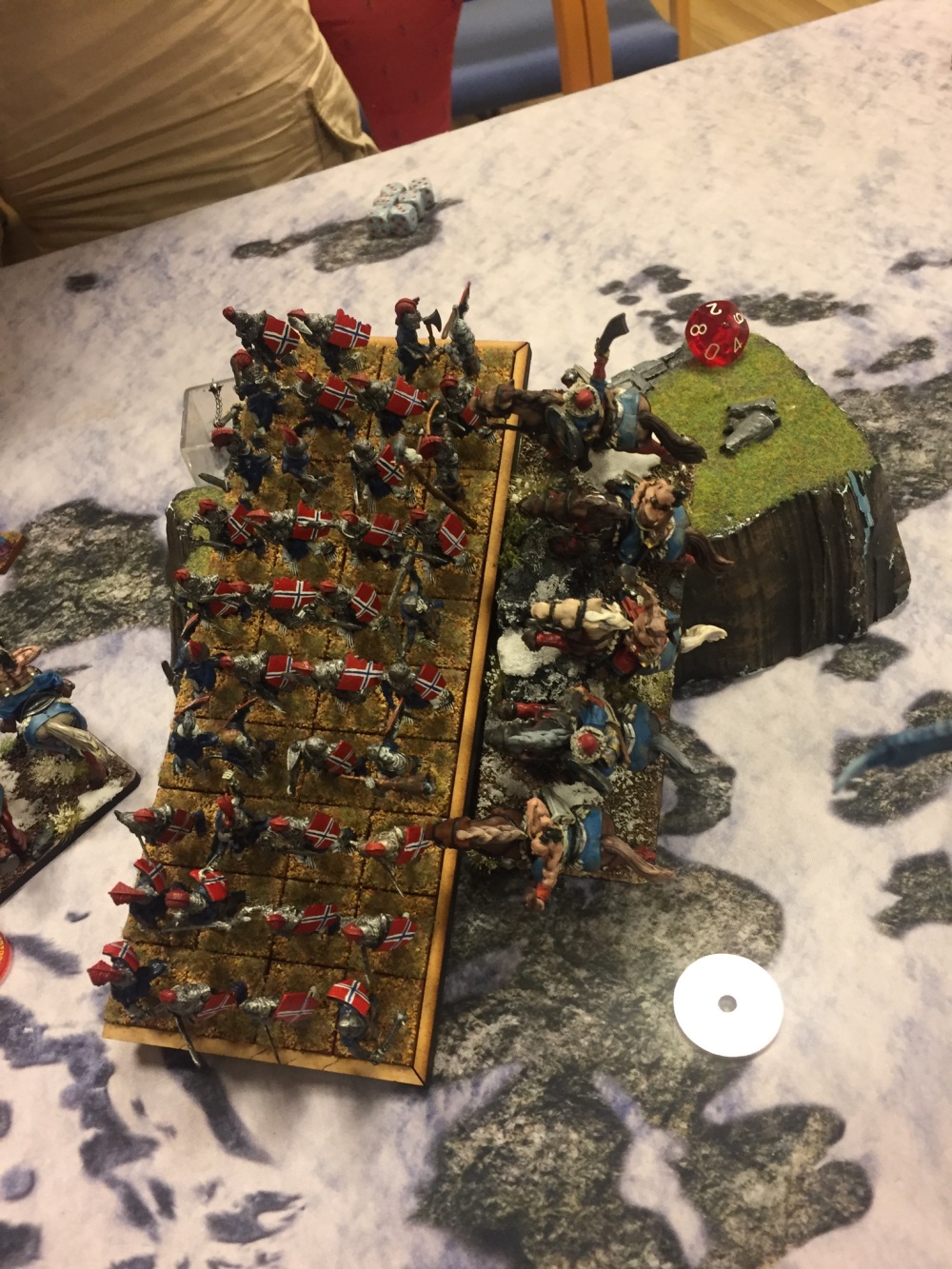 The Ungols were predictably murderized by the Revenants, although the other Ungols actually managed to keep it together against the mummies on a double one. 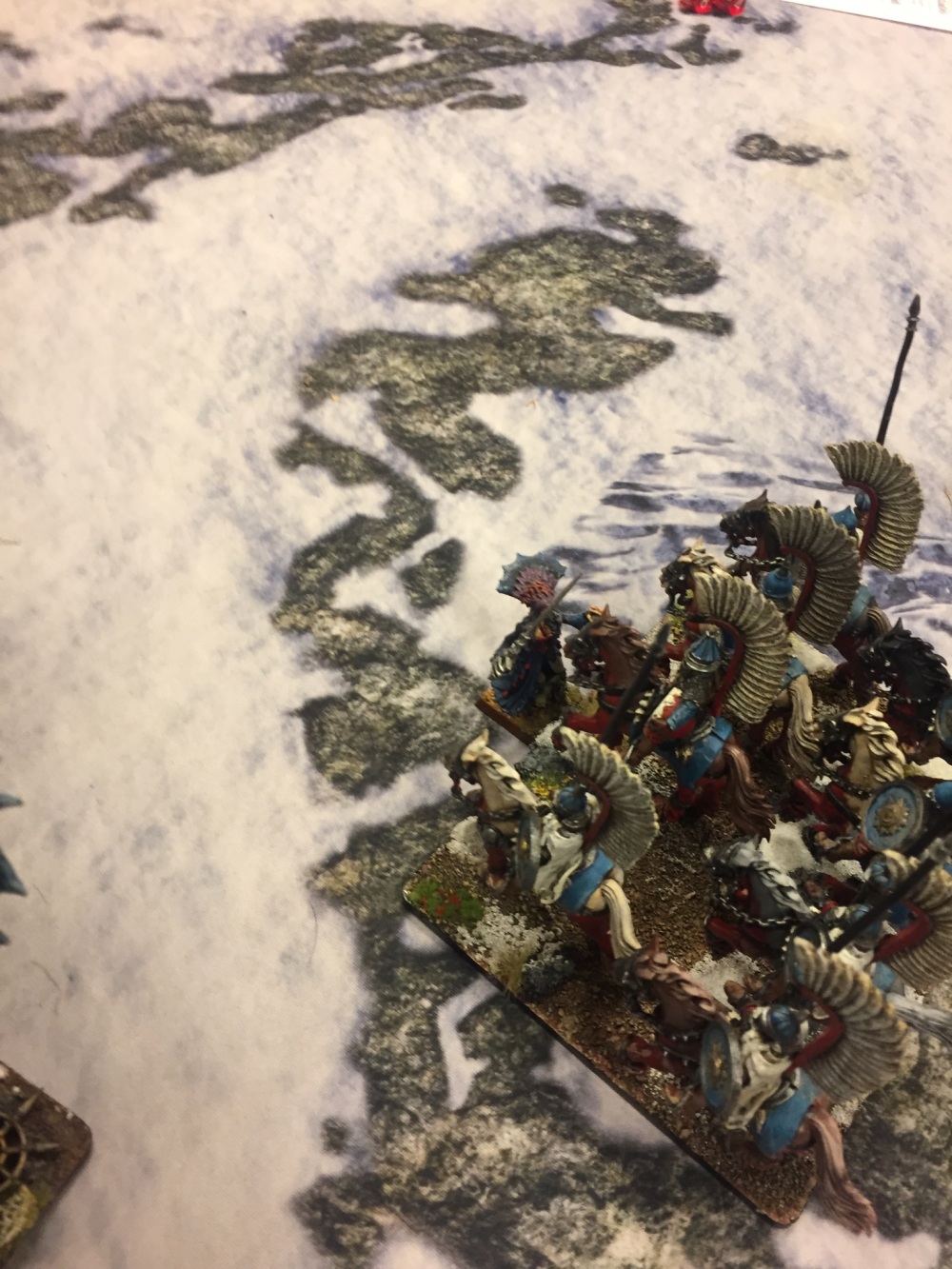 The OP lady Ilona decided to go play with a regiment of lancers, taking them out of the game by slapping them silly the next three rounds. At least they kept her busy for a while 😛 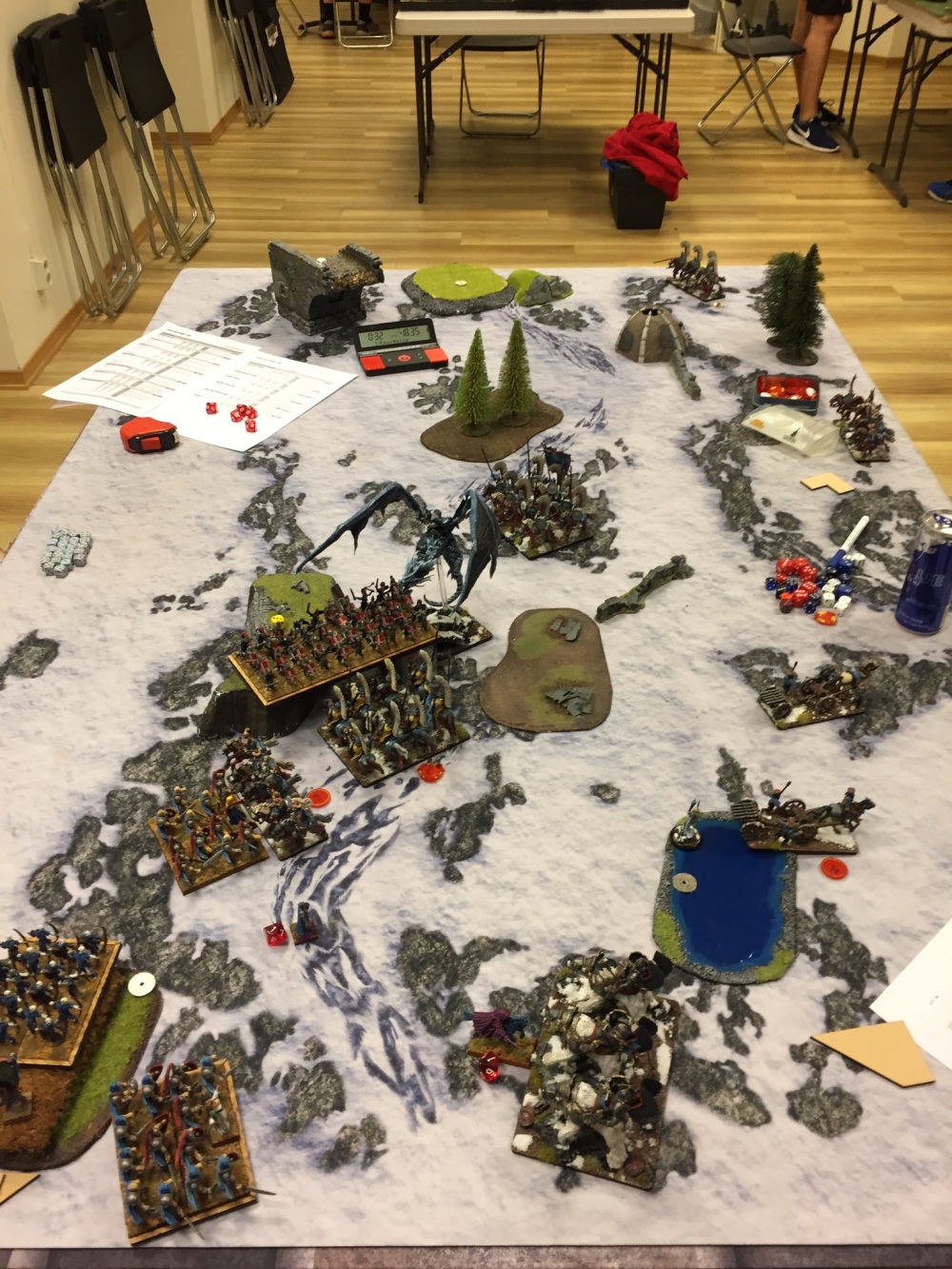 With two of my heavy hitters tied up by stupid individuals, I feel pressured to take a longshot charge against the revenants. I have a flank with Tzarina, and I can get one unit of lancers in. The Sons have to charge the revenant king, who they kill, and then they get to stand there and wait for the mummies to charge them. My shooting is useless because he simply regenerates or heals the plinking damage, and the characters are too hard to hit and have too much defense and nerve. 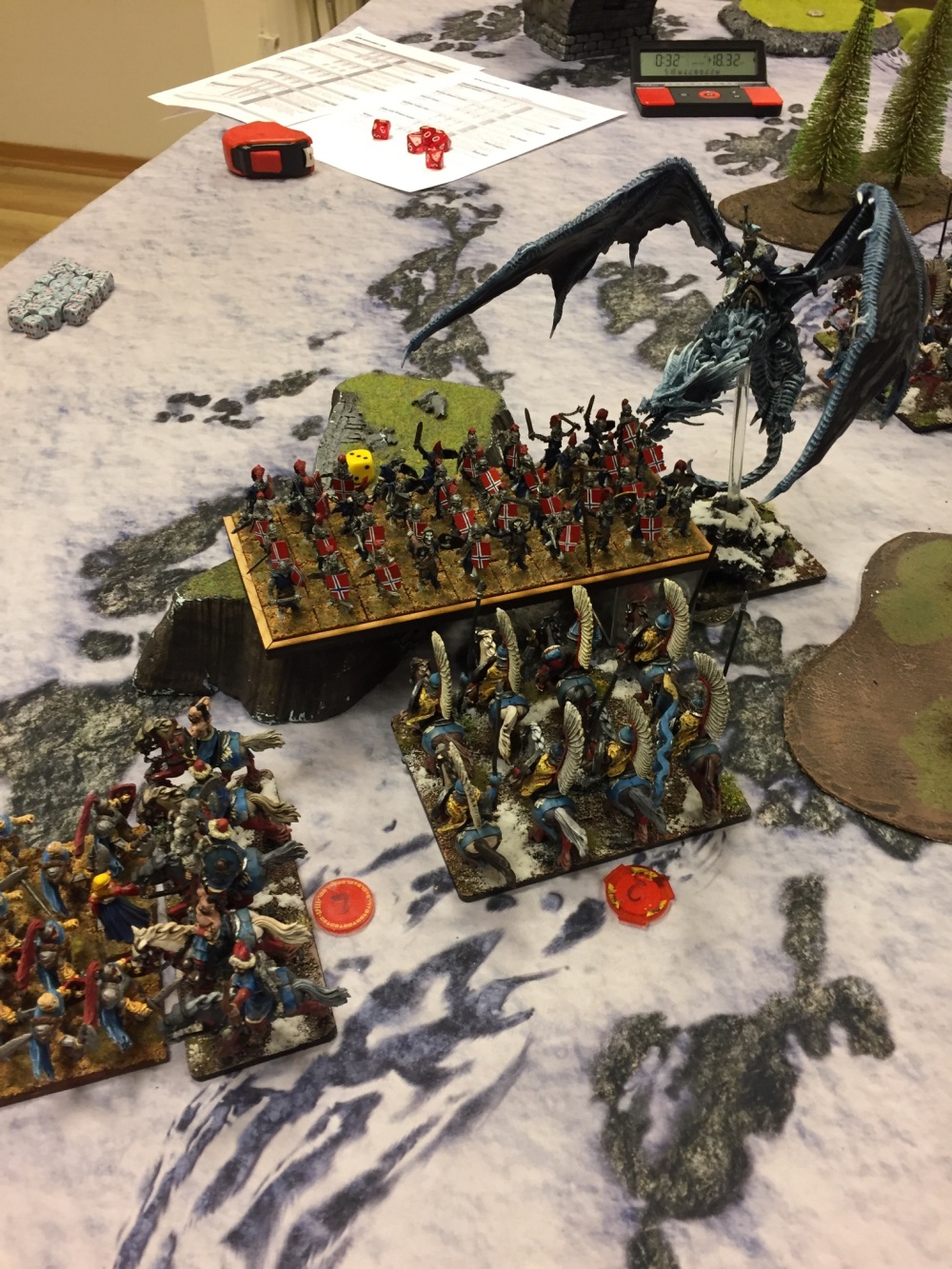 Unfortunately, but expectedly, the charge against the revenant horde failed. I really felt the loss of attacks from the downgrade to normal winged aralez here. I knew this was my last realistic chance of victory in this game slipping through my hands.

Undead turn 3, he regenerates like 10 damage on the revenants, really just pounding in that it is all over. The Sons get charged by mummies, the ungols finally are disposed off, and the revenants start taking out the lancers. From here, it is just a slow downward spiral of less and less exciting charges, lots of regeneration and healing taking away the few chances I had of killing any more points. The mummies fighting the bears almost died, but I rolled poorly, and they regenerated very well, so they won in the end. While my opponent was a nice guy that was good to play against, the list was just as frustrating to play against as it looked on paper. Individuals with this much power and resilience are just so frustratingly mobile and dominating in a rank and flank game, and at 1500pts, there is even less that are able to handle the bastards. I don´t think vampires need to be THAT amazing. 8 attacks with CS3, Speed 8, defense 6+, 14/16 nerve and -1 to hit from heroes is just insane. A good player would practically never get either Lady Ilona or Mhorgoth killed. I was actually the player that took out the most! points of this list in the tourney. Needless to say, my opponent won the tourney.

Overall, a game I knew I had little chance of winning as I was playing a better player with a list my list couldn´t really handle in a scenario that was tilted to fit his plans. It wasn´t just these factors that lead to defeat though, it was also the poor plan, which left me fighting a loosing battle from turn 1.

If I was to play this game again with the power of hindsight, I would have started my deployment heavy on the bottom flank where the three objectives were. I would start with Sons, lancer troop, sorceress and both cannons there. Then pathfinder lancers behind the wood, then remaining lancers and Tzarina in the middle, with Ungols on the top. Since I had more drops, I could probably keep his army tight in the corner, allowing the Ungols to stay fairly safe in the corner, especially since the middle would have a decent force to intercept anyone going for the Ungols. The gameplan would then be to keep the objective that was in my corner (under the bears). Since he would have to hold his two objectives, I would be fighting a much more even force, and I would get to shoot more and maneuver more. I would still be out-listed, but it feels like a much more winnable scenario than the one I engaged in here.