For my second round, I got to meet undead again, but a much less extreme list than the last. My opponent was new to Kings of War, having played about the same amount of games as I have.

Scenario was Scavenge, were you can pick up loot tokens with a unit that holds the objective.

A very elite undead army. The soul reavers hit like a ton of bricks, the zombie legion will take a charge like champs, and with 40 attacks, they are actually a threat offensively as well. Werewolfs outrange my army and are nimble, which is an annoying combo. Except for the werewolfs and reaver cav, the rest of the list is fairly slow, so I should get to control charges in some parts of the field.

He loads up the bottom flank very heavily with wolves, vampire and all soul reavers. The zombie legion goes in the middle and the ghouls “hold” the top flank. I setup ungols + tzarina to easily wipe out the ghouls. That will give me that flank in 1-2 turns. Tzarina can then turn in towards the center to help the majority of my army with crushing the zombies. On the bottom flank, I will try to delay him with inferior forces, hopefully baiting out one of his hard hitters in the process. I misplaced my Urugan cannons. Since he had no shooting, I should not have cared about cover. With his few units, I could have used them to bait some of his units into bad positions, for example by placing one in the bottom corner of my deployment. 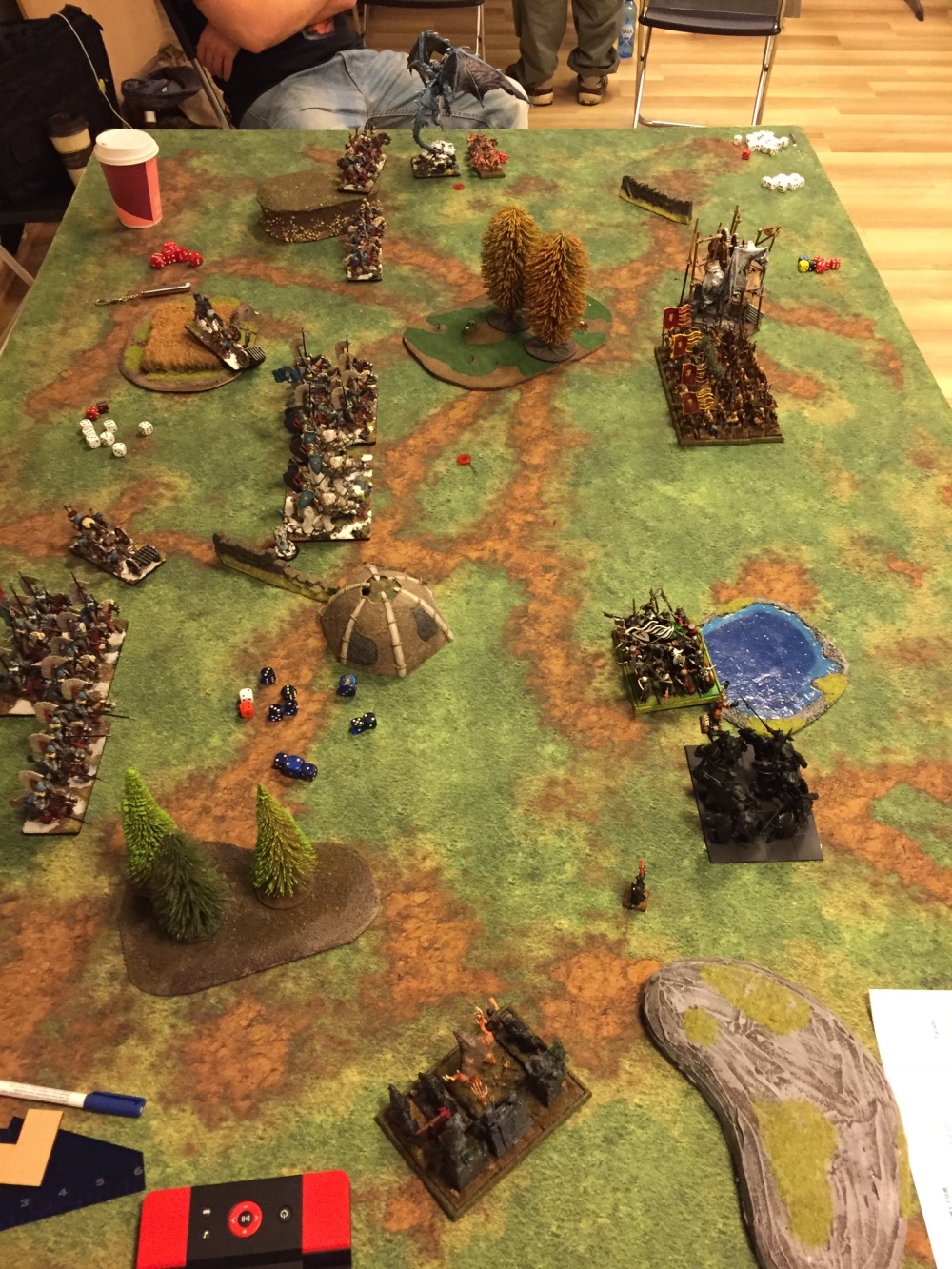 My opponent gets first turn and takes it. I am surprised that his zombie legion barely inches forward. The ghouls go aggressively forwards, hoping to catch the ungols before they are pin cushions. The bottom flank moves forwards cautiously, wolves moving into postion to flank my lancers through the woods.

I hold my bottom flank back, moving them defensively in towards the middle. I need to get some shots in to soften the incoming units. The center moves up to threaten a wide area, and the top flank start erradicating ghouls. The ungols easily wipe out one unit, but Tzarina actually bounces off the second.

Turn 2, he moves the werewolfs into a threatening position in the woods. The foot Soul reavers wander into range of the sons of ursun, with the lich protecting their flank from the lancer troop. I think he was being too defensive with the zombies, they would cop charges anyway, so why not get them towards the centerline where it would be easier to back them up with the flanking force and where they could contest the objective?

Ungols easily dispatch the remaining ghouls while Tzarina gets in position to flank zombies.

With a couple of bounced charges, I get some pain in return in turn 3. My bottom flank is erradicated by werewolfs and soul reaver cav. The vampire has also snuck around my line and starts taking out the badly placed artillery. The lich that I didn´t manage to kill goes to block my sons of ursun from charging the soul reavers. Damn individuals can be annoying.

I keep grinding against the zombies, wearing them down rapidly when Tzarina arrives in their flank. The zombies roll tons of dice against the winged lancers, but with 5+ to hit and 5+ to wound, they only do a few damage each round. The hammer of measured force or brew of sharpness + bane chant would make the zombie legion a very dangerous opponent.

I let my Ice Sorceress get horribly murdered by the soul reaver cav to keep them away from my sons of Ursun for a round.

My Sons of Ursun realize they will not be able to get away from the soul reavers and decide to just go for the “kill the lich and roll a 6 overrun” option. Unfortunately, I also don´t think things through at all and pick up the objective token. A tip – if you know your unit will die, don´t pick up the token! Of course, the lich finally dies, but I cannot get the 6″ overrun my longshot attempt needed.

Soul reaver cavalry avenges their brothers, and then also captures the token that I had stupidly picked up even though I knew I would lose my unit, “because why read the mission?” 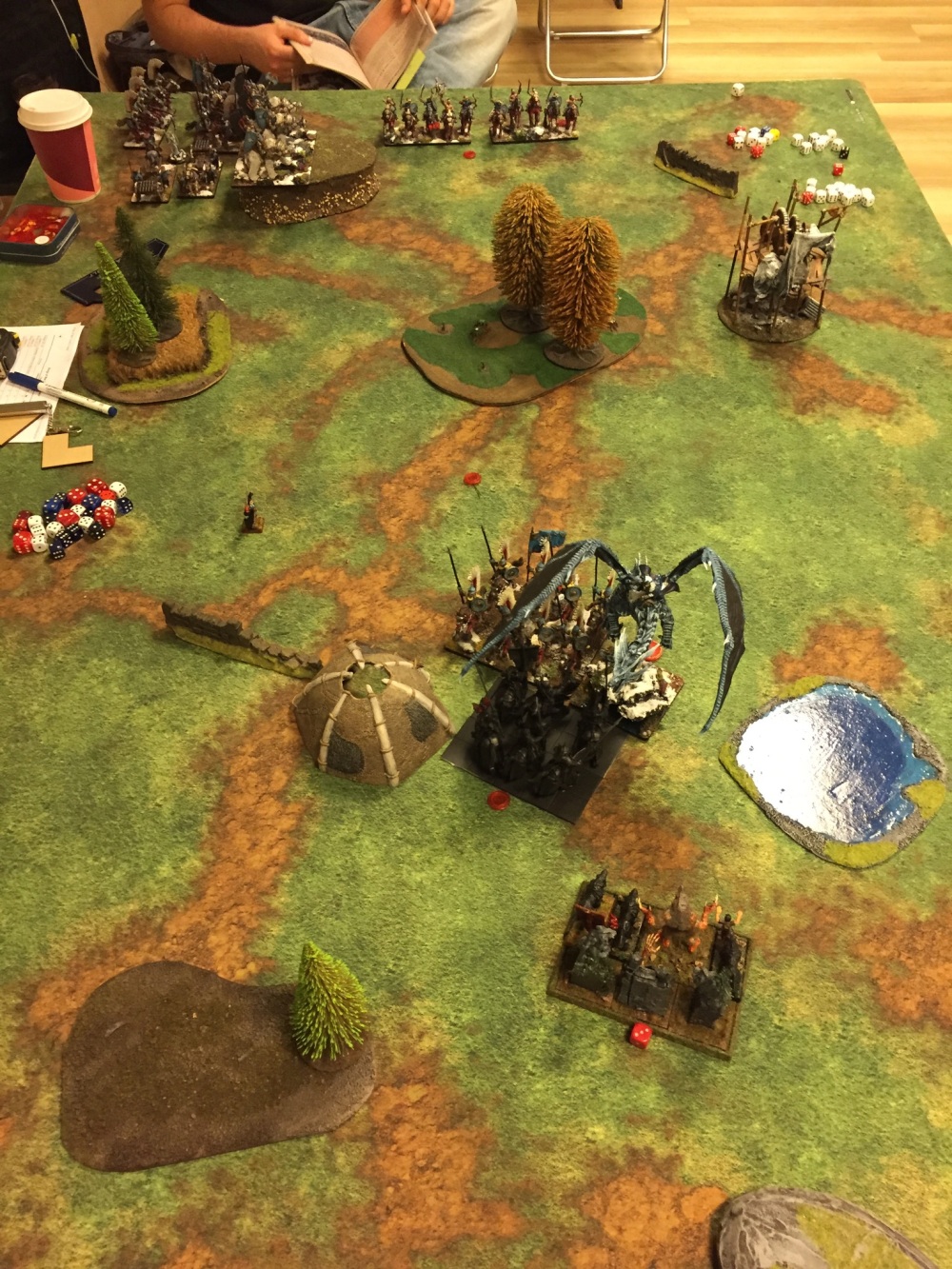 Because of my stupid mistake, it is now 2-2 and the undead have a chance of drawing the game. I think I have to kill the soul reavers, however, looking at the above image, it seems I could possibly have tried to pick up the token in the middle with the Tzarina instead while the lancers kept the soul reavers busy. I went for the charge, but against the defense 6 of the soul reavers, I couldn´t make it through, and the game ended in a draw with two tokens each.

This game really highlights that you should make sure you understand and play the mission smartly. I could have easily guaranteed a win by simply keeping his few remaining units busy. Instead I gave away a draw by picking up a token with a unit I knew would die. With his very light top flank, I could probably have just sent lots of units up there and guaranteed a win.

It also shows that my army quickly folds when I make mistakes. In this game, my Urugan cannons were placed badly and hardly got a shot off. That meant I had to fight superior forces in close combat without softening them up. My catterpillar lancers only fought in the open, while my other lancers had to charge into woods, where they of course lost against the werewolfs. It didn´t take many turns for my army to evaporate, leaving me with few options in the end.

MVP: Ungols did exactly as planned. They killed both ghoul units easily and took the objectives, then stayed safe.
Enemy MVP: Lich. He stopped the lancers cold, letting the soul reaver cav kill them. Then he kept protecting the soul reaver cav from the sons of Ursun, and in the end, he ensured the death of my Ursuns as he sacrificed himself.