The scenario was Push, where each side has three loot tokens. You get one VP for holding each loot token, and two VP for each loot token fully on the opponent´s table half. There is one additional loot token in the middle of the field.Kislev list:

The Ostlanders once again brought a lot of phalanx to dent the impact of my heavy cavalry. The list out-shoots mine, but it is much slower, and while it has much more staying power, it also has much less heavy hitting. This time, I also don´t have to contend with the annoying war altar boosting up all the troop sized units to regiment sized nerve values. 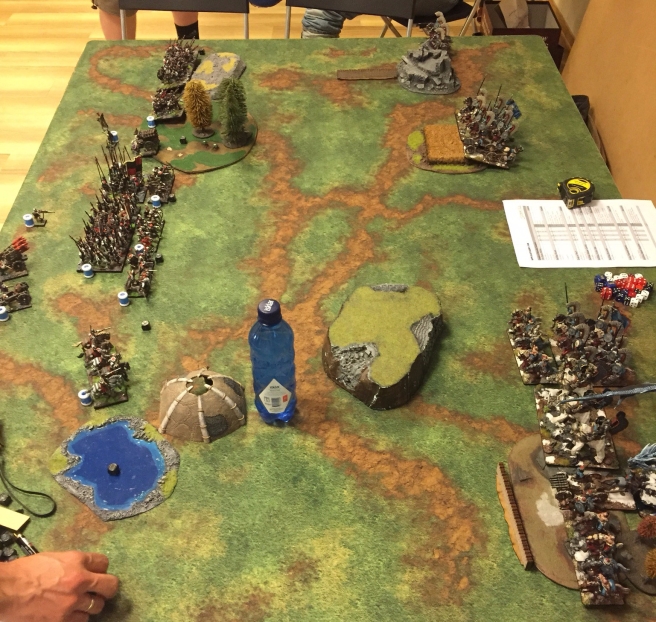 The Ostlanders deployed anchored on one flank, so I went for a heavy presence on the other flank. My plan was to march the Ungols with the loot across the field at the bottom flank, covered by the bulk of my army, and then swing in on his flank. The top flank would try to delay his loot carriers until the rest of my army could swing in to help. Preferably keeping the enemy loot on their side of the field. No matter if the top succeeded or not, I would probably also get the middle token, so I felt that based on deployment, scenario looked very good for me. 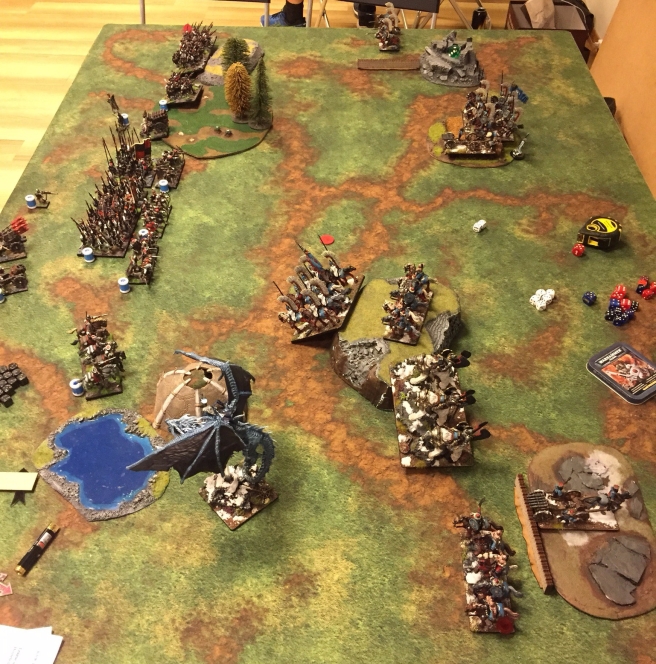 As I didn´t have a lot of cover in the middle, I pushed up hard, getting in range to charge on turn 2. Tzarina flew 20″ into a position to start taking out the artillery park or threaten flanks if the infantry moved forward. My ungols managed to waiver one of the siege artillery.

On the top flank, I moved my volley gun forwards a bit so I could reach his volley gun and his infantry. Probably not a mastermind move, as he would get the first round of fire, and thus statistically win the exchange. If I could get lucky and take out his hellblaster though, I would gain a lot more freedom to move on the top flank. 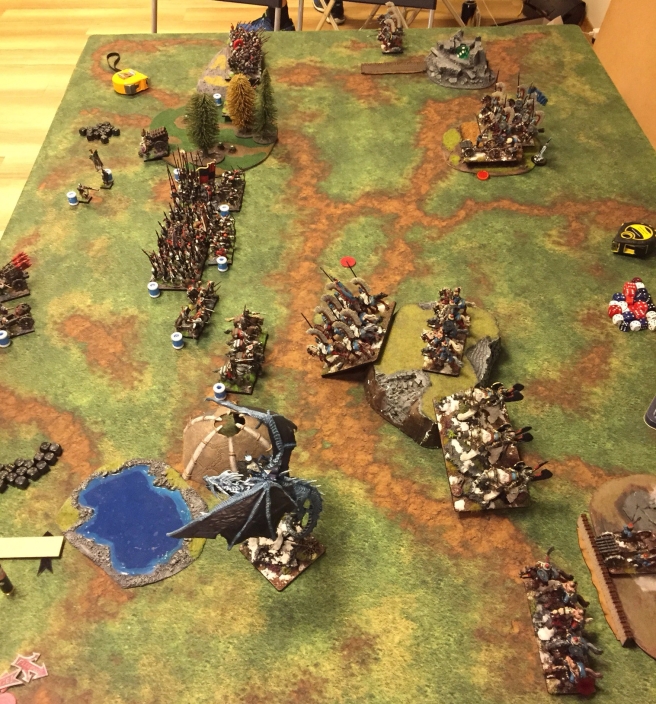 The Ostlanders responded by pushing up the pistoliers to block my advance a bit. Their shooting was punishing, wavering my top volley gun and putting 8 wounds on the center lancer regiment.

Turn 2 I continued my hard push at the bottom, as I saw that it was not sustainable to not go in as I had thrown away my second urugan cannon with the bad positioning in the woods. With the winged lancers hovering on the breaking point already, I decided to use them as counter-chaff, running down a troop of scouts, blocking up the spearman horde, so Tzarina and the Sons of Ursun could take them out the next turn.

Tzarina Katarin attacked one of the siege artillery, throwing the mortar aside. The Sons of Ursun smashed through the pistoliers. My Ungols waivered the second siege artillery, while my top flank stood in place, shaking the feathers on their backs to look extra impressive and scary to the spearmen opposing them.

Ostland turn 2. With 8 wounds on them already, a spearman horde with brew of strength was too much for my winged lancers to handle. The enemy volley gun also wiped out mine – kind of predictable really, and just another case of me playing badly with my urugan cannons this tourney. My ungols on the hill took a few wounds from other shooting, but hung around. 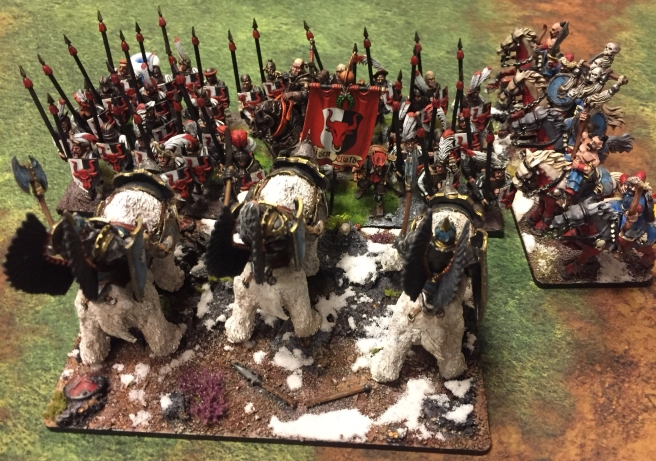 Turn 3. Wanting to exact revenge for the winged lancers, the Sons of Ursun went into the front of the spearmen horde. With crushing strength 1, the loss of TC don´t hurt them so badly against defense 4+. The Ungols had manouvered into a flanking position, and took the charge in support of the dire bears.

The three massive dire bears tore large holes in the spearwall, and with the Ungols lending a hand, crushing in on their flank, the spearmen broke and ran from the onslaught, leaving the bottom flank of the enemy army wide open.

Meanwhile, Tzarina Katarin destroyed the other siege artillery, and my top flank continued to look very scary where they were standing around. 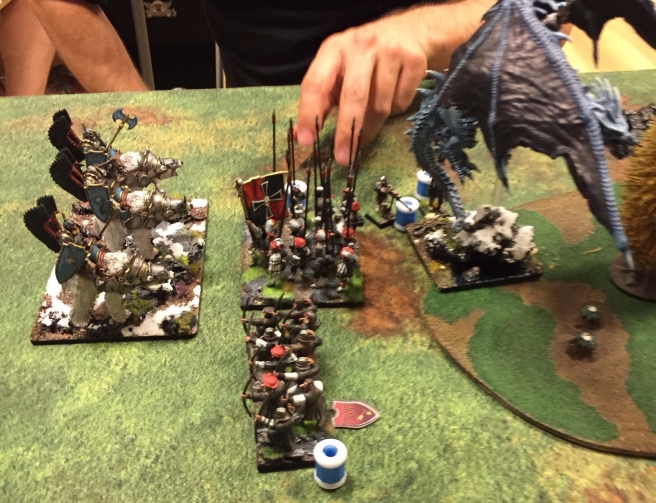 The Ostlanders could do little but turn around to face the dragon and bears behind their lines, the pikemen bracing for impact. The little shooting had no effect, with the Sons regenerating the wound they took with their iron resolve. On the top flank, the spearmen started moving forwards, sensing that their rear would soon be exposed as the army behind them started to falter.

In my turn 4. the Sons charged headlong into the pikemen regiment, while Tzarina flew over them and crushed another warmachine, the hellblaster. The pikemen managed to hold firm, stalling the monstrous bears. (I failed getting bane chant in on the sons, so with ensnare, phalanx and defense 5+, my charge was stopped) 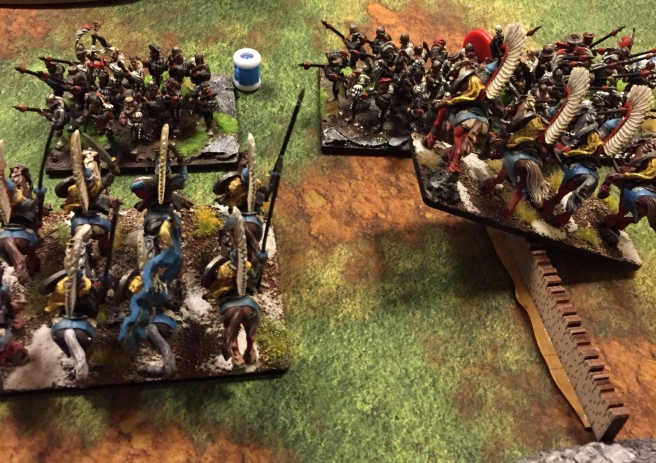 My top flank decided that now was the time to halt the enemy. The winged lancer troop charged into the horde, stalling them and getting some wounds in. The regiment charged the enemy spear regiment, but could not get through the tight wall of spears. All over the battlefield, the brave men of Ostland had held against the charge. It was too much to ask for them to also manage to push their enemies back however, as none of the counter-charges managed to take out their enemies. As the sky darkened and the sound of big wings were heard from above, the men of Ostland knew that time was not on their side.

Turn 5. Tzarina Katarin charged the spear regiment in the rear, easily ripping them apart in concert with the winged lancers. The troop of lancers put some more wounds on the spearmen horde.

The surviving Urugan cannon and ungols tried to wipe out the scouts, but only managed to waiver them. 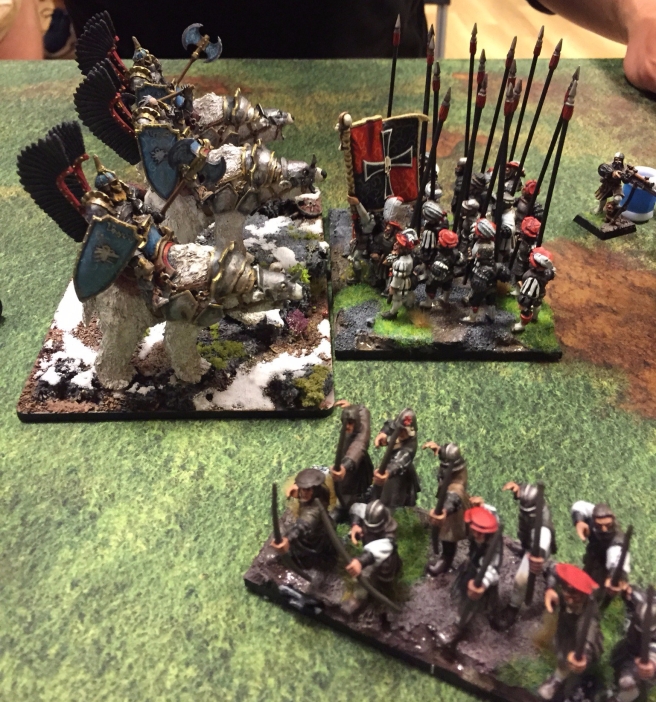 Battered and bloody, and facing the press of thousands of pounds of violent bears, the pikemen regiment lost formation and fled.

At the bottom of turn 5, the grind on the top flank continues, with the spear horde taking out the troop of lancers and readying itself for the last charge by turning to face the lancer regiment and Tzarina. The line is showing signs of the earlier combat though, the lancer troop had punched above it´s weight class against the spearmen.

Turn 6. Tired from the earlier fight with the winged lancer troop, the spearmen horde cannot hold against the lancer regiment and Tzarina hitting them in the front. In the middle of the field, the wavered scouts are murdered by a combined charge from the ungols and sons of Ursun.

The Ostland engineer takes one last shot against the ungols carrying the middle token, but cannot make the steppe horsemen flee. With that, the battle is over, all tokens controlled by Kislev.

That went eerily similar to last time, where I also punched through on one flank and just rolled up the entire army without loosing much in return. I almost lost a regiment of knights to shooting on turn 1 though, which could have made me unable to break through all the chaff in time to turn around his flank, so I had a bit of a lucky break.

I think my plan for scenario was solid. My Ungols at the bottom where untouchable, so I would get the 6 VP from them, and since I was so aggressive in the middle, the middle token was always most likely mine. If my opponent was more aggressive on the top flank, I think he could have broken through my lancers and gotten his tokens over to my table half, but then the middle token would still be an issue.’

I really misplayed my Urugan cannons once again in this battle, one only getting to shoot once after 4 turns of walking, the other going into a loosing duel. I will start to focus more on getting the Urugan cannons to work out well, as that usually really helps me control the battle. Without them,  my lancers are often forced to take on more numerous and better foes on their own, which is of course not optimal.

Kislev MVP: Sons of Ursun. Phalanx and ensnare be damned, these guys just kept mauling through the enemy army head on. By breaking the spearmen horde on the bottom flank, they opened up the soft underbelly of the enemy army, which allowed the battle to turn into a total rout.
Runner up: Tzarina Katarin took out all three enemy warmachines, pressured the enemy flanks and rear throughout the game and helped take down the spear regiment and horde at the top flank.

I ended up in third place in the mini-tourney, probably better than I deserved after the fairly bad play in the first two games. As I have said before, I think an army so reliant on TC and with no anvil units needs to be played well to do well. I have learned to think more about the mission and to have a plan for the deployment, especially of my Urugan cannons.

Thanks to all my opponents for three great games, looking forward to playing you all again 😀

One thought on “Kings of Outland – Game 3 vs League of Rhordia, Push”