Round two we were on table 2, up against a goblin + undead team. The undead army uses undead ork miniatures, so a cool team with both living and dead greenskins. My team-mate had played against the goblins the day before with his list and had a very frustrating experience with his slow list against the super-fast ranged goblin list. Hopefully the speed of my list would make it a better match.

Our lists for convenience, thought behind them available here

Our opponents fielded the following (items as usual not remembered)

The goblins bring a ton of shooting and speed, with pretty much the entire list having speed 10 with nimble and bringing a bow. The blood boil wizard can explode units that have been damaged by the large amount of shooting. When the lines clash, all the small cheap units can chaff up enemies for ages allowing the heavy hitter undead part of the list to do their thing.

The undead bring two new units from the edge of the abyss campaign, with Jarvis and the barrow wights. Jarvis is a pretty good caster, with extra range on his very good selection of spells. The barrow wights fly, although only at speed 7, and have CS3! Mummies are generally solid mainline units, able to both soak damage with their regen and 5+ defense and dish it back out with CS2. Overall, it was a dangerous combination of armies we were up against. Our opponents had clearly thought about how their armies would work together.

One thing our opponents had not planned however, was a standard deployment. While we just played out our generic deployment, adjusting a bit to account for the large amount of enemy shooting, our opponents spent a lot of time discussing every drop, using around 15 minutes on deployment. They reacted hard to my lancer drops, countering our Kislev flank with pretty much their entire army. However, that left practically nothing to oppose our Ostland flank. I guess the plan was to crush my flank and then turn in on the Ostland flank. What fools, nobody can stop Kislev! They were also intermixed a lot, with a ton of units squeezed into the center of the line. 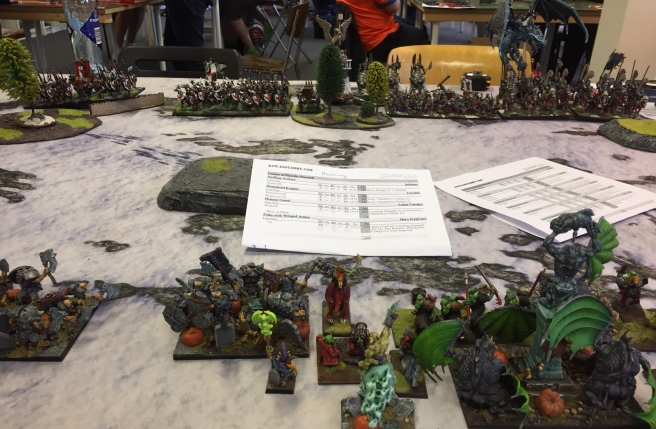 The human line viewed from the evil side of the table. 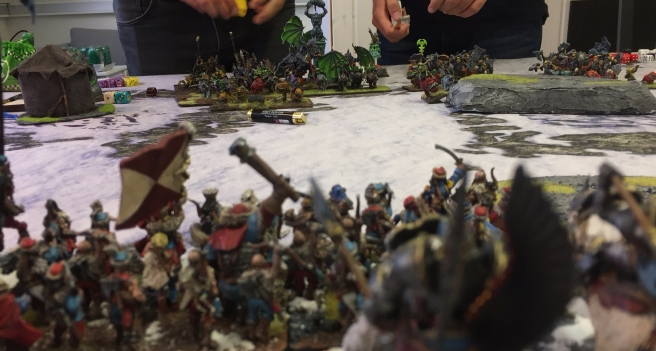 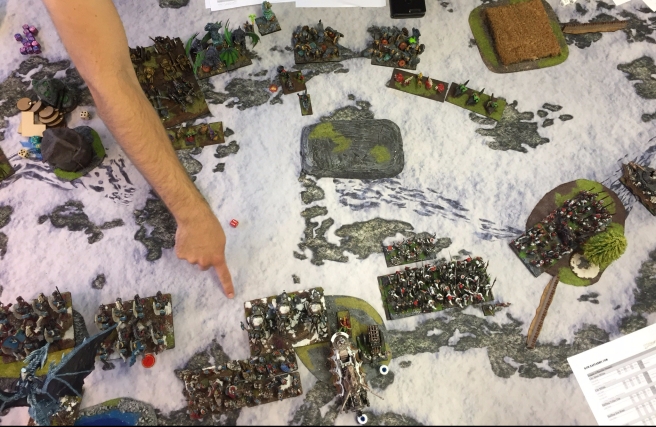 Turn 1
Winning the roll-off, our opponents took first turn and started moving up while rolling tons of dice. They tried to take out the hellblaster, but failed due to cover and the inspiring effect of the war altar. Other shooting went into one of my lancer units, putting on a few wounds.

In return, we decided that this was no time to ditter about in front of all this shooting, so my lancers and Tzarina moved up to threaten the chariots and sniff regiment. Sons of Ursun moved forward as well, not wanting to be stuck behind the archers. The Ostland line moved forwards fast as they could, sensing that they would be handled piecemeal if they did not move up in support of the Kislev line. Our shooting was pretty terribad, but I believe we took out one sniff troop at least with the hellblaster.

Turn 2
The undead part of the list was not really in a position to start dealing serious damage, so the goblins went into chaff mode. The chariot horde charged the lancer regiment I had placed in front of them, putting on some damage, but not being close to breaking through. The sniff regiment stopped 1″ in front of my other lancers, while two troops blocked up in the middle. The goblin king charged our hellblaster and took it out. Their shooting did little, just adding a few scattered wounds here and there.

We had about a million options for charging, although a lot of them were bad. In the end, the lancers charged by the chariots counter-charged, and Tzarina joined them. The other lancers, unhurt and with TC, charged the sniff regiment. The Sons decided not to charge anything, as they would block the kossars from shooting, and I thought the barrow wights were werewolfs and would be in range to charge me if I charged the sniffs in front of me. (I have played against this undead list before, and then that unit was a werewolf unit). The ostland units continued moving up as fast as they could (so not very fast).

The chariot horde and the sniff regiment were both killed, cleaning up that flank neatly and removing a lot of shooting. The kossars failed again, not putting a single wound on the sniff troop. It should be said that I played the kossars with 18 shots instead of 20 until the middle of the last game, so I missed some opportunities for getting hits, but this was still bad.

Turn 3
Things were starting to heat up seriously now that the undead lines were in range of ours. A mummie regiment was surge into the halberdier horde, bouncing, but putting on a good number of wounds. The vampire joined the goblin king in taking out the war altar. The goblins focused on my wounded lancers, unfortunately wavering the regiment with combination of bows and blood boil. That was bad, as the regiment would have been able to charge the barrow wights. That would have been a great trade, getting a TC2 charge in on the wights with my badly hurt lancers.  The small unit of halberdiers took some shooting, but stuck around. 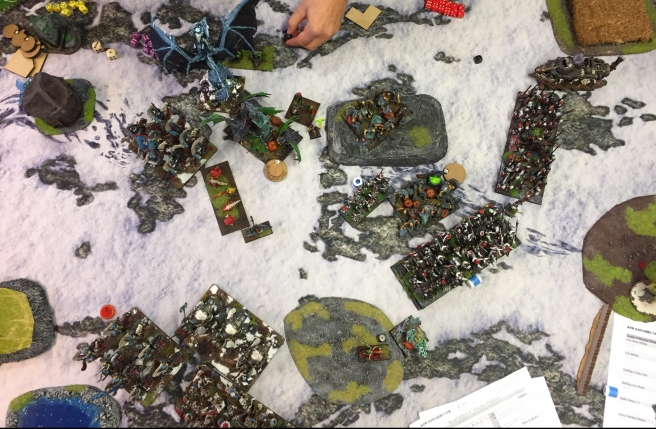 Since I could no longer charge with the lancers I wanted to trade, the unhurt ones went in instead, putting a good chunk of wounds on the wights. Tzarina found a unit of sniffs to charge, but totally failed in putting on the hurt. Not trusting my kossars for a third round of shooting, the bears ate the arrow-dodging sniff troop in front of them. Dodge that you bastards! The kossars shot at the goblin king in cover, and of course actually managed to hit him in contrast to the sniffs. He wasn´t badly hurt though.

The Ostland line finally had something to hit back at, and the mummy regiment unraveled to the bane chanted halberds. The halberd troop charged the war trombone, crushing that too.

Turn 4
Unfortunately I don´t have an image from turn 4. Our opponents had now discussed, analyzed, second-guessed and re-done so many decisions and moves that they were running out of time fast. We had a lot of time left on our clock. They still delivered a punishing turn though. The vampire charged Tzarina in the flank, wavering her. The barrow wights were surged into the flank of the lancers opposing them, which with CS3 predictably ended very badly for my guys. The second mummies charged the spear horde, adding on some wounds there. Shooting routed the small halberd troop and the bloodboil wizard finally destroyed my second unit of lancers. A group of sniffs blocked my Sons of Ursun, and the goblin king charged my Kossars, disrupting them.

In return, the spears counter-charged the mummies, but were not able to rout them. The Sons of Ursun charged the Sniffs and predictably killed them, but were now staring down the barrow wights.

Turn 5
Fly + surge is nasty! The barrow wights once again managed to move into a flanking position, and then Jarvis surged the bastards right into the flank of my Sons of Ursun. The goblin king also joined in, and together (at least that is what the goblin king is telling everyone), they routed my giant bears. Tzarina could not withstand another vampire attack, and routed, leaving me with only my Kossars.

The Ostlanders were able to extract some revenge however, as the second mummie regiment was destroyed, leaving our opponents with only heroes, a troop of sniffs and the badly wounded wights. Most importantly, our opponents now only had 1 minute left. 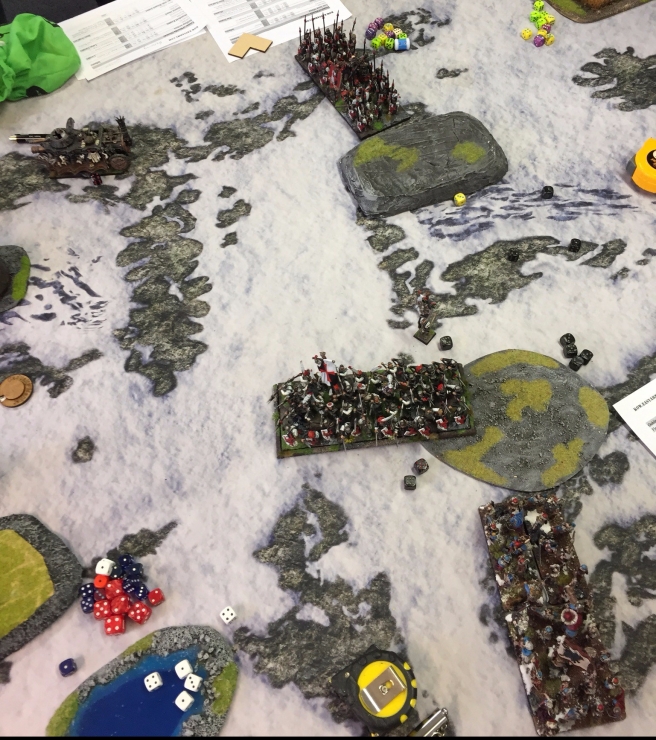 Turn 6-7
With one minute left, our opponents managed to scatter their forces to two quarters we would struggle to contest. It was of course not enough, as we held the center two quarters, which gave us a 3-2 score on scenario when the evil side was out of time.

We then got to play two full turns out with our remaining 20 minutes on the clock. With all the time in the world, my kossars took aim and finally wiped out the barrow wights. The halberds turned around and hacked apart the damned blood boil wiz and Jarvis in the same turn, followed by the goblin king in the last turn. The steam tank ran over some sniffs and took the top left corner for fun.

All that was left of the enemy was the vampire hiding in a corner. We had scenario and also had a good lead on victory points, earning us a 17-3 win.

If our opponents had not run out of time, this would have been a nail-biter finish that was leaning in their favour. Their list was very well suited to the scenario, with a ton of fast scoring units. While damaged, they had several dangerous units remaining, which we would have struggled to engage efficiently. We could still have won, but we would have to depend on the archers being able to take out the bloodboil wiz to have a chance, and as the king could disorder them, we would probably have one round of shooting at best. Else, it was just a matter of time before he exploded the progressively more wounded infantry hordes.

Thanks to our opponents for a very close and challenging battle, fought with good spirits. Just a tip to our opponents (and any readers) for playing cleanly:
1: If you are not sure where to move the unit, place a token where it started, so you can move it back and remeasure. Once you are happy with the move and start another unit, leave the first one alone, or at least ask your opponent if it is ok that you go back to the already moved unit. In a game where small changes in distance and rotation can matter a lot, going back and forth, redoing moves, quickly becomes sloppy.
2: Even nimble speed 10 units cannot move everywhere. Don´t pick up and place units, move these types of units like any other, measuring and doing proper pivots so your opponents can also see that the move is legal.

As stated, it was still a great game, these things would just make it even better, and would very probably also have saved a ton of time usage, allowing our opponents to play out all turns.

MVP: Hard to pick one unit, but it goes to the lancers that took out a regiment of sniffs and a huge chunk of the barrow wights. While not insanely impressive damage, they held their own and dished out enough damage for the rest of the list to catch up and take out the enemy army. When faced with almost twice their points in opponents, you can´t ask much more.

Enemy MVP: Barrow wights. Fly, 18 attacks, CS3 and shambling is a very dangerous combination that ended two of my unhurt units in a single turn from hard to stop flank charges.