I have not been able to find any awesome fantasy viking miniatures to make my Norse marauders from out of the box (possible exception with Red Box games Norse, but too expensive for building double hordes of), Instead, I have converted up 60-ish Norscan marauders from a variety of sources, including: Russian Alternative, GW, Reaper miniatures, Blood Rage, Avatars of war and Enigma miniatures.

As I have many projects I want to do, I want to try to get the Norscan army to a playable state quite quickly. To do that, I need to try to speed up my painting. I have brought out my cheap airbrush, which I have not used for years, and have base coated all the marauders. I pushed myself with the airbrush, previously I have only used it to lay down the base color of space marines, but this time, I used it with more precision to do pretty much all the color blocking. I was impressed that my very cheap 70$ setup managed to have enough control to block out all the major areas of the minis. I am now considering upgrading my set to get even better control of the paint and air flow.

Laying down the base colors took about 4 hours for about 50 minis. With this base, I have been painting batches of 10 minis at a time, and have managed to finish 20 in just two evenings, about 3 hours per set of 10. This is lightspeed compared to my normal speed 😀

I think the result is good enough to tabletop, and with interesting basing, I think the army will look great with this standard. The color palette is limited, both to keep them fast to paint, and also because I like the look of darker metals and muted colors for chaos. The bases will provide contrasting colors as well, so  it is good that the minis themselves are muted.

With the 7 minis I have already painted and a Dragon Ogre Shaggoth I got already painted to a decent standard (I will repaint it at some point), the Norse horde is quickly growing towards a playable force.

The Enigma miniatures are 35mm, so they are big. For the brute with the huge axe, I think the height was fine. Chaos warriors grow stronger and are already ridicoulously big, so he is just a chaos warrior that apparently is favored by the Gods. The other guy however got some leg surgery, which lowered him to just a slighly tall 28mm mini. They are great miniatures, really characterful. 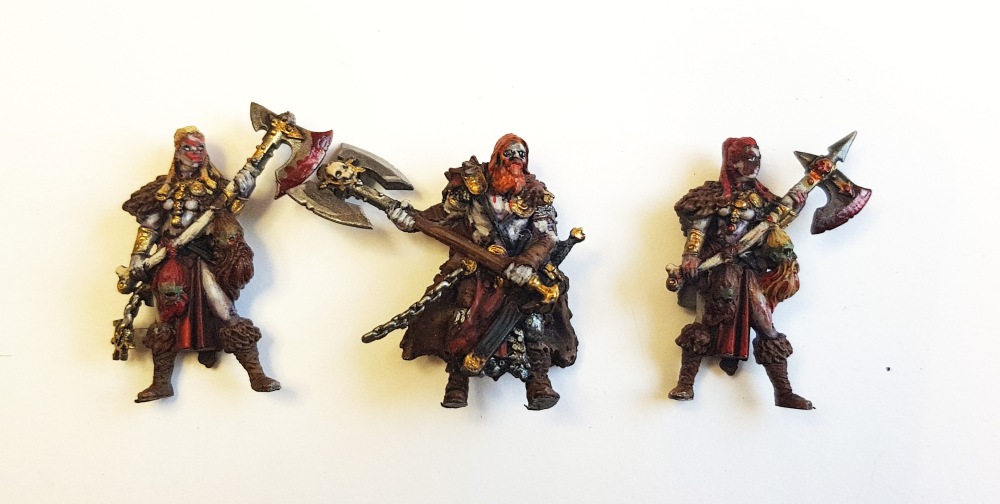 The Blood rage board game is a great source of more viking-y miniatures. These three have just gotten a weapon swap and some trinkets to match the rest of the gang. I have quite a few more of these coming up soon, some of which are more extensively converted. It is possible to get blood rage minis fairly cheap of ebay resellers.

The GW marauder kit is seriously dated. These guys use mostly the torso from the marauder horsemen kit on marauder legs. Even with more modern bits added, these are not my favorites, but they work out ok, and in the crowd, they fit in just fine. GW, a new box of marauders, in style with the WH:Q barbarian would be great! 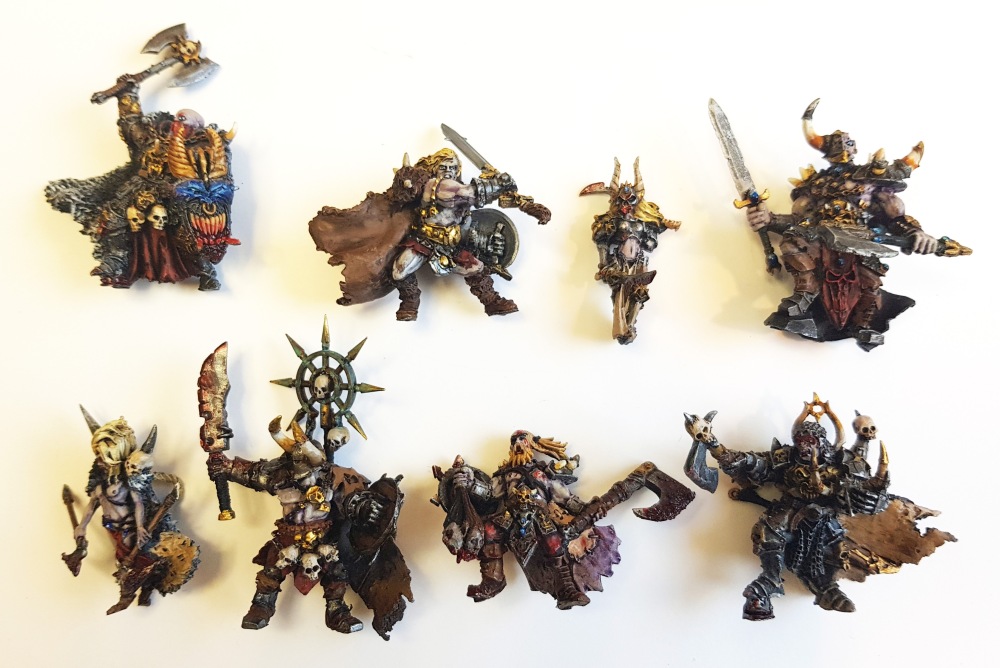 Avatars of war makes great looking heroes. Some of these have been shown before, but I have added some more of these characterful minis to the horde. Conversions are mainly kept to weapon swaps, as some of the weapons are a bit over the top, even for this over the top army 🙂

Reaper makes many viking and barbarian minis. Unfortunately, it is hard to get reaper minis in Europe without excessive shipping costs. Reaper bones however, is readily available through ebay, so I have managed to get some of them for cheap. The bones material is incredibly easy to cut, so converting these was very easy compared to their metal counterparts. With paint and with the weapons changed out, the bones minis really hold their own compared to their price. Unfortunately a lot of the best sculpts are not available in bones yet.