“Right up here, there is a gun-shop. Pissy little place, but sure better than running around with these sorry excuses for weapons.” 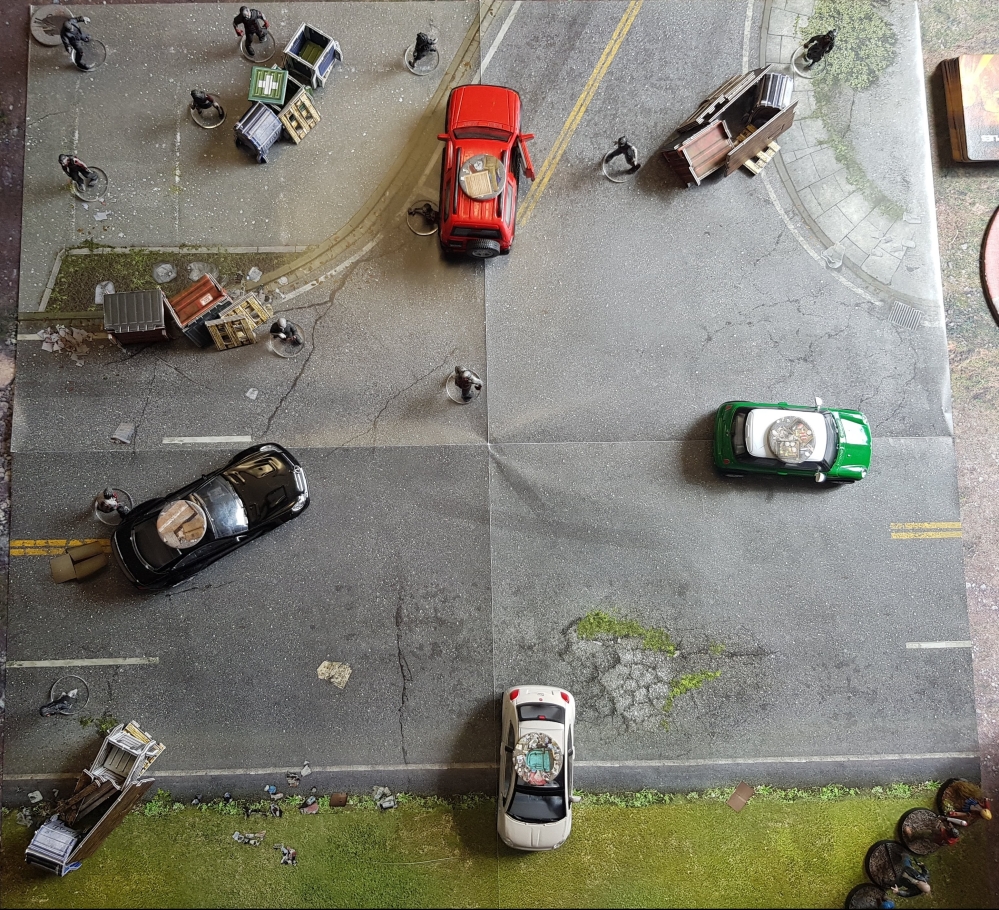 I ran through the gun-running scenario in Days Gone by. Going for a Scavenger group instead of the murderous psychopath Rick. The goal of the mission is to reach the top left objective (representing the door to the gunshop, and smash it open. 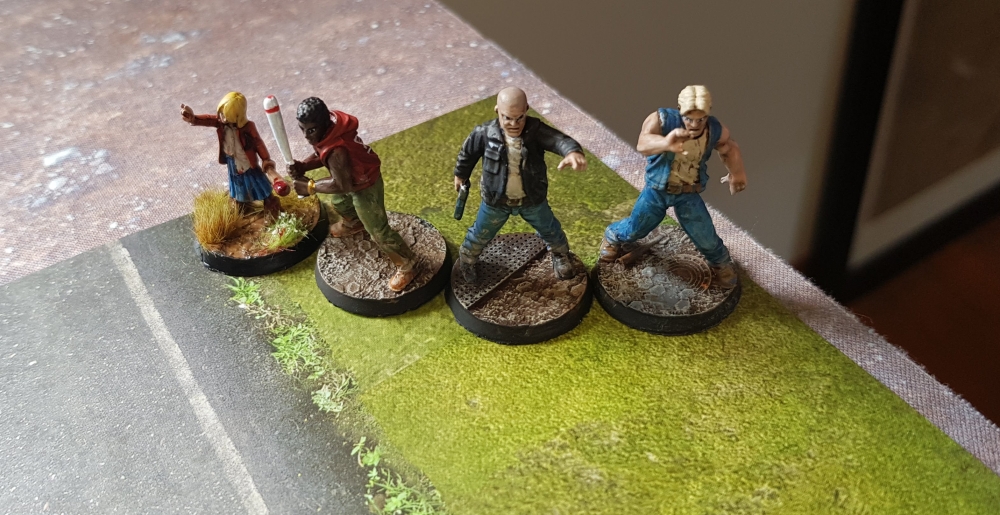 Derek, a member of the Crows motorcycle gang, had gotten a weird little entourage consisting of the useless hillbilly Liam, a street level drug dealer named Patrick and a little girl, Carlita. Derek was no humanitarian, if he found his Crow brothers, he would drop these losers immediately. Still, he needed someone to stand watch while he slept, someone to cook and someone to have his back against these dead ones. Patrick had turned out to be a decent fighter. And with this group, there was no question who was the boss, something which fit Derek just fine. 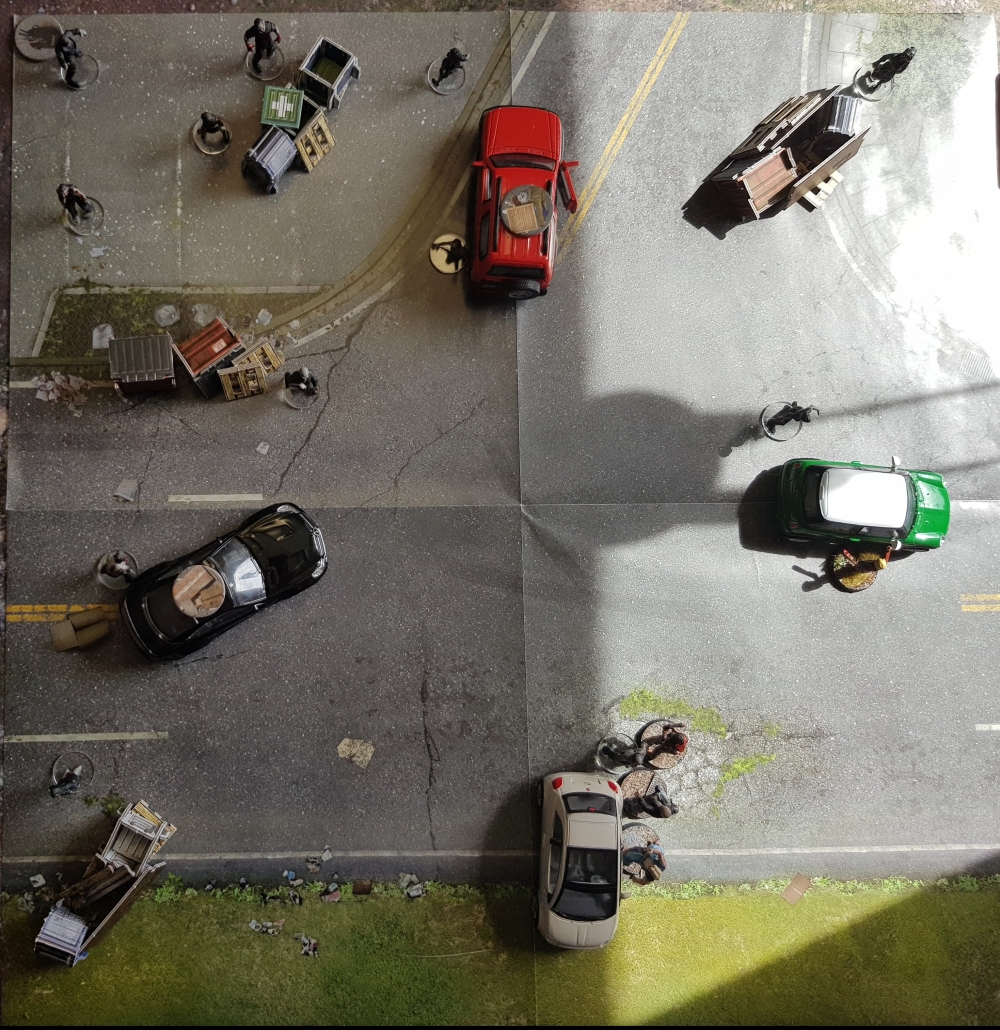 The group split up, the three men heading for a nearby car, drawing in a zombie that they easily brained together. Liam found a tire iron near the car, leaving all the members of the group armed. 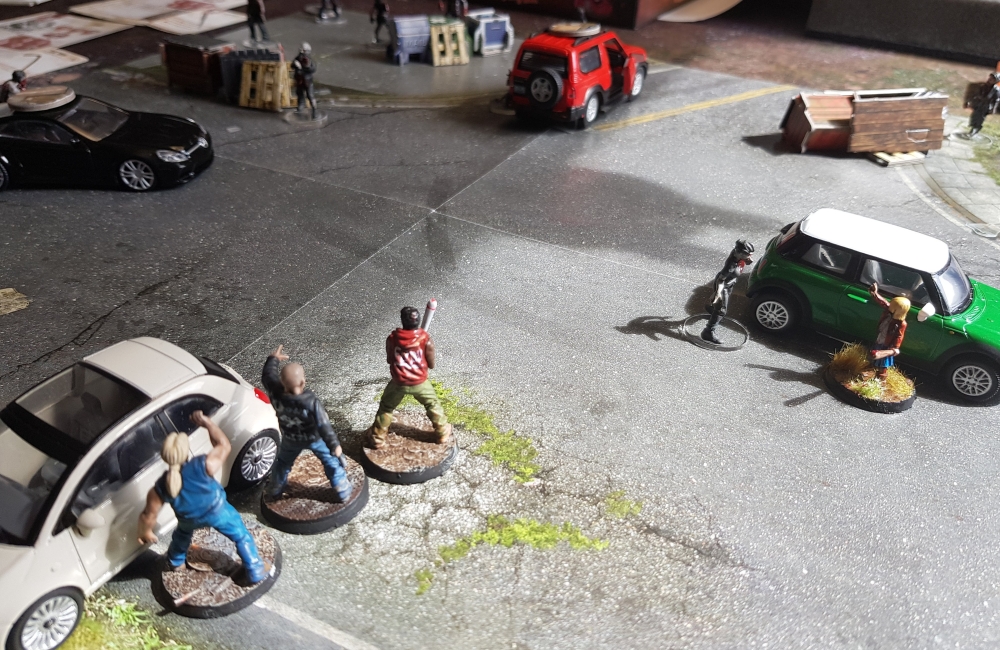 Carlita went alone to the green car and searched it, but drew in a nearby zombie, barely managing to keep it from biting her. 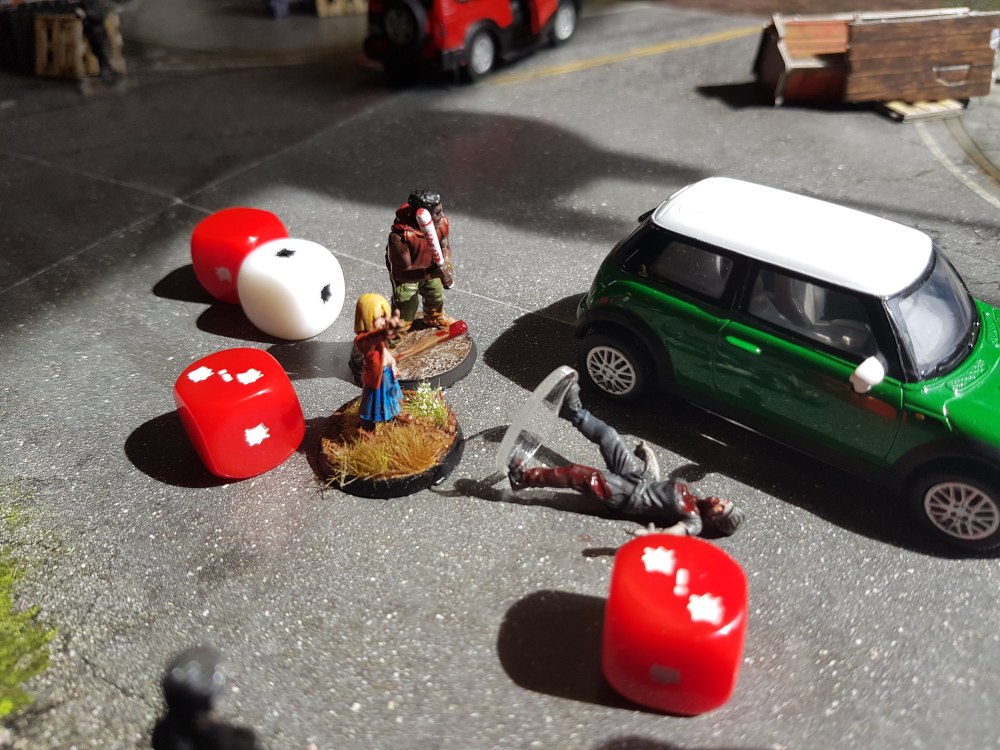 Patrick ran over, pushing the zombie, giving Carlita the room to smash the former cop´s brains in. Derek was impressed by the strength and boldness of the girl. Maybe she would be useful to keep around after all. 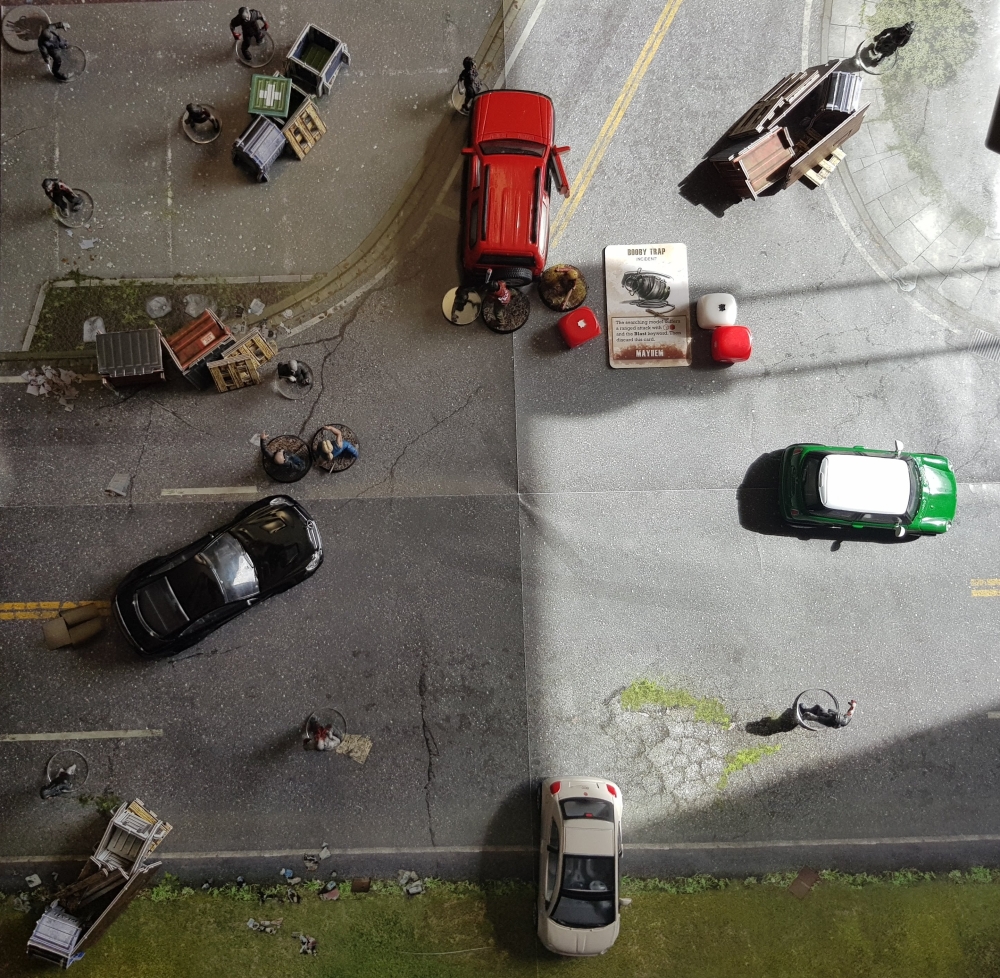 Patrick and Carlita headed over to the red car, while Derek and Liam stuck together, searching the black sedan. Everything seemed to go according to plan, but then disaster struck. The red SUV was booby trapped! Carlita dodged the explosion without injury, but the mayhem drew in several zeds. Patrick was embroiled in hand-to-hand with two zeds, while Carlita had to contend with one. 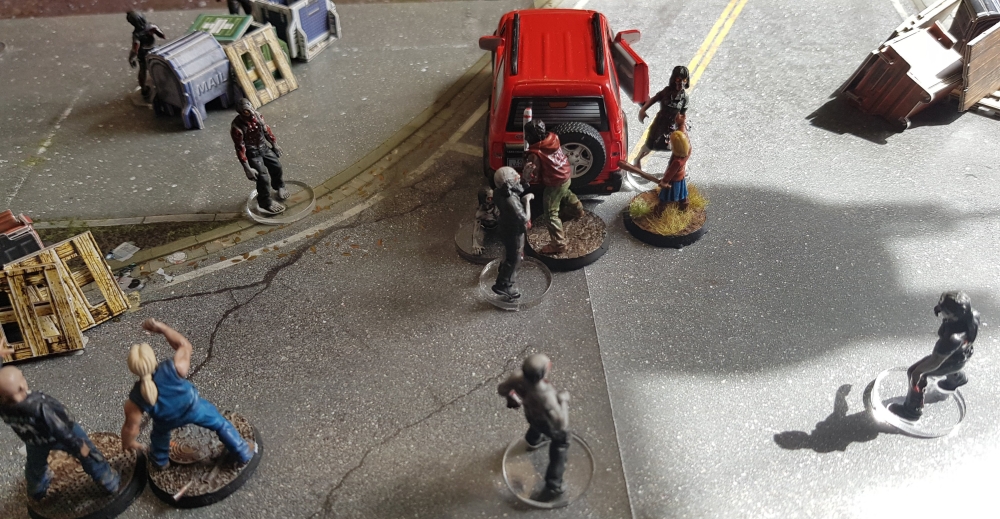 I then drew a very unfortunate series of events. 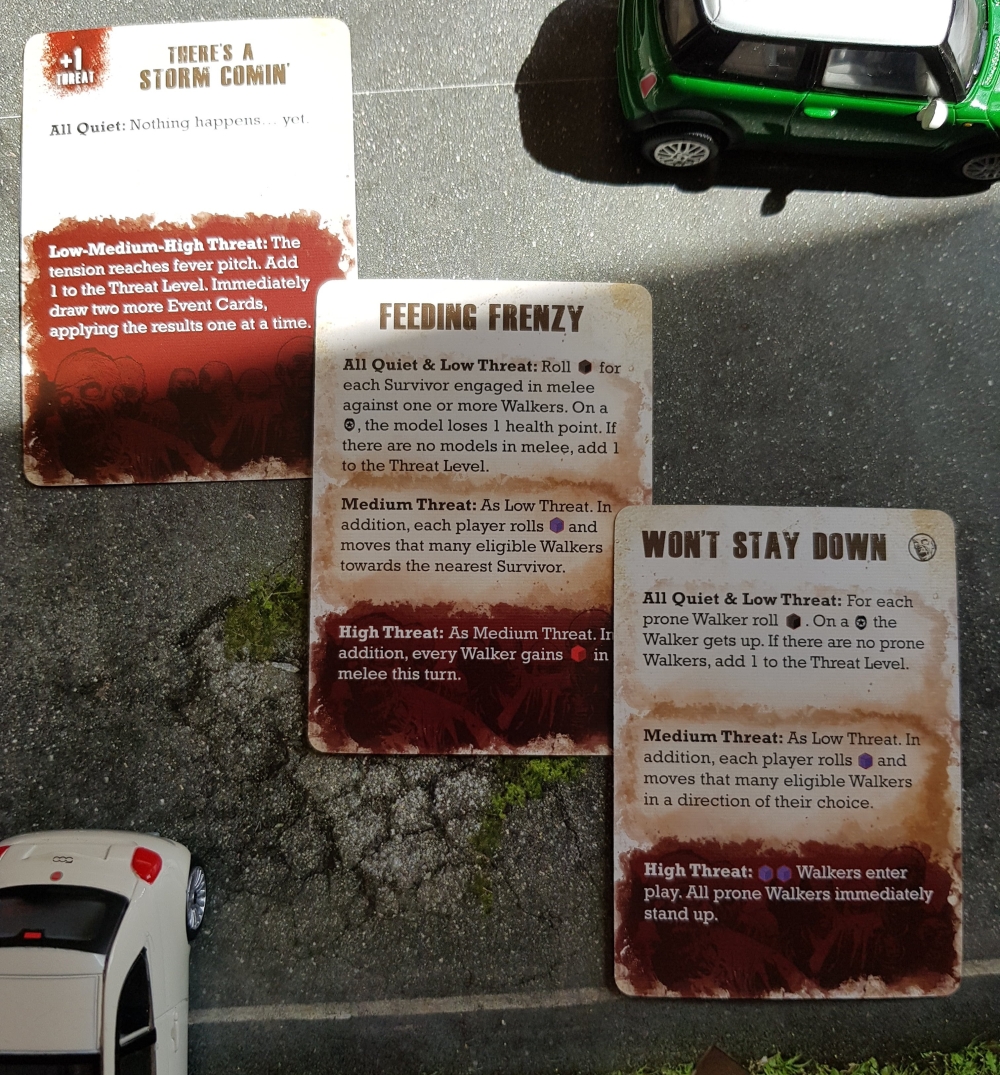 Ouch! Three event cards, and with medium threat and a high roll for number of walkers, this turned the game from easy to brutal in a single event round. All my team members took damage from the feeding frenzy. Then this happened… 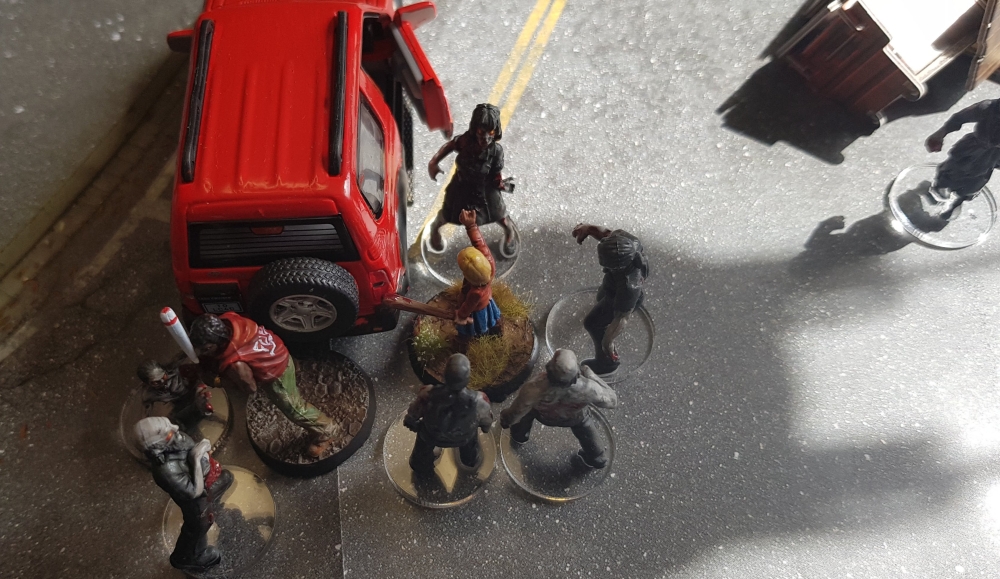 Even Rick would have struggled with four walkers at the same time. Poor little Carlita stood no chance and dissapeared beneath the walking dead. Patrick managed to end one of his attackers and push back the other. 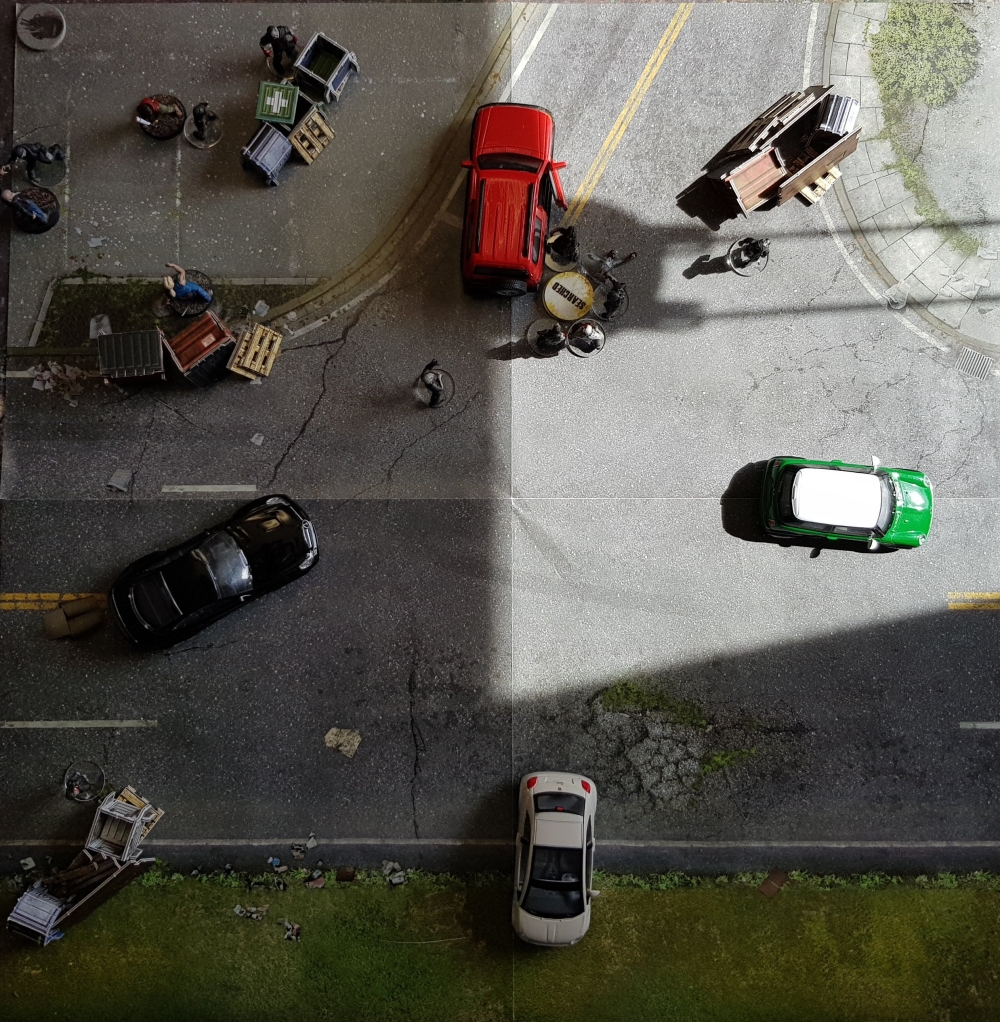 “Fuck! Let´s get the hell out of here!” Derek shouted over the panicked shrieks of Carlita. The three men quickly ran from the herd, both Derek and Patrick getting embroiled in melee with a walker each.

Liam, not wanting to be the next victim of the herd, also ran up. 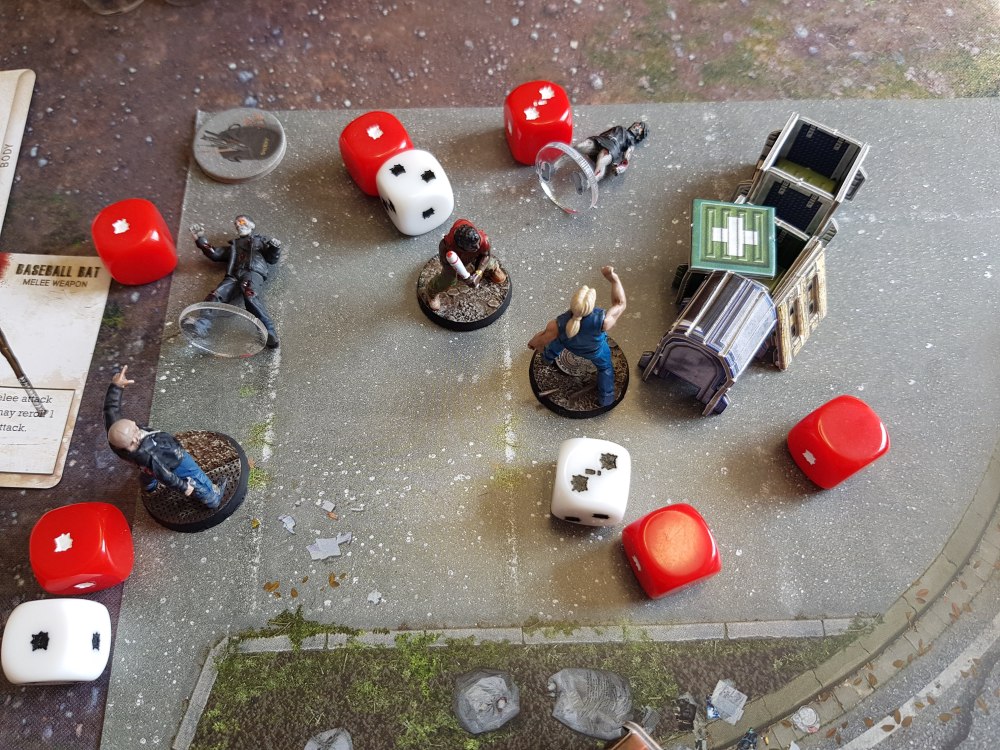 Two walkers were knocked down, and Liam tore the head of his opponent open with his tire iron. 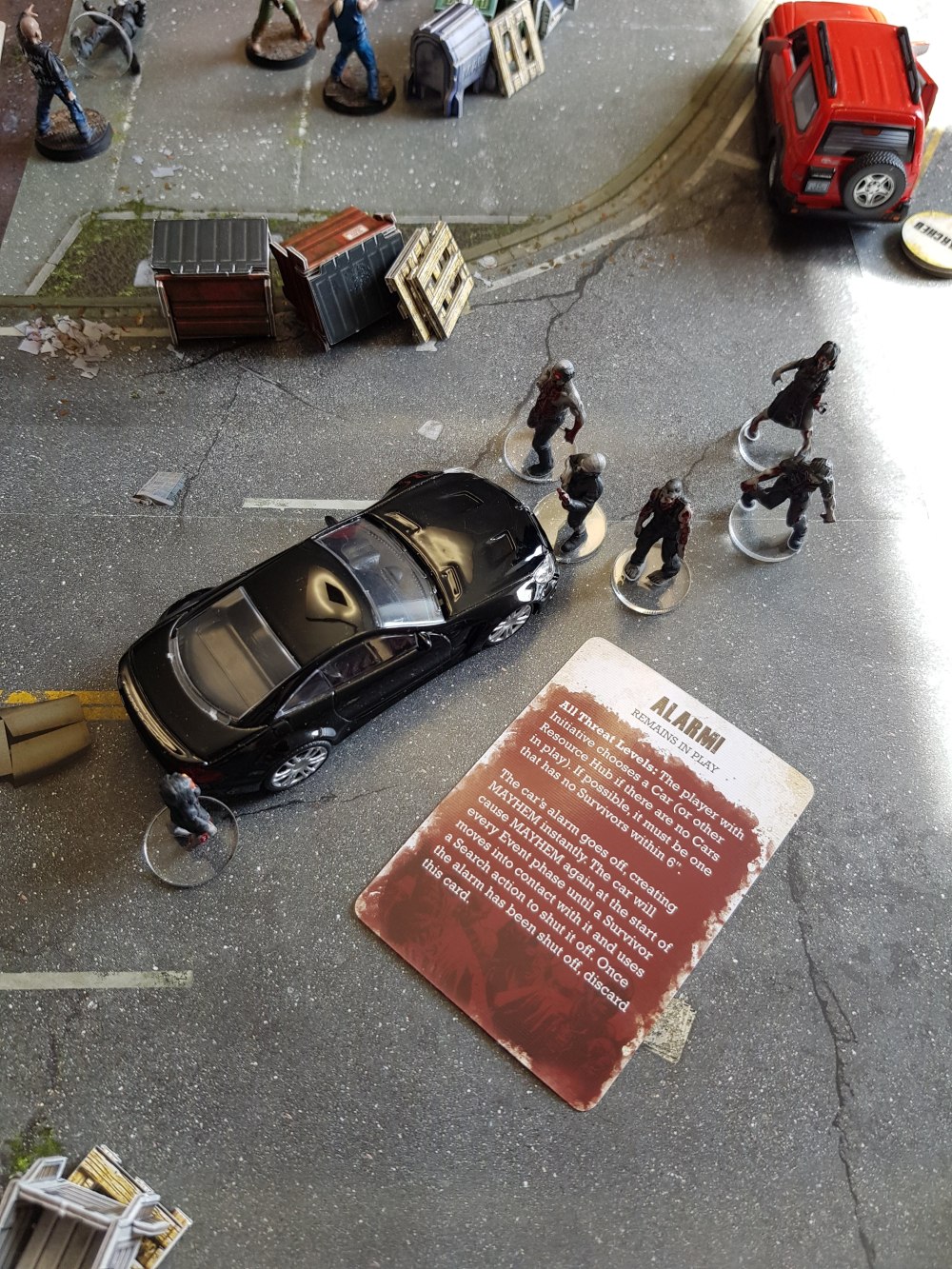 Suddenly, a car alarm started going off behind them, luckily drawing the herd away from the fighting. 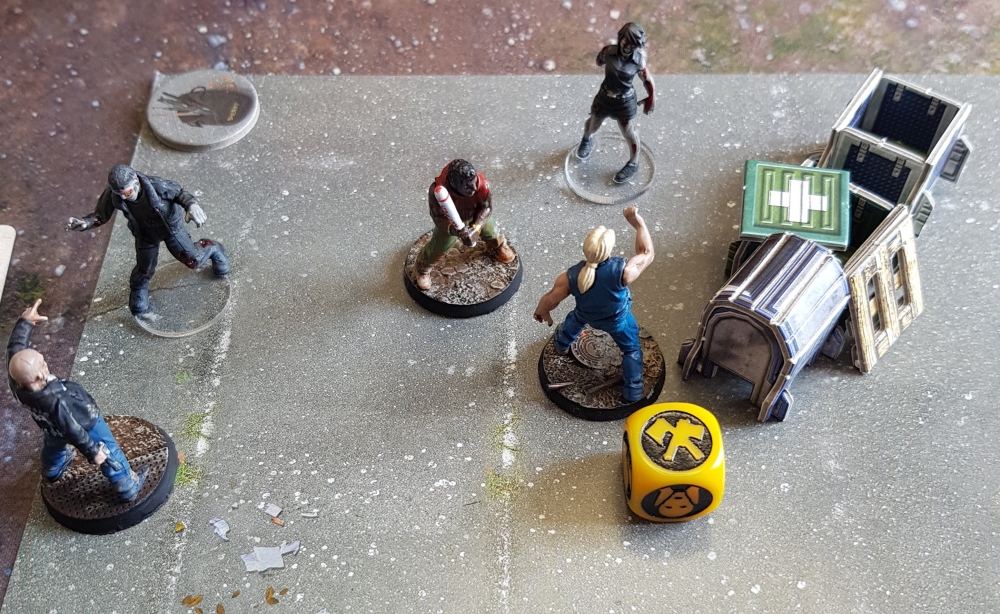 The tension was running high, the car alarm going off did little to soothe Liam´s frazzled nerves. “We got to kill these bastards and get the fuck out of here!” he charged in a berserk frenzy at the nearest walker. Patrick and Derek ganged up on a single walker as a herd was closing in fast. 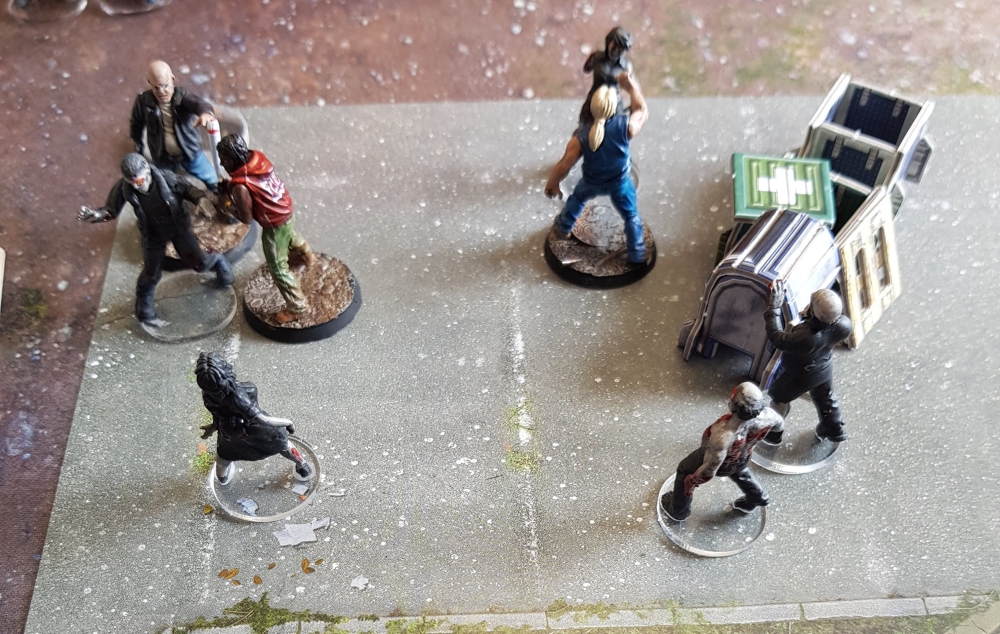 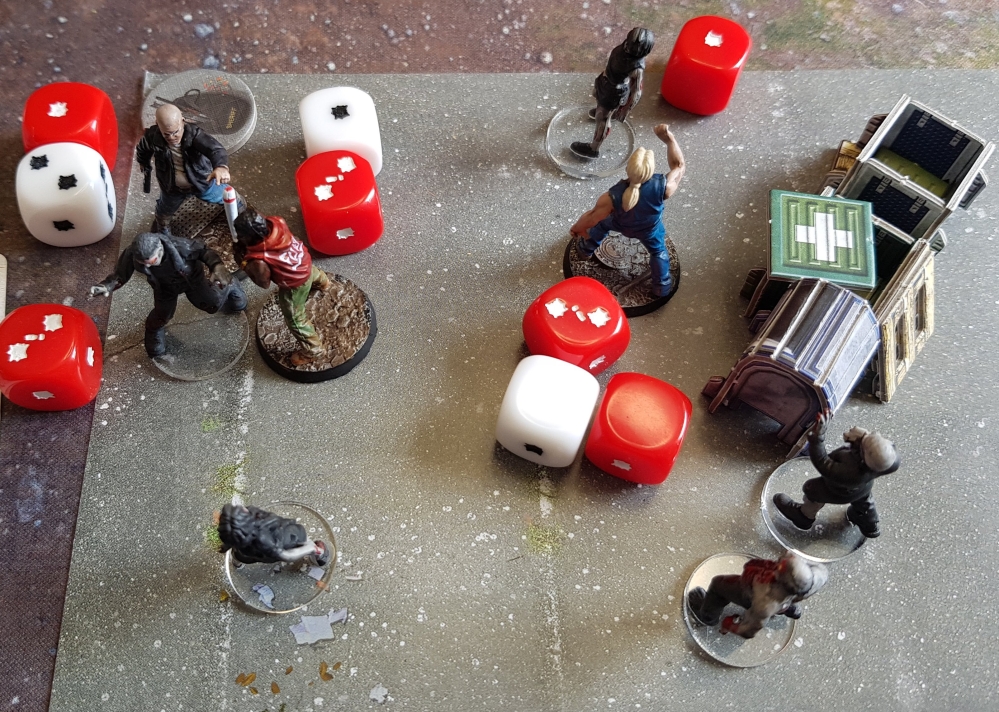 Both walkers were killed off, giving them time to try to break open the door. Derek tugged and pulled at the door, pulling in more walkers. but could not get the door open. 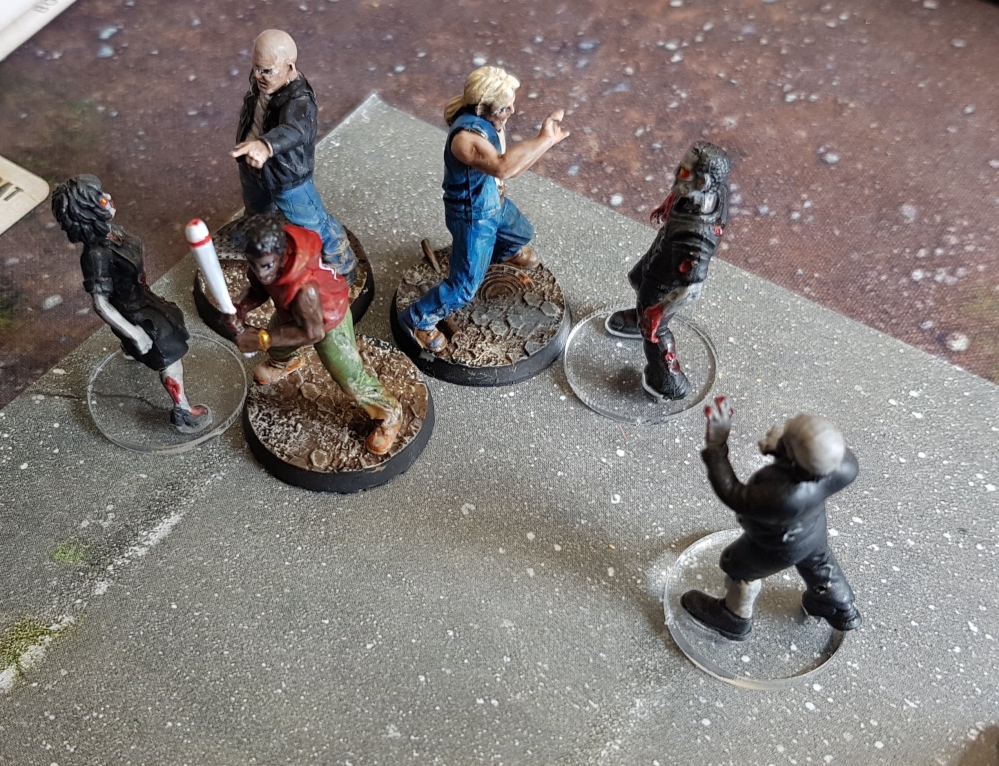 With their backs literally against the wall, the group fought of the approaching herd back-to-back, Liam and Patrick managing to push the zeds away for just long enough for Derek to get the door open. The three men got inside and barricaded the door behind them.

In the last possible turn before the threat counter maxed out, I managed to smash the door, giving me a win on the scenario just in time! 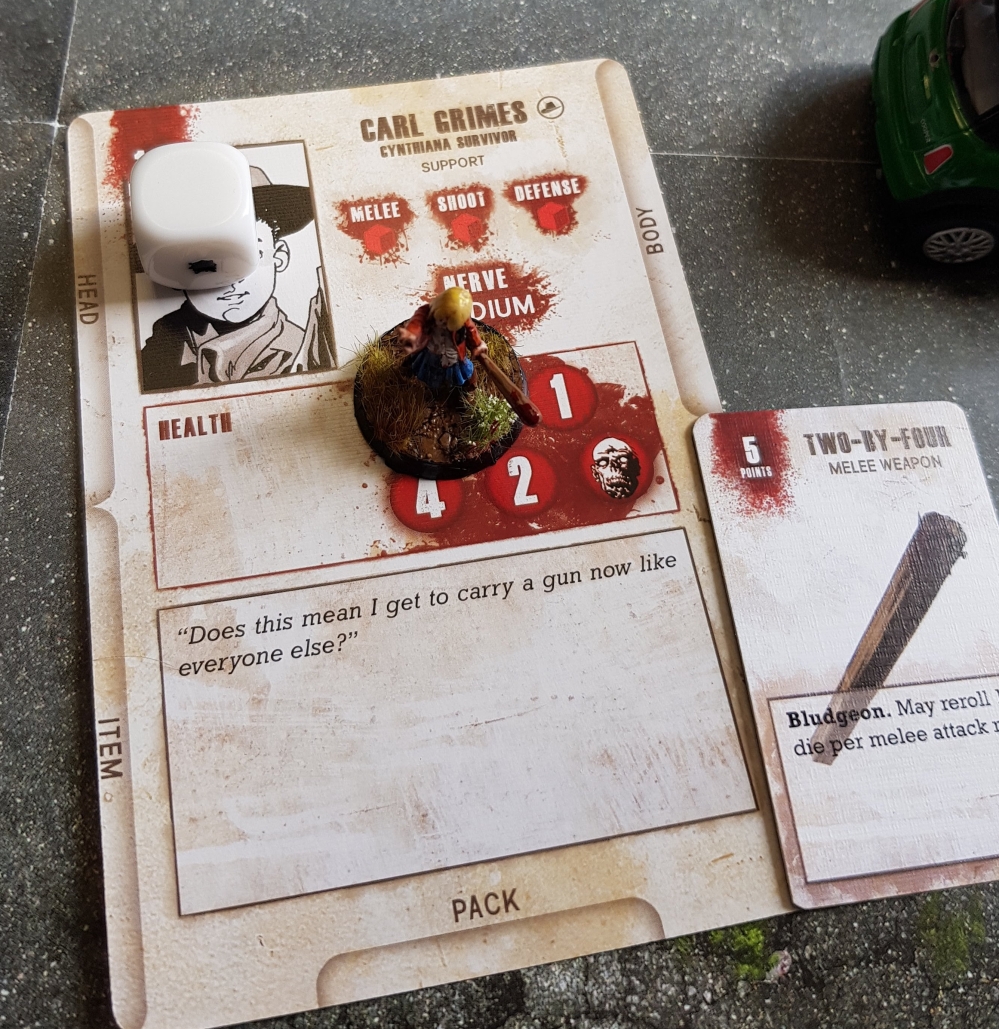 Carlita had to make a survival test. If you roll any headshots on a white die, she dies. Luckily, she had managed a Glenn-like escape from the herd, probably slipping under the car in the chaos. 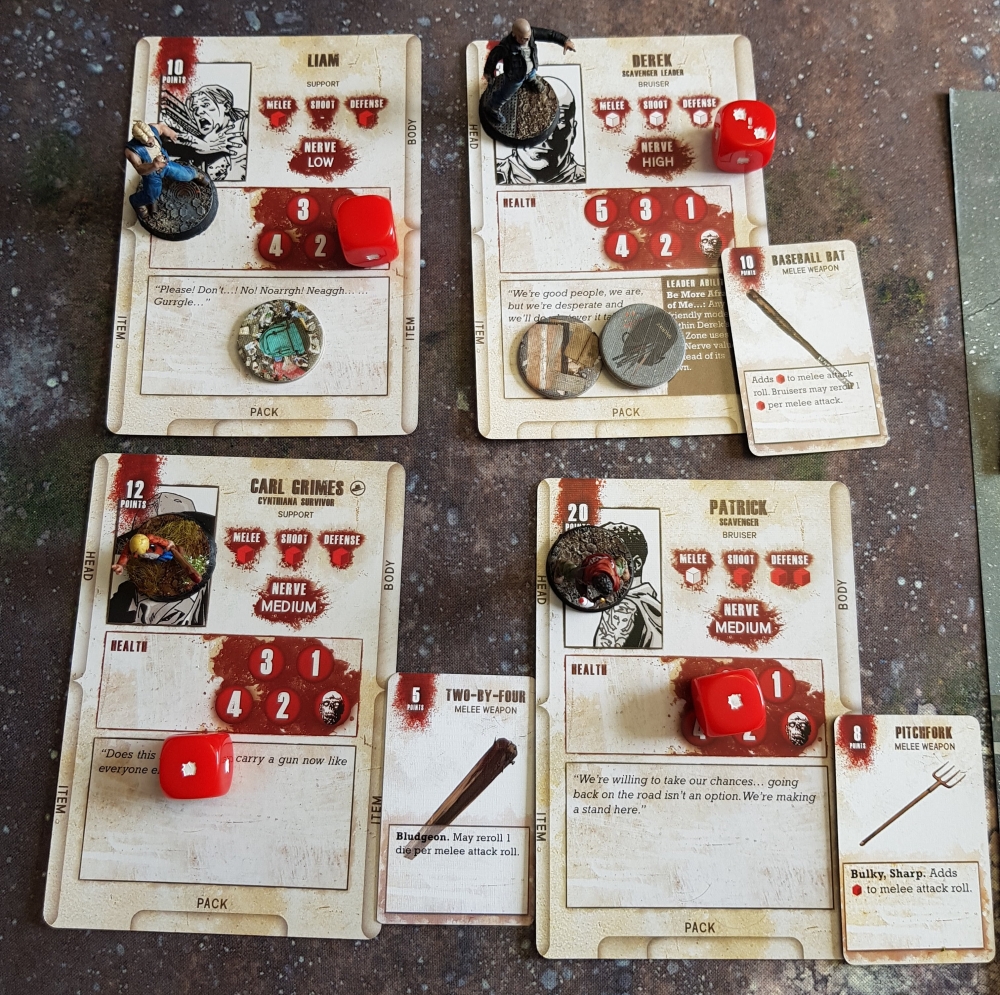 The group got some experience points. The boss getting two, and only Liam not learning anything from the encounter, even though he did fairly well during the game. Derek adds his two red dice to his melee score for the next scenario.

The group worked well enough. Derek´s leader ability was gold when the threat went into high, keeping Patrick and Liam cool for many rounds. It is also nice to bring some cheap characters like Liam so you can attempt more “keep your nerve” actions, extending the game for several turns.

Overall, another very positive experience with Mantic´the walking dead. I highly recommend it as a more serious zombie game.

3 thoughts on “The walking dead: Gun-running”