Bases are really something that can push miniatures to a much higher level. If you are an average painter, you should really look into doing more than minimum with your base, and you will quickly see how much better your armies look. For Kings of War in particular, which operates with multibases, it is really possible to do fabulous things by spending some time on your bases.

We had a hobby contest in our group for who could make the best multibase this month. My Norscan forces have fairly intricate basing already, but I decided to up it a notch for the contest and try to add a bit more of a story to the bases. Click images for larger view. 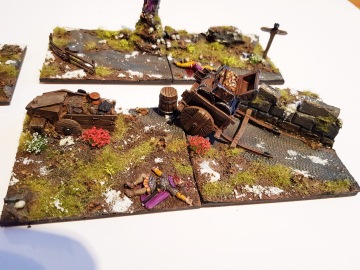 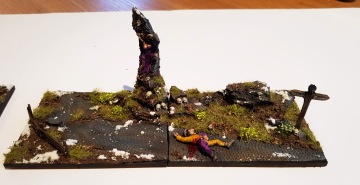 I made two horde bases, but split them in regiments since I already have two hordes of Norscan infantry on single horde bases, and I need some flexibility in making lists. I also made a troop base and a 75x75mm base for an upcoming giant.

For the 75mm base, I wanted to show a small chaos shrine that some locals have erected in the middle of the woods.

The troop base is for my reavers. I wanted to show them in the process of tearing through a town, with various items of civilized society scattered about as people flee their onslaught.

One of the horde bases is also from within a city. The raiders have broken a make-shift defensive position and have started the process of looting the town, stacking chests onto a chariot to haul away.

The last horde base shows a scene in the countryside surrounding the raided city. The Norscans have captured a noblewoman and strapped her to an obelisk, probably a sacrifice for their victory. A sign along the road points to Bechafen and Doran, cities in Ostermark. The uniforms of the dead also show where the raid is happening, with the colors of Ostermark. I really like the Ostermark color-scheme, so it is nice to be able to paint a few figures here and there with the uniform without committing to an army. Another advantage of scenic multibases I guess 🙂

All my bases have some uneven heights. It is very helpful to build up at least parts of the rear of your bases to help show off more of your units. Tip of the day 😀

There were also a lot of other great contributions to the contest, some of which you can see below: