We had a small 1-day tourney recently. It was 2250pts, which is new for our meta. I decided to bring out my Kislevites for this tourney, as I figured I could make a 2250pts list with only needing to paint one miniature.

It looks like a fairly random list, and to be honest, I did not think it would really work when I first tried it out. To my surprise, it actually works pretty well. With Orlaf teleporting behind enemy lines, two flyers doing shenanigans, some fast hard hitting units and some shooting, the army feels like it always has some tools to work with. Surprisingly, I have often been able to set the pace of the game with this army, pressuring the opponents into hard / bad moves that open opportunities. It is a really fun army to play with, and it feels balanced.

Game 1 vs Dwarfs – Kill + invade (70pts per US for invade)
For the first game, playing a Kill+Invade combination, I was paired against a fairly new / inexperienced player. He was playing dwarfs, and had something like the following:

The list itself was good in my opinion. Organ gun, flame priest, Golloch and Hernas´ rangers form a shooting core which can also do a lot in close combat. A line of infantry supports the shooting. The berserker lord is of course pretty much the best individual in the game, especially with beast slayer, and together with the battledriller, he has some answers to flyers. Brock riders need a nerf in my opinion, so two units of those are of course great 🙂 Overall, just looking at the lists, it looked like a fairly even match-up. However, I have played him before, and I knew that he was a lot less experienced than me, so that tilts the match-up a lot.

It was kill, and he had slightly more shooting than me, so he could in theory castle up and force me to come to him. It quickly became clear that most of his army would be in the middle, and that the brocks would pick one of the flanks. I loaded up on the flank I did not want the brocks on (no shooting lanes), which successfully forced the brocks to be deployed on the other flank.

To fight the brocks, which were my main concern, I placed a volley gun in the bottom right all alone, meaning that his brocks would have to spend a long time to take it out, or I could fire many turns on them if he ignored it. To make it a bit harder, I also placed my Tzarina on that flank, as there was a nice big tower she could hide behind to make the brocks life harder.

The other volley gun was in the middle, with my infantry behind. The infantry were my rearguard, dissuading the brocks from flanking my forces on the left, or at least delaying them for a while.

The left flank had all the rest, and would thunder up in cover of terrain and then rip the dwarf lines open. 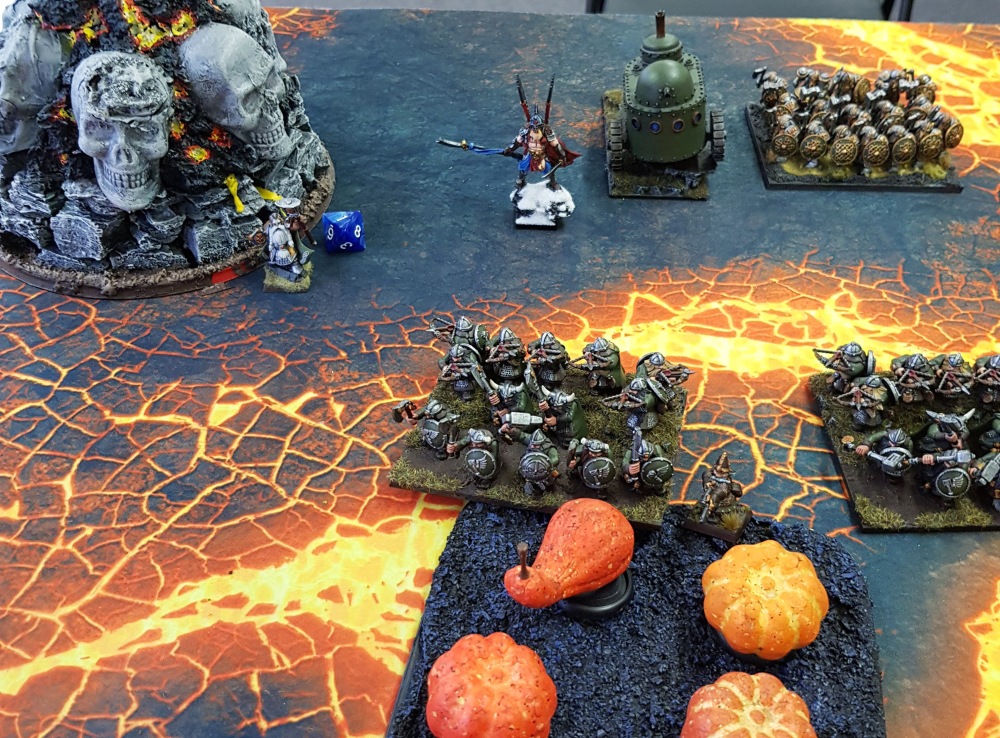 In my first turn, Orlaf teleported into the dwarf lines, in a position to take on the organ gun, rangers, fire priest or Golloch. He didn´t have to waste time on the organ gun however, as I got lucky and took it out with my rangers. My blizz-wiz started bombarding his blizz-wiz. I think I wavered the bastard three times, and he passed his headstrong each time. Headstrong on wizards is pretty damn nice!

On the brock flank, Tzarina flew up behind the tower to make it hard for the brocks to move up without presenting flanks.

In return, his shooting almost took out a unit of knights, wavering them and putting on the pressure. The “trap” I had set for the brocks worked, and he was very cautious in moving them up. 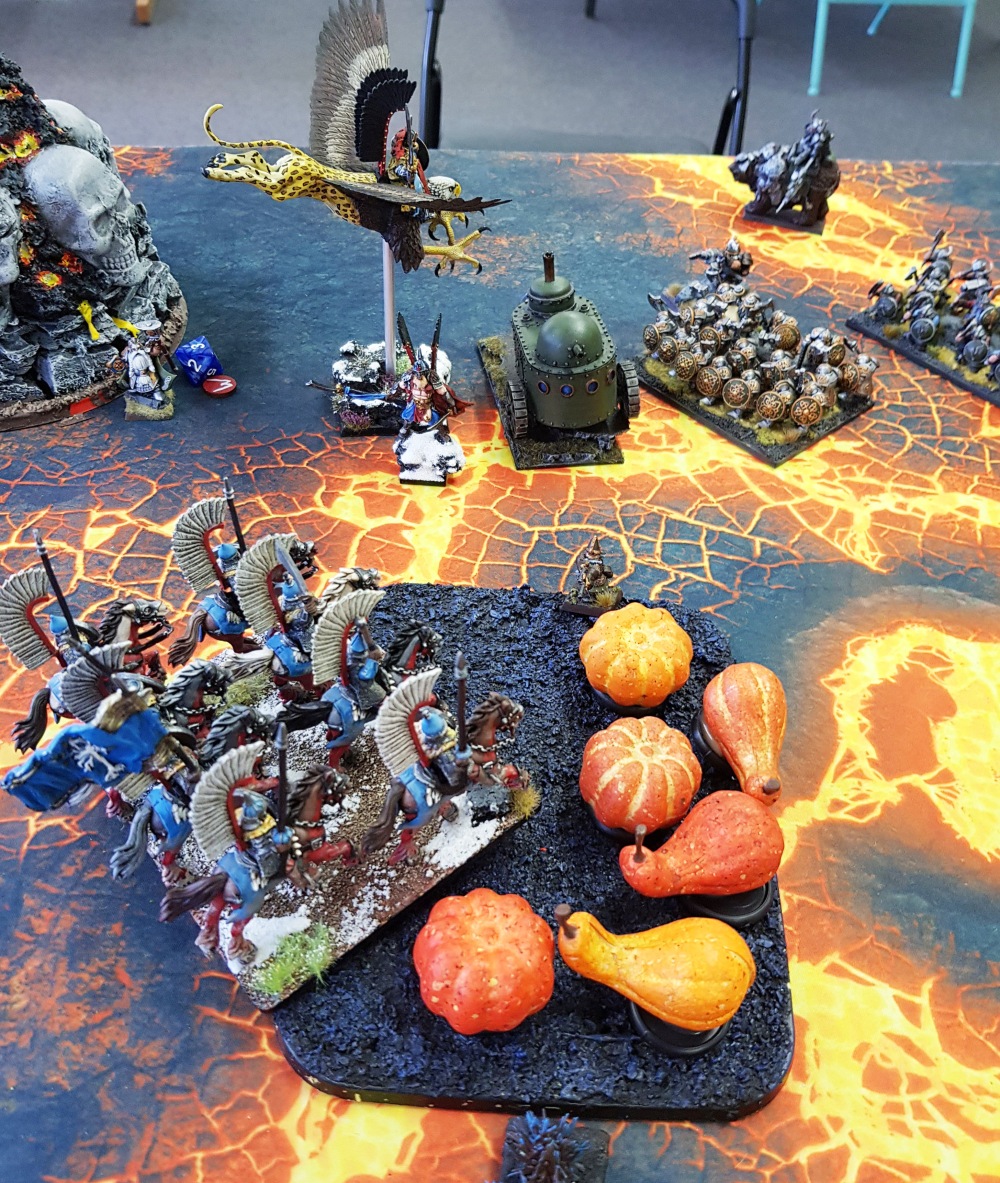 Orlaf and the operational unit of knights teamed up to destroy a unit of rangers. My griffon got a flank charge on Golloch, shutting down the massive gun before it could get a shot off, and starting the long slog to tear it down. My shooting managed to kill off the other ranger regiment (I didn´t know they got stealthy from the formation and he forgot unfortunately).

He charged Orlaf with his Iron Guard and the knights with Golloch. The brock lord moved over to help on the left flank. However, neither unit was able to get through their targets.

By turn 3, my honour guards were able to get in on the action, and charged Golloch together with the knights. Some bane chant, TC and CS later, and the massive machine was no more. Orlaf started to hack away at Herneas to stop him from shooting his massive cannon. Tzarina jumped over the tower now that the brock lord was gone to taunt the brocks. By now, the brocks were also in range of my volley guns, so they were starting to take wounds.

My griffon spotted a flank on the shieldbreakers and took the charge, not managing to take them out, but hurting them badly. The dwarf line was buckling. He was not able to do much back, mainly just counter charging here and there.

In turn 4, my honour guard spotted a nimble charge on the battle driller that would also take them into good overrun range of the berserker lord and then the ironclad flank. I took the charge, overran the driller, but the berserker lord stood firm. The shieldbreakers were taken out by the griffon. One of the brock rider regiments had wandered into range of both volley guns trying to avoid giving rear / flank to Tzarina, and it was almost killed by shooting.

The game looked like it was totally locked up, but then the Berserker lord got into the action. He wavered the honour guard in turn 4 and then smashed them apart the turn after. My knights and flyers took out the surrounded ironclad horde, herneas and the badly wounded brocks, but I lost Orlaf to the iron guard, and my knights were seriously damaged. In turn 6, I got a charge on the berserker lord with my badly wounded knights, and barely managed to take him out, which saved the knights from dying.

In the end, he only had a unit of brocks and the iron guard left, and my entire army was in his half of the table, so I got a 20-1 win.