“They know how to fight. That’s what you have to remember about them. People talk about the strength of their armour, or the ferocity of the Blood God’s worshippers, or the intimidating look of their horns and spikes. It’s their sheer skill at war that wins them their battles though.” 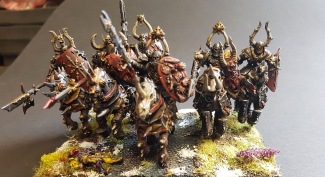 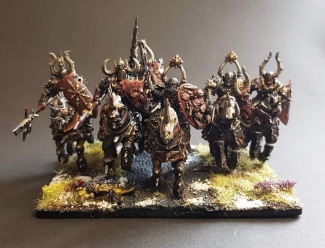 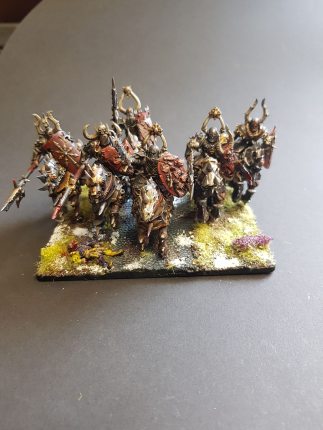 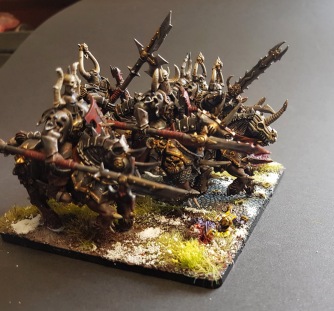 Breeding horses in the cold, blasted tundras, mountains and deep forests of Norsca is not an easy prospect. Large cavalry formations are also hard on the logistics of a mainly sea-faring people. As such, the forces of the Norscans have few horsemen, instead massing large infantry formations supported by magic and monsters. When they band with the other forces of chaos for larger invasions of the southern lands, the steppe-folk of the east most often provide the mounted forces.

That does not mean that the Norscans are without cavalry. A few tribes have specialized in breeding a horse fit for the rough nature of Norsca. Although calling the beasts they mount horses is perhaps too generous. The horses are massive omnivorous beasts, a crucial adaption as Norsca lacks the fields and pastures needed to feed large warhorses. After a battle, the Norscan horsemasters often send their horses out to graze on the field of battle, eating both off the ground and tearing up the fallen bodies. In lean times, slaves are thrown into the stables to feed the bloodthirsty beasts.

The few men rich enough to own a horse are by default powerful men of war. Veterans of a dozen years or more of raids and warfare, and of course bred to fight since childhood like all Norscans. They may not have the fancy horsemanship of the Hung, but what they lack in technique, they make up for in pure bulk and skill at arms.