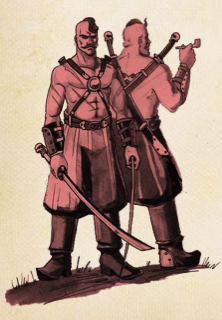 Droyaska is an ancient Kossar term that means ‘Blade Master’, and was traditionally given to the most powerful fighter in the tribe. The word has survived the generations, and today it is both an honorary title given by a chieftain to his personal champion, though it is also used by Gospodar warriors as a more familiar term for an experienced veteran or a warrior that has great skill with a particular fighting style. Most Kislevite cities contain at least one grizzled veteran amongst the ranks of their professional soldiery who has been affectionately labelled ‘Droyaska’ by his men.

The titled Droyaska are the greatest fighters in the Kislev nation. It is a title that only the Tzar or Tzarina herself can formally grant – and more often than not, entire generations will pass by before a new warrior is deemed worthy of the title of Droyaska. They are the equal of any they face – all have been fought, and triumphed over by a Blademaster. Their speed with a blade is blistering, said to be only bettered by the Elves, and even then, many doubt that. A Droyaska is a title, which unlike those to the Imperial Generals and Templar Grand Masters, is not bestowed by skill with commanding troops, but purely by skill with the sword. Usually, the Droyaska is a personal champion of the Tzar before they become a Blademaster, almost undoubtedly rising up from the ranks of the Gryphon Legion or Kreml Guard.

While the formally titled Droyaska are a rare sight indeed, there are plenty of skilled fighters that sometimes band together in the armies of Kislev. Practicing their chosen weapon mastery for many hours a day, these men all seek to become the greatest fighter of Kislev and prove themselves in the eyes of the Tzarina, and what better way to do than to slay her foes on the field of battle?

These wanting Droyaska fight in smaller groups as skirmishers, often with wonderfully crafted blades handed down for generations in each hand, slashing at the foe before they can react. They wear no armour to prove that they only need the skill of their swordarm to survive, they become a whirlwind of destruction as they slaughter their enemies in droves.
– adapted from Kislev armybook by Mathias Eliasson

I managed to get some of the fairly rare kislev mordheim warband miniatures, which fit perfectly as Droyaska, non-armoured weapon-master infantry. (side-note, I want to make a Droyaska hero like the one in the illustration.) This first group is led by another, even rarer figure, a black library Gotrex and Felix limited edition – Ulrika Straghov. I don´t know her background story, but she looks and sounds Kislev-y enough to lead one warband of Droyaska.

I really like the mordheim miniatures, although the youngbloods are not so great once you have more than two. They are very slim, so alternative parts don´t fit well, so I had to greenstuff to get some variation out of the sculpt. That they are also all made to use the same set of weapons makes it kind of difficult to get variation when used as a group. With some bending and cutting, I think the end result has worked well enough though.

I would like to use them as berserkers if my list has room for allying them in or if I play as KoM, but they can also fill in as city militia in the League of Rhordia list. In that case, I guess it is a group of less proficient Droyaska that have gathered 🙂

Another group is on the painting table, pushed back a bit by a group of beefy Norscans, but coming soon enough. I tried a bit different technique with the blue on this group, using one of GW´s new shades. It was amazing to work with! I feel I have gotten even more life into the blue cloth in this group than my usual layering has accomplished, and it was much less time-consuming. As usual, click images for larger view: 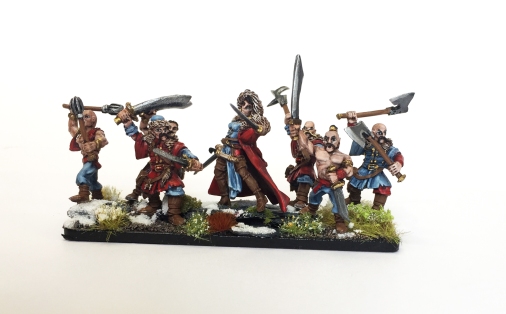 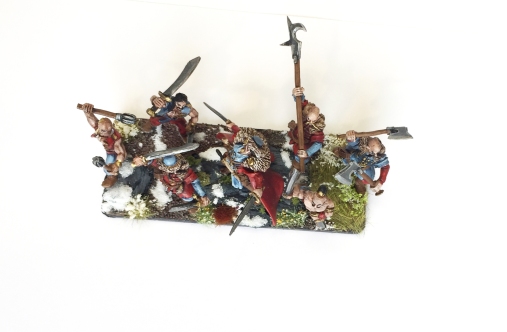 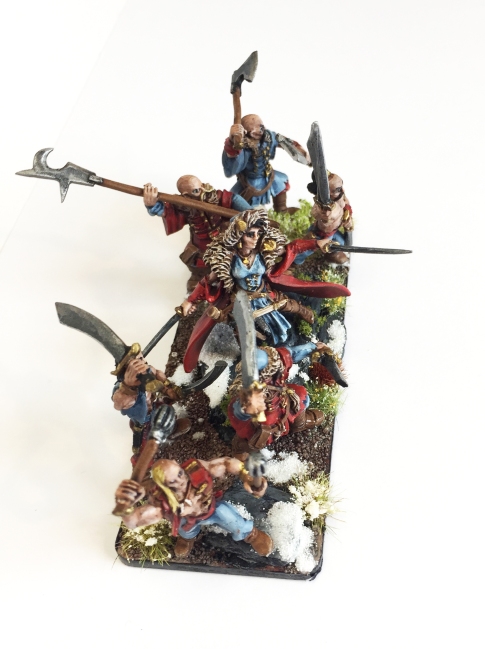 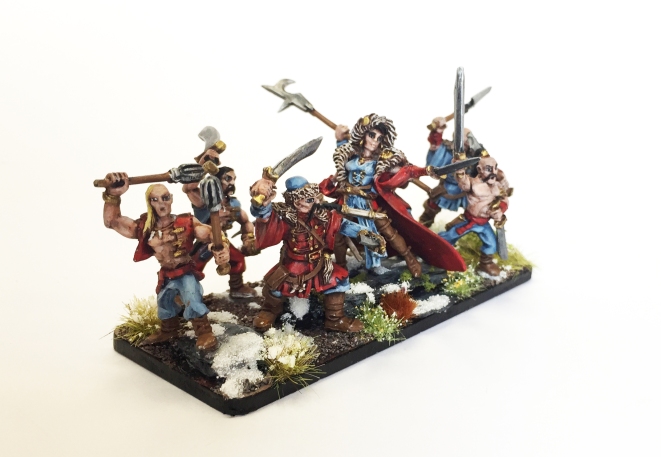 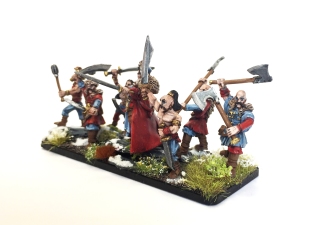 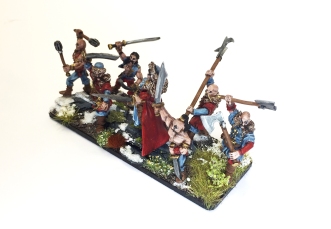 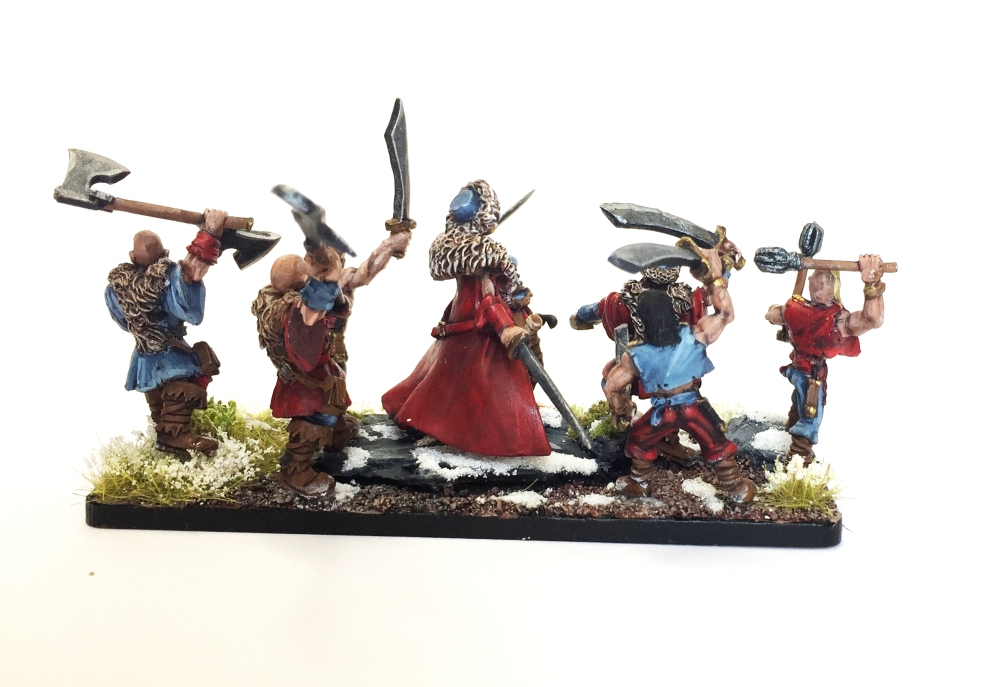