My Marienburgers just got their first taste of Mordheim. I played Martin´s Ostlander warband, an experienced group that had +50% higher warband rating than my newbies.

My warband is as WYSIWYG as possible and 100% based on cool miniatures I wanted to paint, so not very optimized, however, we used some house rules to make sub-par choices less bad.

The Ostlanders were an old warband that had several experienced heroes, including a hero ogre and a wizard with two great spells, a powerful heal that goes very well with the 3 wound ogre and a powerful attack spell that sends hordes of squirrels at people. The henchmen were fairly inexperienced as the last battle they had fought (four years ago) was a brutal one against a vampire. Since the Ostlander warband had a lot higher rating than mine, all of my guys would get +3 experience just from surviving the battle.

We decided to use the following house rules:
Spear: always strikes first, overrides charge bonus
Light armor, heavy armor, gromril armor: gains +1 to their save
Blackpowder weapons: can shoot each turn, but misfire table is in effect
1-handed clubs: Stuns on 3-5 instead of 2-4 on injury roll
Double-handed weapons: Gain the bonus of the type of weapon it is (sword, axe, hammer)
Off-hand weapon: -1 to hit and cannot cause critical hits
Parry: Is a counter-attack, if it hits, it parries

I really liked all of the changes. Parry might need a -1 to hit, but I think playing another game or two with it as is might make the decision easier. Armor actually becomes somewhat interesting, and at least not an active disadvantage with these rules. As historically, it was a very bad idea to go up against somebody in armor if you did not have it yourself (try to play kingdom come deliverance), I like that it becomes at least somewhat effective in game.

Following the information gleaned from the locals about a possible meteor strike in the Dead Woods, van Dorn´s men took a small detour from their route to the city of Mordheim. The ship was docked near the logging camp, and van Dorn personally led a group of men into the gloomy forests.

After a day´s march, the forstjäger scout returned with news. He had found the clearing that the forester had described, and he had seen several rocks that glowed green.

However, he had also spotted a group of heavily armed thugs, including a bruting ogre, moving towards the impact site. From their accent and clothing, he deduced that they were not locals, probably Ostlanders. The Marienburgers split up in two groups and moved to secure the stones before the Ostlanders could engage. 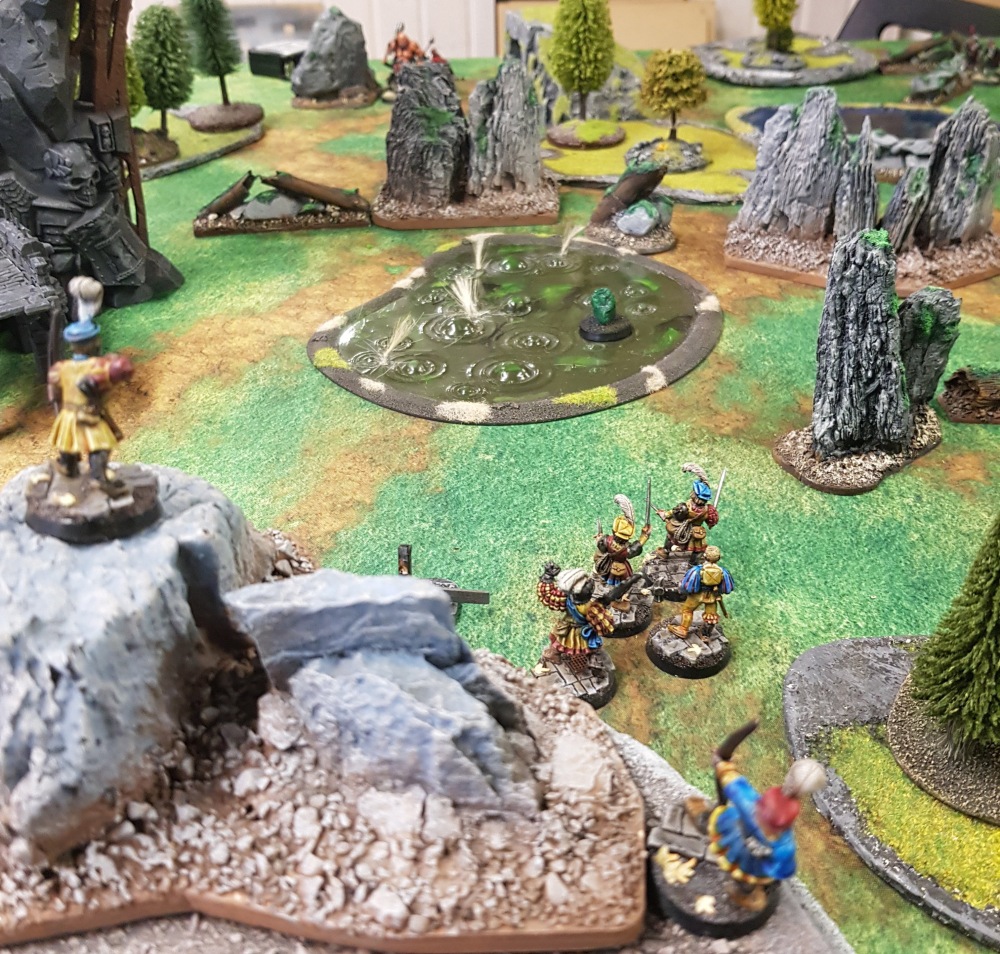 The two bergjägers took up a covering position on a rocky outcropping with a good view of the clearing. Sir Hendrich de Witt led a group of my men towards the stone in the marsh, aiming to secure it before the thugs would be upon us. Unfortunately however, both men going into the swamp to fetch it ended up stuck in the soggy mud, having to be pulled out by their comrades. This cost de Witt´s group valuable time, allowing the thugs to advance upon them.

Baron von Dorn led the second group personally, moving up quickly to secure the stone perched on the wrecked bridge. 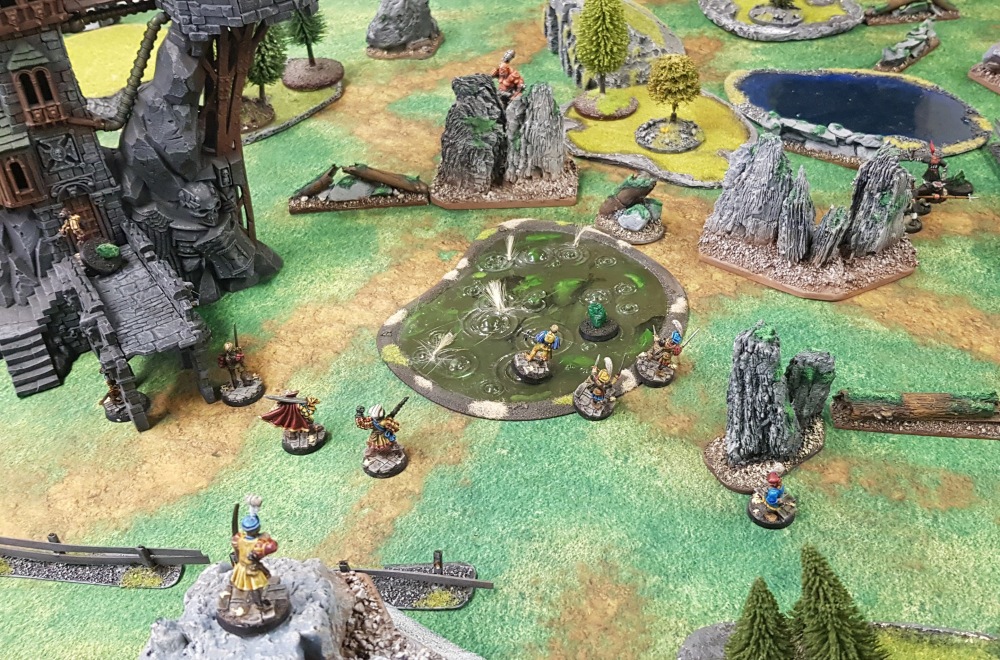 Wilhelmina van Gras, a youngblood with great promise, quickly secured the stone perched on a ruined bridge. She was ordered to immediately retreat to safety with the stone while the rest of the warband moved to secure the second stone. 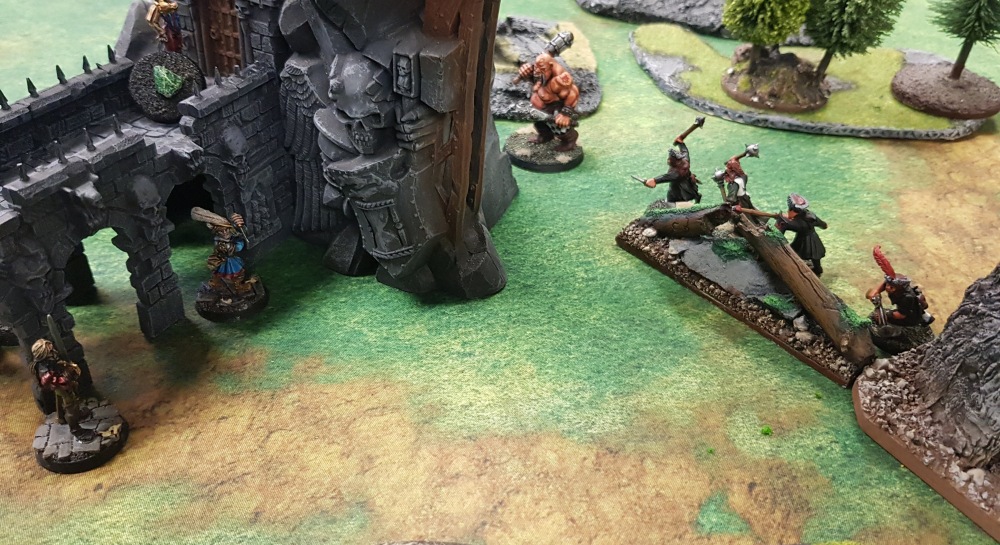 However, the Ostlander thugs outnumbered the Marienburgers, and they attacked von Dorn´s group without hesitation, the loud crack of a blunderbuss ending any doubt about their vile plans. Luckily, the shot went wide.

The Marienburgers fought back, raining arrows and bullets on the attackers. The man with the blunderbluss was knocked out by the pistolier Francois Mandeville´s precise aim. 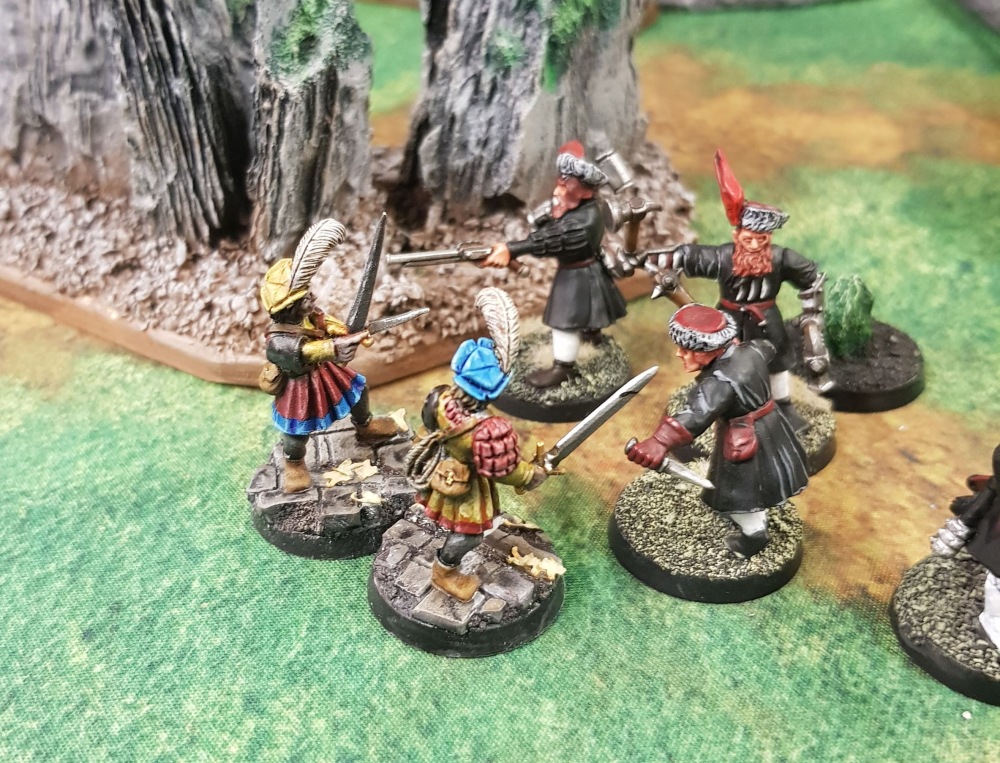 Maarten and Cornelis, two mercenary fighters in de Witt´s group engaged the numerous thugs on the right flank, keeping them at bay while Jakob de Houtman, a youngblood, tried to pry the stone from the marsh.

Maarten and Cornelis fought five of the thugs, parrying slashes left and right, even knocking the leader of the thugs down. The enemy had unfortunately secured a stone of their own.

The Baron was personally endangered when the brute charged in. However, he had not anticipated the skill of Franz Brüggen, a very expensive investment von Dorn had made for the journey. Franz showed his worth as an accomplished swordsman, intercepting the ogre and keeping him locked in a brutal duel. 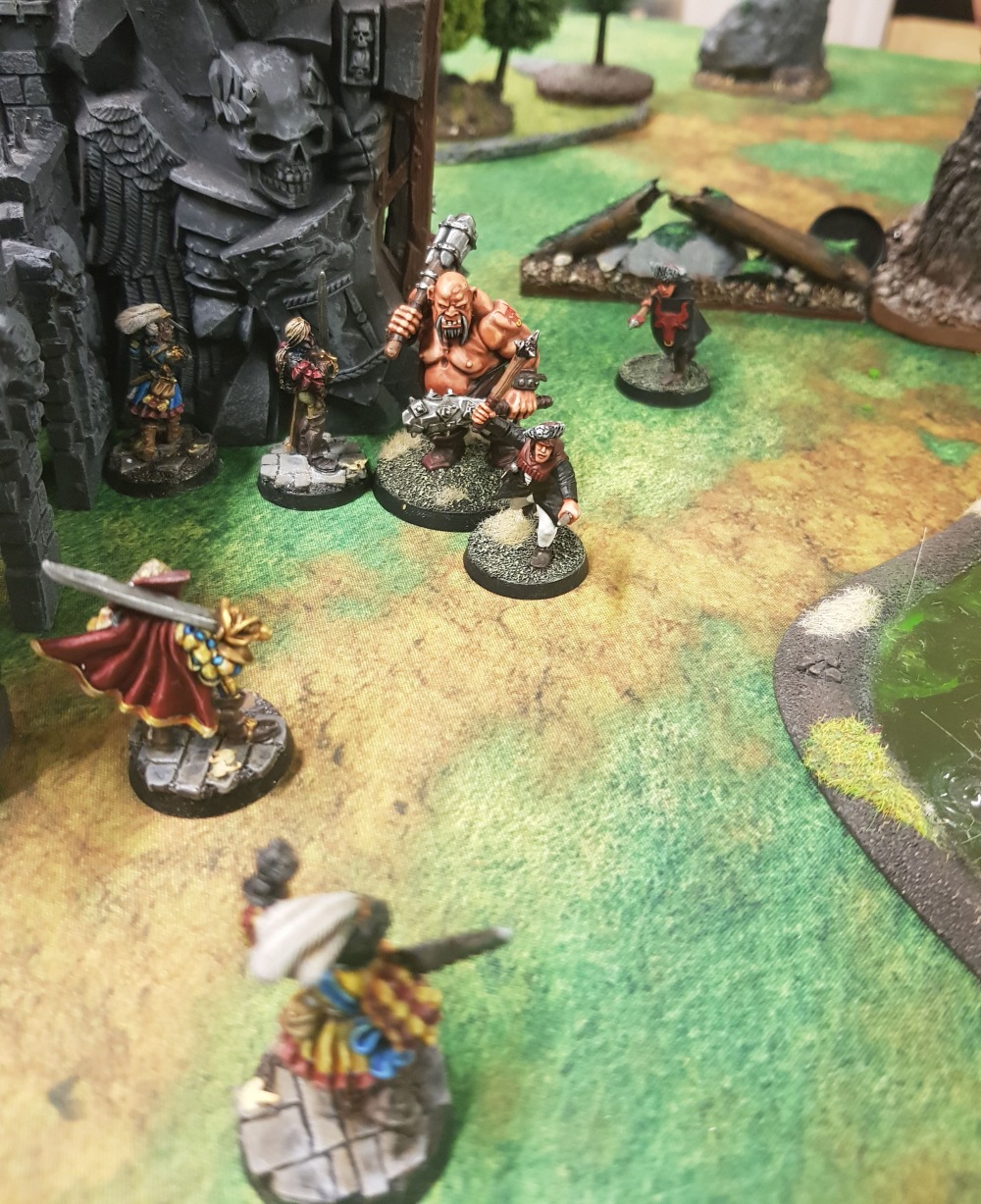 De Witt moved in to aid against the ogre and thugs charging towards the baron. 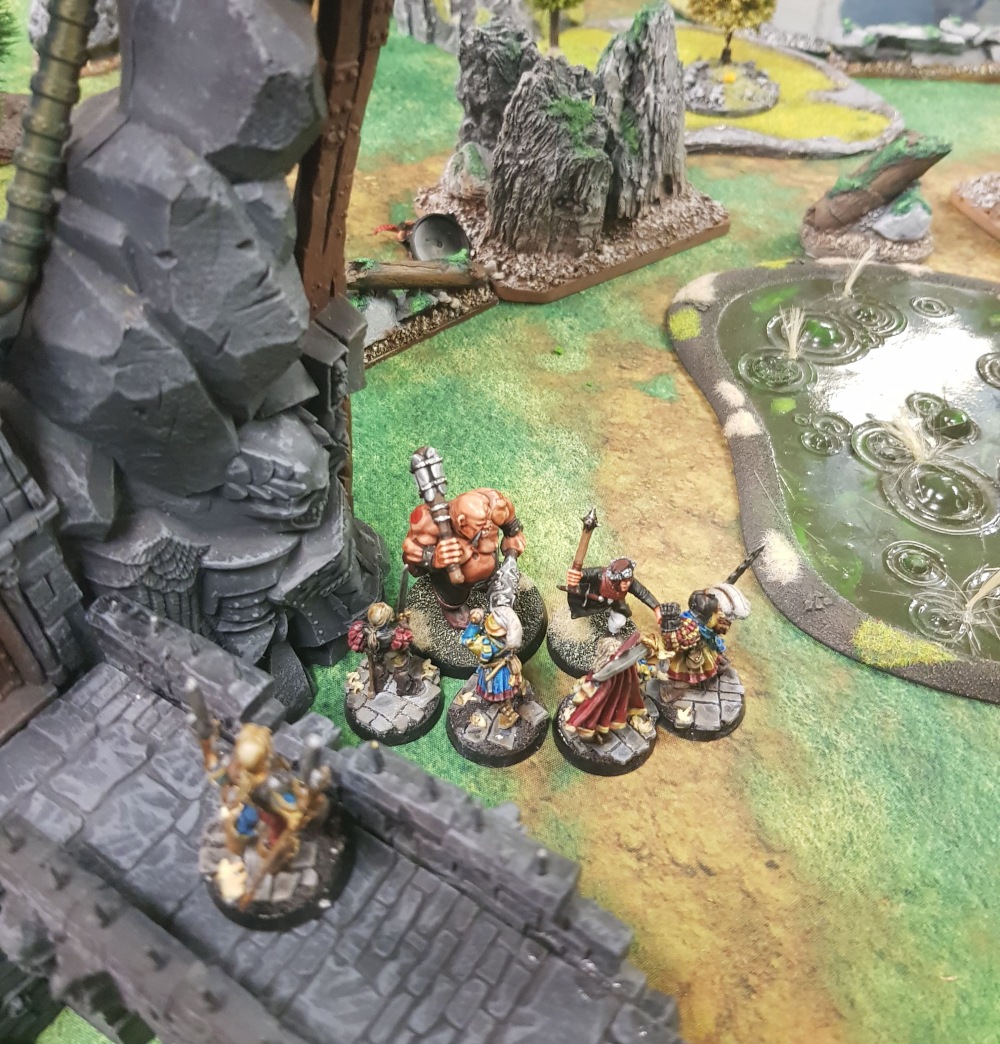 Francois once again showed his worth with pistols, an iron slug piercing the skull of a charging enemy spearman. The man collapsed like a rag doll, his wild charge ended instantly.

Van Dorn knocked the other charging peasant to the ground himself, allowing de Witt to deliver a finishing blow. Suddenly there were four men of Marienburg against the ogre brute.

However, Cornelis and Maarten were finally overpowered on the right flank, and the enemy was engaging Jakob and one of the bergjäger in close combat, an unfair battle. 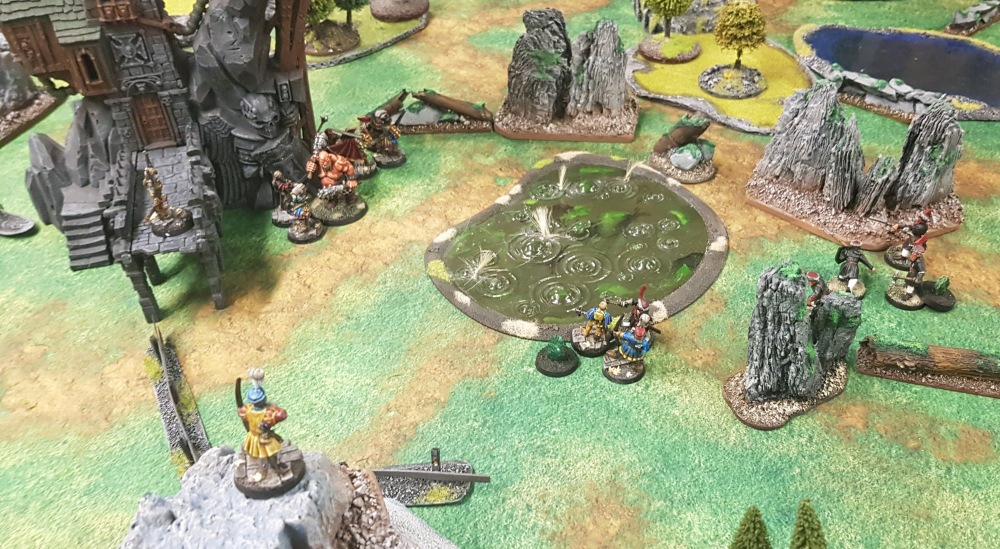 Another two thugs appeared to aid the ogre, a spellcaster and a skilled fighter. De Witt and the baron had to engage one each, putting them at great risk. When the ogre knocked out one of the Marienburgers and both Jakob the youngblood and a bergjäger were knocked out, the Marienburgers pulled back, unfortunately leaving two stones in the hands of the Ostlanders.

I had four men down, all 3 fighters and my hammer youngblood. The Ostlanders had 3 henchmen down. One henchman was dead on both sides.

We both got about 90 gold from selling our shards. The Ostlander heroes pretty much all got an advance, while everybody except the baron got at least one level on my side. I did not get any “lads got talent”, but got several nice advances.